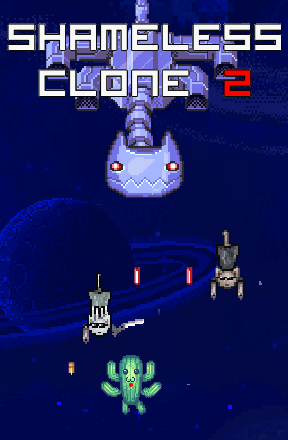 How could Roman Squall and Yuriy Kurenkov possibly top the shameless clonage of Shameless Clone, that awesome melting pot of bullet-hell and internet culture? Why, by making a sequel of course! In retrospect, the answer seems obvious. It's Shameless Clone 2, the arcade space shoot-em-up that rips off ALL the things! However, the title is a little misleading, since this time around, there's even a bit of a plot happening. It seems that the huge space invader Kosmos (no relation to that blue-haired Xenosaga dame) has infiltrated the world of human imagination (or, at least the more meme-tastic section) and has perverted its creations for evil!... Okay, Kosmos didn't really need to pervert it all that much. C'mon. It's the internet, after all. But still, those things need shooting, so the World Shadow Government has assembled a team to travel to the world of imagination and save humanity from Kosmos' threat! The plot kind of falls by the wayside pretty quickly, but who cares? There's stuff to shoot!

You start by choosing your warrior. At the start of the game only the pirate ship is available, though others are unlocked as you progress through the game. Each have their own special attack and a hitbox a mere pixel in size. Use the mouse to fly around screen and hold the left mouse button to fire on all manner of Moogles, Goombettes, Troll Whisps, Orange Anime Ninjas, and Prime Optimuses. Defeated enemies release coins which, when collected, charge up your hate-bar. When the hate bar is full, hit the [spacebar] to launch a super-attack. Collected coins can also be spent on store upgrades between levels. Other enemies release different bonuses: shields, explosions, or a convenient transformation into Bill "Mad Dog" Rizer, spread-shot enthusiast.

Shameless Clone 2's shiny gloss of memes may be its most noticeable feature, but as a shooter it has surprising depth and intensity. The baddies are varied (though bosses can be a grind), the scenery fun to look at, and the patterns of bullets to avoid are quite challenging without ever seeming unfair. Of course, one could say the same about the original Shameless Clone, and that's the rub. Despite all the added stuff, Shameless Clone 2 feels much more like an expansion/remake of the original than a new work per se. Actually, while flash works usually don't have "Game of the Year" editions, that really feels like the most apt comparison: it's has the solid base of the original, with bugs fixed and "what would have been DLC if the developer thought people would pay for it" bells and whistles added. This makes Shameless Clone 2 a perfect jumping on point for those new to the series, but may leave those who played the original wanting more. That said, Shameless Clone 2 is undeniably a quality work, and if it's one thing we know, it's that no one ever lost face by repeating themselves on the internet a little.

Pretty easy, though not bad. Other than the Norris expy, is there actually anything else added by playing off of the 5Games site rather than through here?

[Nothing that I'm aware of. We're linking to 5Games in our review as a special courtesy to 5Games in return for a link back to our review in the distributed version of the game. -Jay]

Good overall, but some major flaws.
Difficulty curve all but nonexistent. You have to TRY to lose. Upgrading health is completely pointless as you'll be pretty much invincible after upgrading bonus drops to a certain level.
Cash gain ramp not high enough to keep up with upgrade prices, so some money grinding will be needed.

I'l agree with Andrew some on some points.
The health upgrade is not needed except maybe a boss or two. Cash gain in slow, I had to play the first 2 world again when I needed to do more damage.

The one thing I will argue is difficulty. It is only matched by how you upgrade your character. Don't focus on damage or bullet ports, the bosses can be long and result in you in the direct line of fire.

Player wise only the octo-cat and anime girl specials seem good. The cactus makes it easy to miss coins and the pirate too spread out.

I have basically the same opinion as the other reviewers. Gaining cash is slow, with the exception of

the first level of the 8-Bit world. By following the long line of bricks on each side of the screen (clearing out one side, collecting the silver coin from each, and then flying over to finish however many you can blast on the other side) you can easily gain about 2,000 coins with every play. Maxing out your number of bullets and rate of fire makes this very easy.

The collision detection is truly lacking. The enemies' bullets seem to need to pass through a magic pixel at the center of your character's sprite to register a hit; makes the game too easy.
Once everything is maxed out, which happened early in the Anime level for me, the game just becomes too easy and too repetitive. Unfortunately, I didn't have the patience to finish (or even begin) the final world.
Also, the timer aspect is never fully explained, at least not that I saw. Most of the time, the time runs out and you still go a little while longer until you get the "You Win" notification. There doesn't seem to be a way to speed up your character. And on a similar note, there a few spots in the second-to-last world where the enemies are dispatched in a very fast manner and then there is a loooooong wait for the next wave, as if the enemies should have taken a lot longer to kill and the game is giving you plenty of time to do it.
All in all, I'm not too impressed. Fun when you start out, seeing all the meme references is fun, but ultimately it just gets too mundane.

I'd say this game is a lost opportunity. It could have been great.

Other reviewers are right, this game was way too easy. I doubt anyone would have to try very hard to easily make it through the game. You almost have to try to lose.

Well I enjoyed it for the harmless fun blastem up it was, It is supposed to be easy, that is the whole point, it is a total send up of the genre.

and @Cornelius, yes that, again, is the whole point - you are invincible! Your hit box IS one pixel, it is not bad collision, it is just a bit of fun.

Sometimes folks, you need to take a chill pill, and just realise that all is not what it seems, or rather, what you expect

^There is nothing wrong with only having the center be vulnerable, that's it is in all the bullet hell shooters, the problem is that this isn't bullet hell.