Do you feel like you never have enough lives when playing a platformer? Are you tired of collecting mushrooms, rings and stars to piece together another measly life, only to lose it instantly? Then step right up and play Shadowscape, a high-difficulty platformer where you gain lives just by moving around. It's that simple! Well, not exactly, actually. While you're using the [WASD] or [arrow] keys to move and jump, a bar on the left will keep filling up and supplying you with lives. But this only lasts until the clock on the right is white; when it turns red, the bar starts working against you and you'll lose a life every once in a while just for dawdling. 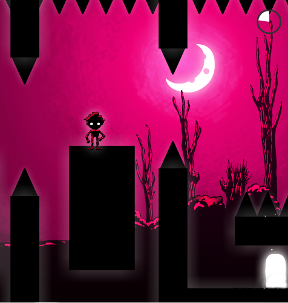 Shadowscape tells a subtle story of the interplay between light and darkness. Up to level 52, the little protagonist will fight the darkness around him in a LIMBOesque atmosphere, trying not to be squished by moving blocks of death and spikes of misery. But then he finds a dazzling white... thing, and the landscape changes together with the gameplay. Whereas before you were only able to jump once, now you can jump as high as you like as long as you keep pressing the key quickly enough, and with this we enter the treacherous realms of Flappy Bird. Negotiating your way between dark platforms (which kill you as soon as you touch them) while staying in the air is diabolically frustrating, but the levels are simple enough to convince you to keep playing. The checkpoints are dictributed somewhat arbitrarily, but they are a great help, as you can always restart from them with two lives. The achievements will also lend a helping hand, rewarding you with extra lives, which is nicely ironic if the achievement is for dying a hundred times. At times, Shadoscape seems almost easy, but don't let that fool you – this little rascal of a game has a lot of tricks up its sleeve and doesn't mind making you suffer a little.

Not a bad game, platforming was fluid and it wasn't too frustrating. Interesting that you'd choose Matthew 4:16 as your theme, I've been looking for games with a Christian theme!

Glad you liked it, qazwsx988. :) If you're looking for games with religious themes and you don't mind horror, you might want to check out Godlimations. He tends to do point-and-click adventures with horror and mysteries at their core, but also do frequently feature religious overtones to the story and themes. (As I am not Christian myself, I can't speak for how Christian these games might specifically be, but they sprang to mind!) https://jayisgames.com/tag/godlimations

Maybe if we get a few more quality religious games, it might be time to start a tag for the people who want to find them!

am I the only one who thinks it seriously incompetent not to give separate abilities to turn off music and sound FX? i can't be the only one who hates being subject to constant, repetitive music, but wants to hear the sound FX. it really hurts a game to have to play in silence, but i can't handle the music.

jeemeyel, I feel with you. I do not get it why it has been become a trend to take this ability away from the user.

What does this game have to do with Flappy bird? Seriously? Is it now cool to namedrop it anywhere?

It's a matter of opinion, and I dislike Flappy Bird with some intensity. The "light" levels with their mechanics really did remind me of Flappy Bird; I wouldn't have mentioned it otherwise.

Do you know the title of the music? It's amazing and I want to know it to listen the song. Thanks!

Nice game but I don't think it warrants the high difficulty tag.

With such quick respawns and short levels, I wouldn't consider this game difficult. It's a decent platformer: not the most creative with level design but also not too repetitive.

I wasn't impressed with the narrative, but it was good enough for such a quick-paced game. I didn't read all of the writing on earlier levels due to the timer, but I don't think I missed much.