You were just a young, uneducated street punk when Raymond Black took you and fellow gutter-punk Duncan in, and though it's been eight years since you've seen the old man, you can't deny that with the lessons and new lease on life he gave you, he's the reason you're still alive today. So when in Harebrained Schemes' indie strategy RPG Shadowrun: Hong Kong you get a message from Black begging you to come find him, you head to the rainy, neon streets. Unfortunately, Black is nowhere to be found, hasn't been seen in weeks in fact, and your old friend Duncan, who isn't too pleased at the way you took off on your own all those years ago, paints a picture of your former benefactor as an increasingly paranoid and disturbed man. Soon you're running for your life... from the police that control the city and have framed you for crimes you didn't commit, from underground gangs that smell blood in the water, and an increasingly set of disturbing dreams involving lots and lots of... teeth. Thanks to the timely intervention of dwarven dekker Is0bel and rat-shaman Gobbet, you wind up working with the dangerously temperamental but coldly brilliant triad boss Kindly Cheng who agrees to help you stay hidden... for a price. In a world rich with danger, mythology, and secrets, you're about to become a Shadowrunner for the first time, but whether you sink or swim is still up in the air. And then there are those disturbing nightmares you and everyone else near the Walled City of Kowloon have been suffering. Harebrained Schemes delivers a story-rich, clever, and challenging installment to their Shadowrun series packed with memorable characters, tactical battles, and more. 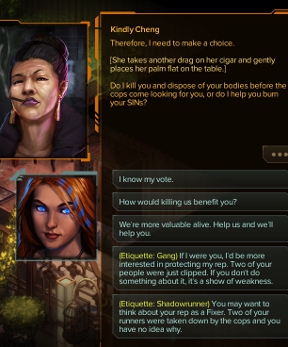 Shadowrun: Hong Kong plays much the same as the first two games... a top-down adventure where you explore and interact with people, broken up by turn-based strategic combat that makes heavy use of cover and Ability Points. Instead of gaining experience from defeating enemies, you use Karma, gained sparingly by completing various missions and plot points, to enhance your main character's abilities, and if you're smart, you'll make a hero with a focus in one particular area (fighting, spellcasting, dekking, etc) rather than trying to be a jack of all trades and master of none. You'll frequently be presented with unique dialogue options depending on everything from your statistics to your background, some merely cosmetic, others offering different ways to overcome obstacles. Battles themselves are rarely straightforward slaughters, though you can light up your enemies if you want. More often, you'll need to accomplish objectives within a certain number of rounds, take out optional targets, manipulate your surroundings to do the dirty work for you, or just be able to run away. A Shadowrunner is nothing if they aren't resourceful.

The biggest change from previous installments is the revamped Matrix, which is a lot more dynamic. You can duke it out classic combat style with the patrolling enemy programs, but it's a lot more rewarding to stealth past their patrol routes and actually manually hack the timed, coded locks on data. Though a little awkward to get the hang of at first blush, and not something that necessarily feels like it clicks with the rest of the gameplay style, it's a surprisingly tense experience. Other changes are more subtle, like a revamped inventory UI, the ability to draw your weapons and potentially get the drop on enemies as soon as they're in view, or the expanded cyberware upgrade trees and spellcaster foci. Harebrained Schemes has already demonstrated a determination to not rest on their laurels by continuing to flesh out, expand, and polish their Shadowrun gameplay with Dragonfall, and Shadowrun: Hong Kong continues that tradition in spades. It might not feel massively different from its predecessors, but it shines just as bright, if not a little bit brighter. Of course, some things never change, as you'll still be prepared for any totally shocking ambushes by noting the sudden appearance of cover-creating rubble and furniture in your surroundings. Life tip, children... always be suspicious of strategically placed furniture. 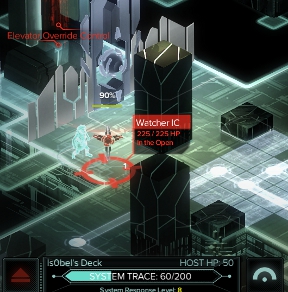 Interestingly, Hong Kong feels like it's finally worked at least some of the kinks out of the combat's tendency to have characters miss anything other than high 80s-90s accuracy chances. Which is good, because combat can be fairly brutal... when it happens. There's a surprising amount of missions you can waltz through unscathed, whether by talking your way out of it or just because there was no combat to be had, and as a result, the game can feel a bit dialogue-heavy, even for an RPG, in a way that occasionally jostles the pacing. Some missions, however, are clever enough that they make up for it. One involves you talking your less physically and socially adept team member through a series of confrontations via comm. When your own character is accosted while she's still parroting everything you say unawares, you have to figure out what to say that will satisfy both suspicious parties. It's just one instance where there's no obvious solution, no simple skill check, and it makes you think on your feet in a fun and unexpected way.

Unlike Shadowrun: Dragonfall's mission hub, Heoi is a lot slower to open up and feel like home, as more people turn up to interact with as you progress, and relationships develop with them in the process. Within the Shadowrun universe, Hong Kong has no government, being run entirely by megacorporations, and the world in the game is a rain-slicked, shadowed, neon-lit realm where people jostle and bite for power while everyone else struggles to just get by. It makes for an intriguing and volatile environment to explore, one where you're very much the outsider, something that reflects in the gradual way Heoi and its people open up. Harebrained Schemes is adept at weaving in this world-building between the main plot, which is actually fairly complex in a "every RPG has a great evil" sort of way. There's a lot of nuance to the characters you meet, from Reliable Matthew's feelings on drones, to rigger Racter's plans for the human race. The areas, by contrast, are sort of a mixed bag. Environments in Shadowrun: Hong Kong are, visually, the best the series has done so far. They're sprawling, beautiful, detailed... and, sadly, don't usually have the interactive content to fill them out, so they tend to feel empty. Despite this, Shadowrun: Hong Kong is still easily just as engrossing as its predecessors. It's superbly written, full of variety and player options, to say nothing of challenging battles, and even has several different endings. If you love strategy RPGs with depth and character, Shadowrun: Hong Kong won't do you wrong, chummer.