Originally available as DLC for Harebrained Schemes' lovely indie turn-based strategy RPG Shadowrun Returns, Shadowrun: Dragonfall - Director's Cut is a polished, standalone version of the stellar cyberpunk campaign that improved on its predecessor in all the very best ways, and also available for iPad and Android Tablets to boot. Taking place in 2054 Berlin, in a world where shamans, orks, elves, "deckers" and street samurai work alongside humans, trolls, and dwarves, you find yourself on what should be a simple job with your old friend Monika and her team. When things suddenly go very, very wrong, you not only find yourself trying to unravel a deadly mystery before it gets you first, but you're also now in control of a group of Runners who, frankly, don't know or respect you very well. You'll need to prove yourself to them and the city, but now that it's clear you have the attention of some very big powers, you might not even survive. With snappy writing, an engaging story, memorable characters and even more choice and freedom than before, Shadowrun: Dragonfall - Director's Cut is a top-notch RPG that addresses nearly every complaint about Shadowrun Returns without losing the things that fans loved. 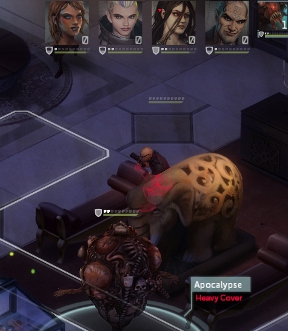 From a mechanics standpoint, Shadowrun: Dragonfall plays exactly the same as its predecessor. You still create your character, selecting their gender, race, and class, allotting Karma points to skills, and spend your time exploring the city, taking on quests for the various characters you meet, and getting shot at. Or stabbed. Or set on fire. Combat is still turn-based, as you control your party members one by one to make them take advantage of cover and spend Action Points to attack or otherwise help out. Right off the bat, if you played the original then you'll be relieved to encounter Dragonfall's option to let you save anywhere (something that was also patched into Shadowrun Returns later on), a much-needed improvement. Battles are still extremely long in most cases and can be brutal even on normal difficult, but being able to save whenever you like, even during combat, can make a huge difference. The issue with the way your to-hit percentage chance still seems like it tends towards misses even when you have a high percentage to land a blow, but hey, at least that extends to your enemies too. There's nothing more frustrating than seeing your towering warrior companion whiff harmlessly above the head of a thug standing within kissing distance while the guy behind a pillar on the other side of a room lands a shotgun blast into a character partially obscured by cover, so equal opportunity Stormtrooperism at least makes it tolerable. The inclusion of armor is a nice touch, and the redesigned interface doesn't hurt either. 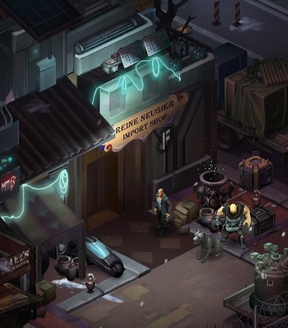 Arguably the biggest issue with Shadowrun Returns was how painfully linear it was, rarely giving you a chance for any significant choice, or even to use your class-specific abilities outside of the fights that often felt like the game's primary focus over its story. Dragonfall fixes that by making you feel like you have an impact in the world beyond what you're putting bullets (or magic, or knives... ) into. You're still following a very specific plot, but now you're not being shunted from one map to the next. There are more optional quests, more chances to wander around and talk to people, helping them out or not, and many more places where your class specific abilities or skills can be used to solve problems in a variety of different ways. Monika's group is diverse, and getting to know them and win their approval feels rewarding, from disconcertingly efficient street samurai Glory, to non-nonsense, distrustful but incredibly capable Eiger. Heck, they even give you a doggy. A lot of your time is spent working out of and returning to a central hub, where you can chat with your party members and also interact with the locals. Most of these interactions are relatively minor as far as the main plot goes, but it helps you feel like your character is actually part of a community... people will react to the things you've done and the way you conduct yourself, and it goes a long, long way towards making the world and the people in it feel more fleshed out and engaging.

Dragonfall does tend to drag a bit in places, both with those overly long, multiple waves of enemies-style battles I mentioned as well as with some areas that might be a bit too big for the amount of interaction with them. Most of the big reveals and plot twists tend to be fairly obvious, so the other characters will react with shock when you've probably already figured out where the story is going. Still, Shadowrun: Dragonfall knows how to execute those twists and reveals with just the right amount of flair and camp, and there's so much to see and do that you really won't mind. The included content creator, which allows you to make your own campaigns or otherwise mod the game, is simple to use, so it's a shame it hasn't seen more use. (Not everyone can be the custom content dynamo that was Neverwinter Nights.) The bottom line is that if you enjoy Shadowrun, and especially if you liked Shadowrun Returns, then Shadowrun: Dragonfall - Director's Cut is a no brainer recommendation. Even if you've never touched a Shadowrun game or other piece of material in your life, it's a great entry point into the world, and just a great strategy RPG besides.

I don't think the game is ready for for iOS yet, at least on an paid. There is one mission where it is impossible to progress past to the end if one summons a spirit or drone. Others have noted this problem on the App Store's customer reviews of this app. What is odd, is that it looks like it is a similar problem that showed up on the Steam version of the game. This is the scene that is broken for some:

I expect games to be buggy, but I also think the best game designers note flaws publicly and state if they are going to work on fixing the problem.

This series has a lot of potential, and this newest title is a step in the right direction. There is more roll playing, and dialogue trees change depending on how one answers. This can affect the outcome of future trees, as well as combat. It is possible to pass some of the scenes without firing a shot, that is something that I love to see in an RPG. The artwork is fantastic and the music has a hint of Blade Runner in it at times. The atmospheric sound and some of the music has definite loop endings and beginnings, and and at times breaks the immersive sense that the visuals and story created for me.

I'd buy it again if the game stopping mission bug was fixed. I'd recommend it if the developer noted that there was bug and they were working on it, but for now I'd stay away until it is a little more stable or it is restricted to only the newest devices.

The problem with the game bothered me so much that I decided to post on JayIsGames after being a longtime reader that never posted before. I've contacted the developer, and haven't heard back, but that was just a short bit ago.

Hey deadwriter! Thanks for sharing. Obviously when I'm reviewing a game I only have my own experience to go by, so I appreciate you bringing this matter up so others are aware. I'm sure Harebrained Schemes will get back to you soon... hopefully it's simply a matter of everyone slowly getting back to work after the holidays! They seem pretty active on Twitter, so I might suggest poking them there if you don't get an answer.