ERS Game Studios' hidden-object adventure game Shadow Wolf Mysteries: Under the Crimson Moon tries to strike a balance between the modern werewolf (smouldering, tragic) and the classic (MY FACE MY FACE IT'S EATING MY FACE!). You've been called to a remote village that's been suffering from a slew of wolf attacks by a woman who believes she was bitten by a werewolf, though her brother insists it's just hysteria brought on by the death of her husband. You'd think he'd be a bit more open to the concept what with the slavering monstrosity you see capering on the rooftops the moment you arrive, and the fact that everyone suspects another young woman, who survived a wolf attack as a young girl, of being behind a slew of grisly murders. Everyone is paranoid and pointing the finger at everyone else, but it's clear something is going on here. You've begun having strange, menacing visions ever since you arrived, and that bloody moon in the sky is seriously creepy. To find the truth you'll have to go on a beautifully presented and surprisingly intriguing adventure filled with plot twists galore, and the ability to stare at people and find their every flaw as a gameplay mechanic. Yeah! Take that crippling social anxiety, it's my turn now! 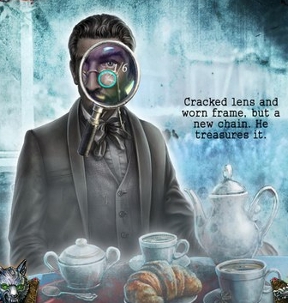 Surprisingly, Under the Crimson Moon does a lot to try to add to the classic find stuff, use stuff gameplay you might be expecting. Sure you'll still have to deal with hidden-object scenes, but many of them are themed rather than a simple list (find all metal items, for example), and if you don't like sorting through junk piles, you can also opt to play a mini-game that has you connecting matching tiles with clear paths. Occasionally you'll find unknown items that need to be analyzed, which consists of answering a series of questions about each object, before they can be used, and when you first meet people, you're also given the opportunity to scrutinize them good and hard for clues about their character and things they may be hiding. Shadows under someone's eyes might mean they're sleeping poorly, for example, while soil on a young lady's finery could point to wilder pastimes than needlepoint. Most of these new additions are admittedly sort of perfunctory in the long run, but they still break up the routine that most other games in the genre fall into in a welcome fashion, actually making you feel like you're doing honest-to-goodness detective work. Even the puzzles, while familiar in concept, have little twists in them that make familiar ideas just a bit more challenging.

Apart from the backtracking, Under the Crimson Moon has a few more flaws related to its fancy new gameplay ideas. Peering at people for clues is a nice touch as far as storytelling goes, but having to pan the magnifying glass over every inch of them to find one tiny clue that isn't visible unless you're magnifying that specific area is a pain. Likewise, the "find items that fall under this umbrella" approach to hidden-object scenes can lead to some confusion when you're trying to figure out what, for example, qualifies as "werewolf-related" in a pile of random trinkets and nick-knacks. Still, take those quibbles for what they are, quibbles, because Shadow Wolf Mysteries: Under the Crimson Moon really is a cut above the rest. The artwork is gorgeous, serving to engross you in a story and characters that feel considerably more complex than your average hidden-object adventure typically calls for... though it can be rather annoyingly broken up by a substantial amount of backtracking every time you make any progress. Shadow Wolf Mysteries: Under the Crimson Moon isn't perfect by any means, but it's one of the first hidden-object adventures in a long time that really feels as if it's straining hard to evolve. If you enjoy the work of ERS Game Studio but have often felt like their games followed too distinct a pattern of late, be sure to try the demo for this, because Under the Crimson Moon is a beautiful and surprisingly inventive hidden-object adventure that's well worth a look.