There are a lot of things that can stand in the way of a good wedding. Bad food, karaoke, too many ruffles, or a relative insisting they lead everyone in "The Wobble"... but a werewolf shouldn't be on the list. When Veronica spies the werewolf that has been harassing her family for generations outside her new estate, she knows trouble has followed her all the way to Paris... fortunately, she also knows she can call on you for help, to put an end to this curse once and for all. You know. Until the next installment in ERS Game Studio's hidden-object adventure series hits, hopefully titled something like Shadow Wolf Mysteries: The Wolfening. Shadow Wolf Mysteries: Cursed Wedding plays it safe in terms of familiar and reliable gameplay, but delivers a lavishly designed adventure with a light topping of Victorian-style thrills and chills. Awwwww, yeah. Like a sir. 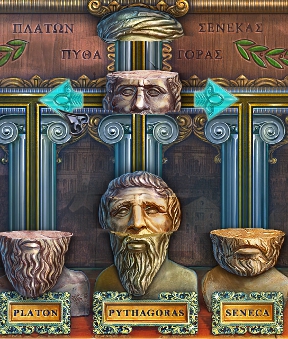 Your job here is to keep Veronica and her future husband safe by finding out a way to expose the werewolf... harder than it sounds, since this particular breed is not only able to disguise itself in human form, but hold others in its thrall to do its dirty work, like a hypnotist or Oprah Winfrey. Bad news for the werewolf is, you're a master detective, and you're not going to stop until you've laid it to rest for good. Solve hidden-object scenes and puzzles to get items of use, and keep your eyes open for clues to the werewolf's identity and legacy. Every door or obstacle you'll encounter seems to be missing a piece to it as well, which makes me think Veronica's betrothed might want to have a talk with whoever he had build the estate, but it at least gives you an excuse to be extra nosy and track down items and secrets everywhere. 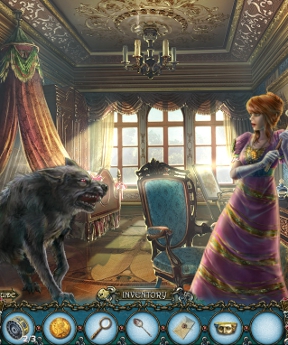 Analysis: ERS has always been one of the reliable benchmarks for quality when it comes to hidden-object adventures, but Cursed Wedding stands as a great example on how hard they've worked to improve that quality since the beginning. The full animation that now moves each character looks leagues better than the creepy breathing and blinking of the first title, and lends the typically beautiful artwork and environments a life of their own. Similarly, more effort has been made to make the puzzles more creative in their execution. None of them are what you would call difficult, but the clever twists on presentation make them fun to fiddle with... which is good, since there are quite a lot of them. The game still hasn't quite shaken its predecessor's habit of being almost painfully easy in regards to adventuring, with items usually handed to you just as you need them, and there's typically very little guesswork ever involved in what you need to do, with yourself or your inventory. The result is an experience that feels decidedly on the rails, leading you by the nose, and while the game as a whole is gorgeous and immersive, you'll still wish you were given more cause to explore or use your brain a little.

Shadow Wolf Mysteries: Cursed Weddings is one of those titles that plays it safe. It doesn't really pull out any unexpected tricks in terms of story or gameplay, but works exceptionally hard to deliver an entertaining adventure in the process. Though you can expect a lot of backtracking and repeated hidden-object scenes, Cursed Weddings bounces you from scene to scene with character interaction, exciting moments, and a fine coat of polish, all at around four hours or so of play time. If you already love hidden-object adventures, then this is another solid addition to the genre, and proves that ERS is far from getting long in the tooth (fang?) when it comes to delivering quality titles with bite.