Septerra Core:
Legacy of the Creator

Septerra Core: Legacy of the Creator is an isometric role playing game designed by Valkyrie Studios and released in 1999. The game had a rocky start, with its development team struggling to find a publisher, but when the title was finally released, reviews were extraordinarily positive, with many publications calling it "RPG of the year". Septerra Core's story is rich and intriguing, weaving an intricate steampunk-style world that's thick with history and interesting characters. 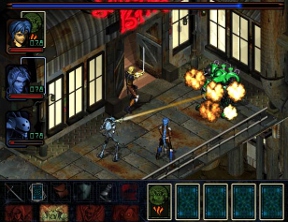 The world of Septerra is built around a series of world shells that are bound by a spine that supports the core of the planet. Each shell has its own environment and inhabitants, some of which are mythical in nature, while others are the downtrodden peasants of the world. As the game begins, you are in control of Maya, a young woman who lives in a town called Oasis on the second shell. Here, most citizens collect and convert junk tossed down from the first shell, the world inhabited by the Chosen. The mayor has repurposed some of the work 'bots a friend of Maya's created, and one of your first tasks is to investigate the events surrounding this. Naturally, that leads to something even bigger, and the story of Septerra Core opens wide.

Gameplay is point and click based with keyboard shortcuts available to make things a bit more convenient. You explore the world of Septerra by clicking where you want your party to go, double clicking to run, and single clicking on characters/objects to interact with them. The cursor changes when you hover over something you can use, so don't be afraid to mess around with everything you see in the game.

Combat works a bit differently than most role playing games. For starters, there are no random encounters, which is a welcome break for many RPG fans, especially the more casual ones. Once you enter battle, each participant takes his or her position on the field, and your character's meters begin to charge. Meters are divided into three sections, each allowing a more powerful attack than the previous. So, if you wait for your bar to fill to 1/3, you get a basic attack. Let it fill to 2/3 and you get something even better. While you're waiting, the enemies are having their way with you, so a balance must be achieved. 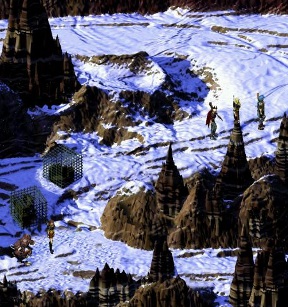 Magic points, called "core power", are shared between party members, and you use Fate Cards to cast spells. These cards can be found and used individually or combined to form more creative spells. At first, magic doesn't seem very useful, but later in the game, when you build up a stock of cards, it becomes an indispensable part of your strategy.

Analysis: Septerra Core isn't a new game, but it's aged remarkably well. The visuals look suitably dated, but the gameplay manages to feel mostly modern. The first part of the game is a bit slow, featuring a lot of backstory, a few fetch-style quests, and plenty of dialogue. Afterwards, expect a lot more combat and some massive dungeons capped by rough boss battles. The level of challenge in the game is spot-on, and as long as you keep your equipment up to date, you won't lose too many battles.

With the gameplay details out of the way, let's discuss what makes Septerra Core so interesting. Just like Tolkien expanded Middle Earth to include ages before the story took place, so Septerra Core uses spoken legend, mythical tales, and knowledge lost to the passage of time to make its world more complete. It creates a strong sense of mystery and allows the player to wonder about the origin of nearly everything in the game. Almost everything about the game is directly connected to the story

Years after its initial release, Septerra Core still offers a superb RPG. The story is a pleasure to experience, the setting and visuals are inspired, the combat and item systems are solid, and even the voice acting is top-notch. It's easily a 50 hours trip from beginning to end, and you'll be hooked from the first loaf of bread to the final battle.

Yes! For years now I've been trying to remember the name of this game, and now I know it again. Thank you for reviewing it.

That being said, I played this back when it was new (Fall '99) and it's an excellent game that anyone who loves RPGs should check out.

Wow, I was very excited to see this game reviewed here. I remember playing it when it first came out and loving it. I had been thinking about this game recently and couldn't remember the title, so thanks for reviewing it!

This game rocked my world back then. Awesome story, some light puzzles, cool characters and upgrades, interesting magic system. Nice enough story. I recommend it.

I followed Septerra Core's release drama closely back in 1999. I was so scared it wasn't going to be released, and when it finally was, I rushed out and bought the pretty boxed copy. Still have the CD packed away. :-) Great game, and I was pleased to see it's still quite good after all these years.

Wait, what? Septerra Core? Freeware?
Strongly recommended for any RPG fan - hours of playtime, excellent plot and really well thought-out battle and magic systems make this one of the all time greats of the genre.

if anyone plays this game again, please do me a favor. this mystery has been bugging me forever.

there is a place to use the explosive in the early game graveyard area. the thing is you get the explosives later and have to use it for the main plot, so you forget about going back to the graveyard. I have always wondered what was in there.

Oh man, a blast from the past. I can't believe it's been 11 years since this game came out. This used to be an obsession for a younger me. After seeing this posted, I decided to find my old disc and reinstall the game.

The game is still fun, and I love being able to play it on a computer that is more powerful than what I had so long ago. My only complaint now is how slow combat feels. I wish there was an option to speed up the battle flow. Other than that, this game is still fun and I can't believe I forgot about it for so long.

Thanks John for pulling this out for us to check out!

Can anyone who has experience with this game help me out? I can't work out the combat system. The attack bar fills up, and I wait until the monster stands still, but no matter where I click I don't fire, and the stupid beast just keeps chomping me. Confused!