Secrets of the Dark: Mystery of the Ancestral Estate

A young woman named Dayona calls you to her sprawling Mediterranean estate. She's got a problem with things going bump in the night and she thinks maybe, just maybe, it might be related to the crypt built into her foyer that constantly emits eerie howling, beams of light, and sickly green faces while making the whole room shake. Bless her little heart. Of course, I can't make fun of her too much, since your bright idea when you find the shaking, moaning, be-demoned coffin causing a ruckus down there is to immediately open it, letting loose the ancient evil inside that carries Dayona off and sparks the start of an ancient prophecy. Way to go, Inspector Gadget. Sam and Dean you ain't, but maybe you can set things straight in Orneon's campy-cool hidden-object adventure Secrets of the Dark: Mystery of the Ancestral Estate. 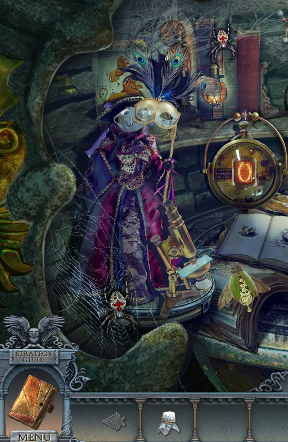 Alright, so, okay... hindsight's 20/20, and maybe cracking open that shuddering evil sarcophagi wasn't such a great idea, but the important thing is you've got the skills to set things right. Just click around to gather items, solve puzzles, and root through hidden-object scenes. Coincidentally, some of those hidden-object scenes will have you put items back where they belong, rather than take them away.

Turns out Dayona's family tree might have a few bad apples in it, to the tune of one great uncle actually being magically imprisoned by the rest of the family, which as interventions go, is pretty hardcore. Now that he's out, the whole world is in danger as the eclipse approaches, and the evil taint begins to warp reality around you. As it happens, however, these changes to your environment only persist as long as each area is dark, so by turning sources of illumination on and off, you can shift the world at will... handy since the light and dark sides of each area have different items you need and puzzles to solve. 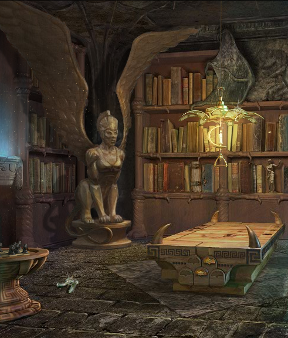 Analysis: Mystery of the Ancestral Estate is sort of an odd duck. On the one hand, despite visuals not being as sharp as they could, the environment design and overall artwork is gorgeous, and the warped demonic atmosphere sets it apart from other games that would have you slog through boring, standard houses. It's sort of like every other hidden-object game is Tamriel, and you just went through an Oblivion Gate, if you'll forgive the incredibly nerdy reference. On the other hand, the game is also lacking a bit of polish. Despite some voice acting that's... actually really, really good, none of the characters have animated mouths, leaving them just sort of staring at you while they wobble and apparently communicate telekinetically. The writing also feels like it suffers from a wooden translation, which is a shame, because the story of an eccentric, brilliant family that goes too far is actually a really intriguing one. It's creepy without being outright scary, and the emphasis on lore and magic makes this one players of virtually any taste can enjoy.

The only real flaw to be found with the gameplay is repetition, both in the game's constant back-and-forth and some repeated hidden-object scenes. It doesn't really start to take off until after you do away with the harpy standing guard to the rest of the estate, whereafter it stops being quite so formulaic. Enchanted topiaries, hidden mechanisms, magic spells... even puzzles that force you to use your brain. It's lengthy to boot, with each substantial chapter packed with puzzles and objectives. Players who prefer a bit more engaging storyline and flash will want to try the demo before they buy, but Secrets of the Dark: Mystery of the Ancestral Estate is a meaty game with the sort of fantasy-inspired atmosphere that's not too dark or too light. And here's a free tip you won't find on the Home and Garden Network... if someone tries to sell you a house with its very own glowing demon hate-coffin, maybe keep looking at other rentals... no matter how many cute coffee shops are within walking distance.