Secrets of the Dark:
Eclipse Mountain

Much like the protagonists of today's game, Orneon has just sauntered into town with a thrilling sequel to Secrets of the Dark: Temple of Night, unleashing a stunning new adventure/hidden object hybrid with Secrets of the Dark: Eclipse Mountain. Once again light and dark clash in a suspiciously empty small town denuded by yet more demons. Are you sensing a theme here? 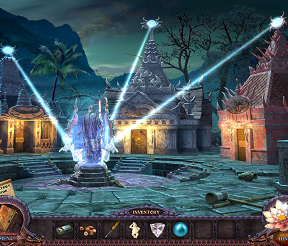 The adventure begins as you and your intrepid friend and reporter Peter leisurely wander towards a picturesque little Thai village. However, due to the fact that Peter seems to be the demon equivalent of catnip, the journey is interrupted by ravenous demonic servants who — you guessed it — kidnap Peter as part of a nefarious plan to unleash evil upon the world. Yes, again. Seriously, this is the second time you will spend an entire game attempting to rescue poor, put upon Peter and, quite frankly, dude needs to get a talisman or something so this doesn't happen a third time. It will be up to you to explore this dark region of Southeast Asia aided only by four monks who have unfortunately gotten themselves stoned. No, not high on dope, or executed biblical style, but turned into actual stone. Fortunately they are still helpful even in their statueified states.

As you explore deeper and deeper into this obscure village you will encounter a plethora of challenges that include a nicely balanced mix of traditional hidden object scenes, "reverse" hidden object scenes, and mini-games and puzzles. Collect useful items as you explore, including some that may not seem useful at all but are actually blessings in disguise. Find a particular animal skull, for instance, and if you can offer it to the correct stoned monk it will transform into something helpful, like a hammer. Other useful items can be found hanging around each scene, in both types of hidden object scenes, and lurking beneath dirt or debris. A changing cursor is helpful in distinguishing areas of interest along with a variety of sparkles, at least in the "Regular" mode of play. Many areas also incorporate the wonderful "light/dark" mechanism from the first game, where a scene is actually two different scenes depending upon whether it is light or dark when you walk into the room. Explore, solve, sneak, and sometimes brute force your way towards saving your friend and the rest of the world from the all-encompassing evil. And then dump the guy because, seriously, two demon kidnappings are enough for anyone to live through. 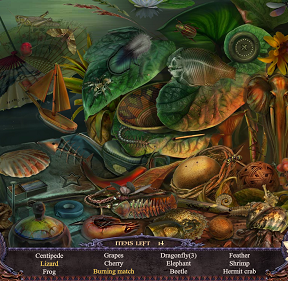 Secrets of the Dark: Eclipse Mountain offers three modes of play, Regular, Advanced, and Hardcore, each with its own difficulty level. A bottom-loading inventory helps you keep track of the multitude of items you will encounter and your journalist notebook keeps track of the story as well as the clues scattered about the place. The refilling hint timer doubles as a skip function for the mini-games and puzzles and is useful inside the hidden object scenes as well as within the larger adventure itself. All the bells and whistles of a classic adventure game are here to be discovered, along with some nice twists thanks to the fact that many rooms and locations harbor a second, secret side that expands the gameplay exponentially.

Analysis: There are now thousands of these hybrid adventure games out on the market now, and it is becoming harder and harder for one game to distinguish itself from the rest. Fortunately Orneon is one of the best designers around and they have once again brought us an adventure that is both gorgeous and fun to play with a delicate balance of exploration and gameplay that is difficult to achieve. Pacing is what makes the gameplay in Secrets of the Dark: Eclipse Mountain sing, with each hidden object scene and mini-game coming at just the right time to feel organic and move the story along, rather than feeling like roadblocks to slow down and frustrate the player. This juggling act is one of the most difficult to achieve in a hybrid and Orneon once again nails it. 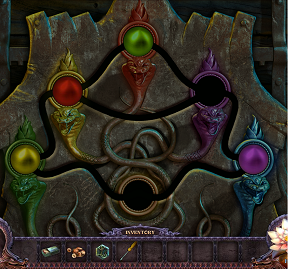 The mini-games, puzzles, and hidden object scenes are top-notch, a nice mix of familiar and challenging. The "reverse" hidden object scenes are especially nice, featuring the challenge of placing items back into the scene rather than pulling them out. The mini-games and puzzles are based on many familiar tropes such as gear puzzles, pipe puzzles, hidden match-2s, and multiple variations on sliders. Don't let the familiarity of the mini-games and puzzles put you off, for they highlight some interesting new twists that certainly change up the gameplay and make what is old seem fresh again. Nicest of all is the fact that many items needed to continue the adventure are not just strewn across the landscape like so much random junk. Instead items can be hiding under a fall of leaves, or lurking in pools of water, or just be magically transformed into something else that disguises its potential, adding another layer to the adventure aspect.

Orneon certainly knows how to set the stage for its adventures, from the lush, tropical scenery in its predominant greens and blues denoting both the place (Thailand) and the time (mostly in the dark), to the incidental sounds, haunting music, and variety of small animations that make the world of Secrets of the Dark: Eclipse Mountain come alive. Practically every game these days has bugs or other vermin scuttling across the screen, but how many also feature the rustling of leaves blowing in the wind, the haunting chirps of cicadas and other insect fauna, and the sound of water dripping, gurgling, and rushing around with accompanying animations, making for an amazingly immersive experience.

Some might complain that the "Regular" mode is too easy with its quickly refilling hint timer and cascade of sparkles and glints to point out areas of interest, but for those who like tougher adventures there is always the Advanced mode (with no sparkles and slowly refilling timers) or the Hardcore mode which, as advertised, is pretty hardcore with every hint and tip feature turned off, including the opening tutorial. There's not much else to complain about here as Orneon has produced a fantastic, fun, immersive trip that should delight adventure fans everywhere. Well, you could complain about "demon-bait" Peter, but then, hey, you're the one hanging out with him.

A Collector's Edition is also available. It includes wallpapers, a built-in strategy guide, the ability to replay certain mini-games, and a bonus adventure. Remember that Big Fish Game Club Members pay only $13.99 for Collector's Editions, and collector's editions count 3 card punches of 6 total needed for a free game.

Outside Monk's Hut and Fountain Square

Chapter 7: Return to the Hotel

Chapter 12: Return to the Museum

Congratulations! You have completed the basic adventure of Secrets of the Dark: Eclipse Mountain, and once again saved Peter Harris. Well, at least until the next time he finds himself in a jam.

Outside Monk's Hut and Fountain Square

Chapter 7: Return to the Hotel

Chapter 12: Return to the Museum

Congratulations! You have completed the basic adventure of Secrets of the Dark: Eclipse Mountain, and once again saved Peter Harris. Well, at least until the next time he finds himself in a jam.