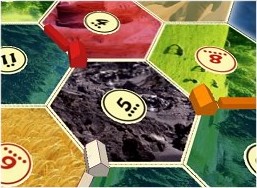 Since Jay and I have been so hopelessly busy playing Cry Wolf, I offered last night to write a review for a game that was mentioned in passing in a previous post, Sea3d, also known as Settlers of Catan.

Settlers is a board game that's been around for a number of years, but a fan of the game later created an online clone version so people could play over the internet. After great success, he later removed all references to 'Settlers of Catan' and renamed his game Sea3d, although the rules and gameplay are, to be honest, identical.

Lots of rules and a fantastic, free, and clutter-free interface make this a game that has a casual feel, but a professional presentation.

Sea3d's biggest asset, however, is its intuitive nature; despite all the rules, they all seem to fit together once you start playing, and the controls in the interface and website are easy to pick up without any preparation at all. In addition, the community of players is very friendly, and is likely to give you tips while you play.

[Edit Update: This game requires a software download for Windows!]

The game is played on a board of hexagonal map tiles. Similar to Monopoly, you place settlements (houses) on the map tiles to claim a stake in their resources. That's where the similarities end, however.

The game is extremely resource-based, and the five basic types of land tiles each provide a type of resource card:

The six corners of each tile provide a spot to place a settlement. Along the edges, you can build roads, connecting corners between tiles. Each tile has a 'chit' on it, a number from 2 to 12, representing the die roll that will activate it. When a tile's number is rolled, each settlement on its corners gets a resource card according to the type of the tile.

At the beginning of the game, players take turns placing down two settlements on the board, and a road for each. Roads must connect to one of your settlements (or roads). Later in the game, on your turn, you can purchase more roads (1 wood, 1 clay) and settlements (1 wood, clay, wheat, and sheep). However, throughout the game, no settlement can be closer than two road lengths away from another, causing real estate to become VERY valuable.

You can also upgrade a settlement to a city, by paying 2 wheat and 3 ore. A city recieves TWO resource cards whenever an adjacent tile is activated, rather than one.

Rolling a 7 in the game gives you control over the 'robber', a marker to be placed on any one tile. When you move the robber, the tile you place it on can not give any resources until the robber is moved, and you get to steal 1 card from any player with a settlement on that tile.

In addition, 'development cards', like chance cards in Monopoly, can be purchased for 1 wheat, 1 ore, and 1 sheep. Development cards include Soldier, which lets you move the robber, Year of Plenty, which gives you 2 resource cards of your choosing, Victory Point, which adds a point to your score, and the very opportunistic Monopoly card, which allows you steal all the cards of a specific type from all of your opponents.

As if this weren't enough, there are even more rules to become acquainted with: trading with the bank, trading using 'port' spots (which allow you to trade at a better ratio), the rule which causes you to lose half your cards whenever a 7 is rolled, IF you have more than 7 cards in your hand, and then the rules that come into play when more than one continent is allowed (and you can then build ships in addition to roads).

To facilitate all this, the Sea3d website has an enormous number of utilities to make gameplay easier-- a game connector, which allows you to join or start games with strangers, a ladder ranking system, a log of all games played, cheating reports, a chat room, forums, additional maps, and links to an extensive help library for gameplay. Click.

I'm also a new author to Jay is Games, so I'll be posting games too. Possibly tomorrow. So be waiting for that. OH YEAH!

Hmm, this appears to be used on some sort of ancient non-osX computer system... the rest of the games on Jay Is Games are modern games... is this retro week?

Seriously, tho, one of the reasons I read here is that the games normally run on my machines. This one doesn't... would be nice if you'd put that in the review so we don't go running about the website looking for the flash or java versions for 15 minutes (:

Sorry, you're right! I added a warning label to the front.

Hmm. . .looks interesting, and I've seen Settlers in game shops. Not really something for the "casual game" market though. Seems a bit complex. Anyway, I'm still stuck on Cry_Wolf.

i have noticed that Jay has been on AIM a lot recently, i guess that explains it. = P

the game looks great, but i'd rather not download anything to my computer. are there any similiar games out there like this?

I have heard from many people who feel that Settlers is among the best board games ever made. I can't wait to try this one. And now that Jarod has done an excellent job at explaining the basics, it will be easier for me to jump right in with it.

hmm as long as ur taking windows client download games... heres a game that ive been addictted to for over 10 years... it was called subspace, now called continuum.

i highly recommend it, its free and takes super mad skills to master, u can play against 80+ players too
its like "astroids" except u shoot at other players instead of rocks that dont shoot back...

Just for reference, "Mud" hexes are Hills which produce Brick (in standard Settlers terminology). Also, Pastures produce Wool - although it must be said, everyone calls it Sheep. :)

You'll see me on S3D a lot. I'm a regular regular! It's really a great game and community. Oh, and clay comes from hill hexes. :)

And now that I said that I see someone beat me to it... :P

I love playing this game with my friends. This one is even in English, sometime norwegian is hard tyo understand :). But this gamelooks great

This is a great site. I've played Settlers for years as a table top game, and now I've been playing for the last 5 hours today since I read your blurb on it.

My only complaint is that many times I try to join a net game and it fails to connect. It took several tries to join my first game, but once I was in it was worth the effort.

The speed and playability is fantastic compared to the tabletop version. It automatically shows you all the options so games go much quicker.

Great game Jay, thanks for finding this one!

An online JAVA version of Settlers (with or without Cities and Knights expansion) is avaiable at:

It requires a free regirstration to play, and hosts other java-based games as well.

I could run windows 98se in a qemu vm but that seems not worthwhile..

I must agree about compatibility.

I just confirmed what Hiram posted earlier: an online Java version of Settlers is available. Java is certainly cross-platform, so there should be no compatibility issues.

And I tested it on a Mac running OSX.

Settlers for everybody. If you're on Windows, then go Jarod's route and download and install Sea3d. All others, check out the Java version.

Maybe the Java version deserves its own entry?

If anything on www.asobrain.com deserves its own entry, it's their Java version of Carcassonne.

It's a cross between Settlers of Catan and dominoes. My wife and I got so hooked we bought a set (in the real world) along with every expansion. There's no game quite like it reviewed on your blog here.

Has anyone had luck with Sea3D and Windows Vista? =(

I have windows 7 and can't get Sea3D to work on my computer. It seems to think its a zip file when it's really an .exe file. Any suggestions?