Sea Journey is... well, it's Puzzle Quest with pirates! Built around a tile-swapping Bejeweled-like game, you venture into the great blue ocean in search of treasure, upgrading your vessel along the way. Each match-3 game you play is a fierce battle at sea, complete with cannon salvos and mystical spells conjured by talismans. 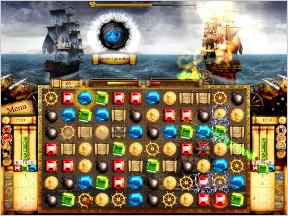 You begin as a lowly merchant equipped with a small, weak merchant's ship. After a surprise pirate attack, the captain discovers a letter and a talisman aboard the conquered vessel. Intrigued by the promise of wealth and power, he and his crew set out on a journey of exploration. They had no idea how many enemies they would make along the way.

The core of Sea Journey is a match-3 game that fuels battles between yourself and a computer-controlled opponent. Depending on which kind of tiles you match you'll perform different actions in combat, spreading a surprisingly intricate game of strategy before your eyes. An offensive tactic is to match cannon balls to signal your ship to fire, dealing direct damage to your foe. You can also play a defensive game and match wheels to pull your ship away from the enemy, causing most of his attacks to miss. Your enemy has the same abilities, however, so not only do you have to think about acting upon your opponent, but sometimes you'll make a move just to prevent him from acting upon you. Enthralling!

Between battles you have the opportunity to visit friendly islands where you can upgrade your ship's stats, buy better vessels, and change which type of ship you take into battle. Ranging from the attack-oriented Corsair to the mysterious Spectre, each boat has a different array of spells to use in battle. Spells are fueled by red, green and blue gems you match during battle, allowing you to save up and do some extraordinary things to the playing field and your hapless opponent. They also add yet another layer of combat strategy and force you to re-think every match you make on the grid. Do you save up blue gems for a spell, grab a few coins or experience scrolls for later, or just unleash the fury of the seven seas on the enemy and pick up the pieces later? 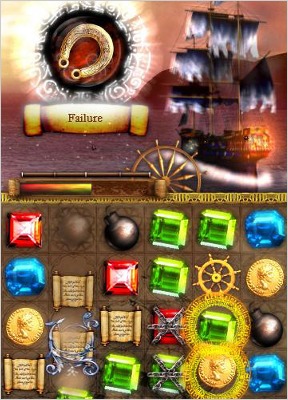 Analysis: Once I saw the remarkably Puzzle Quest-like mechanic sitting at the core of Sea Journey, I had no choice but to play. Unfortunately this happened late one night, and I ended up tile swapping into the wee hours of the morning. It had me hooked from the start, and I didn't quit playing until I saw the journey through to the end. Well, I got some sleep, but, you know, after that, I didn't quit playing.

Sea Journey isn't just a Puzzle Quest clone. Sure, it borrows the same basic idea, but the game doesn't try to follow in the match-3/RPG granddaddy's footsteps too closely. The biggest differentiator is actually one small change in the mechanics. Instead of taking the battle one tile swap at a time, both you and your opponent have three moves each turn. The usual rules of "match four get a free move" still apply, but having multiple swaps per round adds something important to the game: strategy. Yes, now you can set up moves, move gems around and hack away at rows and columns with a goal in mind. There's much less random luck in Sea Journey and much more careful planning.

You'll get a good three to four hours out of Sea Journey before you reach the end, not nearly as much content or replay value as Puzzle Quest, but it's great while it lasts. Unfortunately most of the upgrades and talismans can be obtained during the first 1/4 of the game, leaving the last 3/4 feeling a bit empty and artificially lengthened. Another low point are the atrocious mini-games. From time to time you'll have to solve a simple memory game, click flying green icons while avoiding red ones, and play "where's the symbol?" with groups of shifting circles. I can see what Divo Games was trying to accomplish with these diversions, but they're so lackluster it's barely even worth the effort. The background scenery is really nice, though!

I'd also like to take a moment to point out the music in Sea Journey. The variety of tracks isn't large, but the music you're treated to while solving puzzles is nothing short of epic. Seriously, if I ever become a pirate, that song is going to play on my ship all day and all night, right up to the point when the mutiny happens and my former crew smashes the speakers. Kudos to the composer!

Sea Journey is great. There, I said it. I enjoyed it from beginning to end in all its epic Puzzle Quest piratey goodness. And so will you!

You rob me of my weekend...

I enjoyed it too and you are right, the music was good. The text could have done with a bit more attention as some of the translations are a bit dodgy.

The demo was addictive.

stuck in the cave. any pointers on how to beat the last ship?

Jen: I'm assuming you mean the last boss? Read on...

There really isn't a trick to doing it, you just have to pay attention and click fast. Hover your mouse near the center of the bar between two squares. When the icons appear, click on the cannon balls as fast as you can. The shield power works in a pinch, but I focused on dealing damage, especially with the fire cannons.

I'm at the point where I have to use my mouse to click on a row of six buttons in order to defeat the ship on my right. My mouse just isn't quick enough to allow me to get past this part of the game. Is this the last one or is there more past this battle? Thanks