Scurvy Scallywags is a hybrid match-3 puzzle game created by Beep Games, that studio where that guy Ron Gilbert works, not to mention his DeathSpank collaborator Clayton Kauzlaric. Scurvy Scallywags dresses you in your piratey best and sends you to the sea on a quest to discover the ultimate sea shanty (a.k.a. "song"). Along the way you'll defeat all sorts of foes, swap and match piles of gold, attach swords, coconuts and rats, spend your pirate booty on ability upgrades, and witness one of the most awkward pirate dramas ever performed. 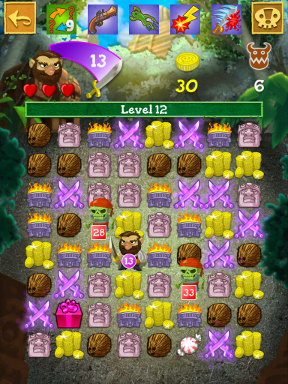 Your journey takes you across the seas and onto islands where you'll hopefully loot some valuable stuff. Entering a puzzle round places your movable pirate character on a grid surrounded by different types of tiles. Tap and slide to swap tiles to make matches, with replacement tiles sliding in to fill in the empty spaces created. Match sword tiles to increase your pirate's attack power, which will come into play as soon as an enemy appears. Oh, there's one there already? Two, in fact? Yeah, better get to matching.

You play a rather exciting game of cat and mouse whenever an enemy drops on screen, keeping your distance if your attack is lower than the foe's but charging over via creative tile swaps once you're ready to call in the win. Your pirate moves just like any other tile, making traversing distances a bit of a challenge. It also makes fleeing from stronger enemies an actual thing, which probably wasn't what you expected from a pirate-themed matching game. 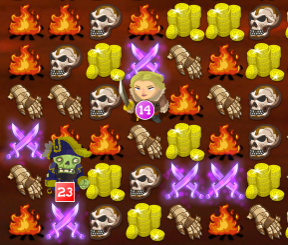 Skills play a big part in the Scurvy Scallywags experience, and as the levels go by they're pretty much the only thing standing between you and an untimely visit to that Jones guy's locker. You can equip as many as five skills at a time, each one unleashable during puzzle rounds with a quick tap. They range from free moves to escape danger to a blunderbuss that lets you shoot foes at a distance. There are even passive skills that bump up your attack or gold finding abilities. Spend your upgrade money wisely, as they really do play a key role in your survival later in the game. Don't say we didn't warn you. *ominous stare*

Analysis: Here's our bold statement of the day: Scurvy Scallywags is what every puzzle game secretly wants to be like. It's instantly entertaining thanks to the fantastic sense of humor and writing. Gameplay can be learned in all of four seconds, though the finer nuances of controlling the board take some time to master. There are plenty of long-term goals to keep in mind, keeping you hooked beyond quick rounds on the train. And, well, there's fun stuff to unlock and collect. Everybody loves that!

Beyond the puzzle game, Scurvy Scallywags features a healthy battery of upgrades, including new clothing items and ship refits that increase some of your pirate's stats. You even gain levels as you complete stages and have skill points to assign. There's not much strategy to boosting stats (uh, more attack power, please!), but it still adds a nice feeling of progression. Every single item you match goes into your junk inventory to be sold later, which makes even the most rudimentary of actions feel like it has more meaning.