ScrumbleShip is an in-progress sandbox-style game of ship construction and combat simulation, all accomplished using a massive list of building materials and a surprisingly smart heat simulation model. Built around simple block placements, you have complete freedom of movement in this game, allowing you to jet yourself in any direction so you can construct the most accurate (or most hilariously inaccurate) piece of space-faring machinery you've ever seen. Want a tiny escape pod all your own? Done. How about a massive star base? Orbital station? Or maybe even a Death Sta— er, moon?! 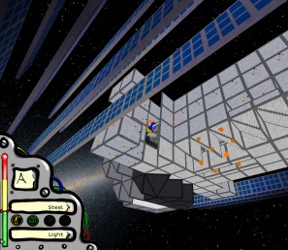 It'd be easy to say ScrumbleShip is Minecraft in space, but that's a horribly truncated statement that doesn't begin to capture the essence of ScrumbleShip. Sure, you have blocks and you get to build things, but instead of focusing on mining or crafting or biomes, you're floating in space with an absolute arsenal of materials to work with. A short tutorial clues you in on the basics of the game, teaching you how to move, how to place blocks, and how to read the game's heat- and suit-specific dials. Apart from that, the universe is yours to create!

When it comes to construction materials and solid objects, ScrumbleShip doesn't hold back. There are over 60 components to build with (blocks and interactive elements to place) and a palette of around 40 materials to choose from. There are parts for life support, ship propulsion, energy production, ship control, and the all-important storage of lasguns, not to mention purely visual construction pieces. Just about everything in the game can be placed using the long list of material types, from practical things like steel or plastic to crazy stuff like water, flesh, and... butter. Materials aren't just decorative choices, either, and as the game's heat dispersion becomes more and more integral, you'll have to think twice about that butter hull you were so eager to construct. 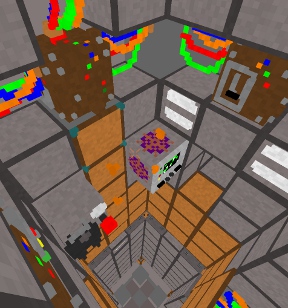 Analysis: Creativity in action! In space! ScrumbleShip represents the next grand step for sandbox-style games: functionality. Instead of building things "just because you can", you get to build things because you want to see interact with the world. Imagine constructing your own space station, stocking it with your own design of combat ships, and using them to protect your very own solar system, all in real-time multiplayer bliss. That's where the ScrumbleShip roadmap leads, and it's showing all the signs of getting there with style and perfection.

Apart from a slight learning curve (which is to be expected), the only downside to ScrumbleShip is that it's still in alpha. A large number of the most exciting features are still in the works, so for the time being, you're mostly confined to building your own ship and testing out the various components and heat-resistant materials. A free demo is available that gives you this functionality, but you can pre-order for access to the latest builds as well as some of those new features as they're released.

ScrumbleShip is a very exciting idea, and even though it's still in the early stages, there's a lot to love. It's already building a great community that's both active and creative, crafting ships and mods you can download from the official site. As ScrumbleShip grows in size and features, the creative possibilities expand exponentially. Get in now so you can watch this superb sandbox game grow to be one of the most accurate space sims ever!

Excellent article, John! Well-written, and as a long-time fan of ScrumbleShip, I can say with authority that you really captured what it's all about. :)

"Build[ing] things because you want to see them interact with the world" is really the core of the game, for me. It's why I build big, strong, and (hopefully) efficient. I can't wait to things like mining, flight simulation, AI crew, and combat are in place - that's when we'll see if our designs catapult us to victory, or that we need to go back to the drawing board.

Just a heads up - ScrumbleShip now has its own Kickstarter campaign! You can pledge to help Dirkson make the game even better, and get some rewards.