Scribblenauts Unlimited is a new and improved release in the Scribblenauts line from 5th Cell Media. Giving you the power to create objects at will, you embark on a quest to bring happiness to the world, helping people in need by granting them objects from your magic notebook. That's all fine and good and such, but the fact of the matter is you can create just about anything you want, so while that pedestrian is in dire need of a glass of water, wouldn't it be so much more fun to give her a gigantic angry flying shark instead? 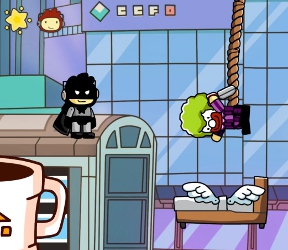 Maxwell and his sister Lily have a great little life. Their parents were adventurers who made Indiana Jones look like a desk jockey, but after they retired they settled down to have a few (dozen) kids. Among their treasures was a notebook that would create anything its user wrote inside. For some reason they thought it would be a good idea to give it to Maxwell, and of course he went out and messed with a poor beggar who immediately cast a spell on Lily, slowly turning her to stone. In order to break the curse, Maxwell must seek out starites, little star-like things that are produced anytime someone is extremely happy. Time to whip out the cute kitten pictures!

Even though Scribblenauts Unlimited is billed as a redemption quest, it's still the same old Scribblenauts we love, with some fantastic added extras. The traditional map-based level system has been replaced with a more world-based method, allowing you to travel around town and countryside helping random folks on the street. The new starite vision lets you check out people in need, and once you're ready for a more frantic challenge, you can head into the game's numerous sub-areas where you'll have fast-draw problems waiting to be conquered! 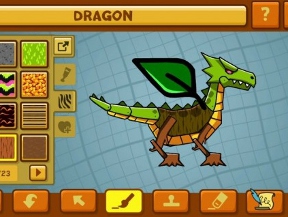 Analysis: Structurally more organic and featuring every parser improvement from Scribblenauts Remix, Scribblenauts Unlimited is bigger and better than its predecessors in every way. It sports the tagline "Create anything. Edit everything.", not so subtly hinting at its biggest and bestest new feature: the object editor. With this fancy piece of software you can customize and craft anything that comes to mind, altering both the visual appearances and rule set for every object. Ever wanted to take a toaster, paint it green, and attach a giant brownie to the side? Do it! Want to make said toaster become angry when it sees an invisible sleeping bat? Do that, too! 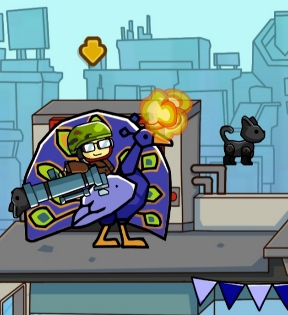 Coming from the other Scribblenauts games, it's kind of difficult getting used to the new mapless level system. It offers a great many new challenges both large and small, but something about the one puzzle per stage setup worked really well for the series. Starite vision is a bit clumsy, and the puzzles it presents are usually super easy to complete, so the advantages an exploration-based level system could have had feel sacrificed for the sake of making the game friendlier for a younger audience.

Scribblenauts Unlimited is a logical progression for the series, introducing the ability to actually edit in-game objects as well as increasing the puzzles and challenges before you. It's not as organized or even as challenging as previous releases, but to have that magic notebook in your hands once again is a great feeling!

My big complaint about the game is that he puzzles are essentially mad libs. "Make something that makes noise" "made a red thing" etc.
What interested me in the serious was "here is a situation, make objects to solve it". That is almost completely gone. The most puzzle it actually gets is basically posing a riddle.
Being able to create anything is really awesome, but the actually missions don't utilize that anymore.

Awesome, I've been waiting for this thing.

Hey, just thought I'd let you know, Steam is saying its not available in my region (UK). Don't know if you wanted to mention it before too many people get too excited.

I ordered this game on amazon for my 3DS, but it won't get here untill the 19th! I knew I should have pre-ordered it when I had the chance. DX

Yay! it came early! I'm so happy! I love the Scribblenauts seires. :D