Nintendo DS owners most likely recognize the name, but for everyone else, the Scribblenauts series is a relatively unknown treasure. That all changes with the release of Scribblenauts Remix, an iOS version of the phenomenal creativity puzzle game from 5th Cell. The tagline "Write anything. Solve Everything." couldn't be more appropriate, as Scribblenauts challenges you to solve puzzles by typing in words and phrases. If you can imagine it, you can probably do it, so feel free to summon a huge invincible flying pregnant angry rainbow giraffe to fight with Zeus, if you like. 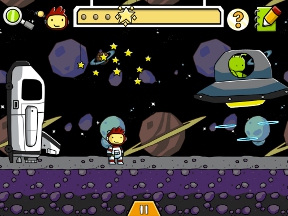 Scribblenauts Remix puts you in control of Maxwell, a happy little chap wearing a chicken with headphones hat, who works his way through a few dozen levels collecting starites. In each stage you must create objects by tapping on the pencil and paper icon at the top of the screen. Open the keyboard, type in a noun, modified with adjectives if necessary, then hit enter to create the item. You can then tap to use the item in any logical way, such as riding in vehicles, equipping objects, wearing items of clothing, attaching ropes and chains to things, and so on. Once the freedom of creation sets in, you'll suddenly become wide-eyed at the possibilities that lay before you!

The stages in Scribblenauts Remix vary in difficulty and are split between puzzle and adventure types. In puzzle levels, you are presented with a simple problem that can be solved by summoning the correct objects. Giving the right items to different people, for example, or creating something that will help a character accomplish a task. Adventure levels are usually more difficult and challenge you to obtain a starite by any means necessary. If that happens to involve summoning a helicopter, attaching a rope to it, and dragging a bulldozer across a lake infested with sharks, well, then that's just what will have to happen! 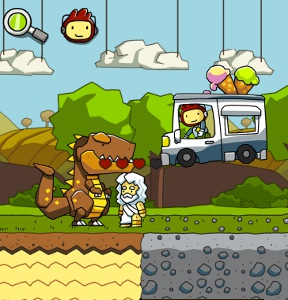 Analysis: Scribblenauts is a remarkable creation that aims to fulfill what everyone has always dreamed of in a video game: complete freedom. Most games offer up a few puzzles along with a few items to solve those puzzles with, the most logical solutions usually presenting themselves by deduction. In Scribblenauts, however, you are (almost) literally limited only by your imagination, so when the game says "get the starite down from the tree", you can accomplish this however you see fit. Maybe bacon, ceiling cat, and a pink cthulhu can help?

If you're familiar with the Scribblenauts games for DS, you'll recognize most of the content in Scribblenauts Remix. The iOS version contains levels culled from both DS games as well as a few new additions exclusive to the platform. The basic mechanics are the same, and the objects list doesn't seem to have been messed with, though a few seem to have been changed in function (the teleporter, for example). Also, some of the bonus sandbox levels seem to be missing, which is a bit of a shame but not a huge loss.

One oversight in Scribblenauts Remix is failing to feature a left versus right handed layout. The DS releases allowed players to swap preferences from the option menu, but the iOS version features the typing icon only on the right side of the screen, something left handed players (especially those who are using the iPad version) will have to adapt to.

Scribblenauts Remix is an excellent fit for iOS devices, and it's great seeing the visuals looking so crisp on the iPad's large screen. And because Remix doesn't steal everything from both DS releases, you can look forward to much more item-creating fun by seeking out those games as well!

As an Android user, I wish I could play this. Alas.

Been playing this for a few days now, quite enjoying it, but apparently I'm not creative enough to come up with cool stuff.

I made a Gargantuan Living Angry Violent Sword that proceeded to fly around the screen and kill things of it's own accord. That was fun :)

Just played the DS version for the first time the last weekend and I liked it a lot. Gets a bit repetitive though, but fun none the less. It really let's you create unbelievable amounts of stuff.

My favorite items were probably gallows and electric chair, just because it's a "kids game" and it let me create them. I had fun too in a level where you had to give x-mas gifts to children and one of them was naughty. I tried to think what would be the worst gift ever and ended up playing "dead bird". Game accepted it and I giggled like a little kid.

At the x-mas level I gave the naughty kid socks, I laughed at that.

I've been pretty obsessed with this for the last few days. The adjectives recognized are just crazy. I like TEMPORARY, which causes something to just disappear after a little while. HYDROPHILIC RUBIDIUM tends to get itself into trouble when there's a water source nearby. I also like watching a GRANDFATHER chase a GERONTOPHOBIC BABY. The game claims not to recognize proper nouns, but plenty show up. GEORGE WASHINGTON behaves as you might expect when you give him an axe and a cherry tree, but ABRAHAM LINCOLN doesn't have any adverse reaction to actors. Throwing a FATAL LEMON is usually how I attack enemies, and if you haven't made a PREGNANT TOASTER OVEN yet then I don't know why you even bought this game.

More physical levels would be great, as would more interactions in the context-y levels. The game recognized that a car without a license plate was breaking a law, but tying a refrigerator to the roof didn't set off any alarms. Even when I filled it with corpses. But I'm delighted that it let me do that! Likewise in the bank level, it knows what a periscope is, but doesn't see how such a thing would be useful in a heist.

It's interesting where the "childproof" boundaries are in this game. Drugs and tobacco are verboten (making the aforementioned break-a-law challenge trickier), as is anything vaguely sexual. There's a funny set of antiterrorism bits in place too: a PRESIDENT is automatically immortal, and the EXPLODING adjective (which can be a lot of fun on the right object) automatically gets stripped from any vehicle.

I'm stupid. I can't get past level 1-10. I kill the eel with electricity and I can get Maxwell on the boat but the knight always falls off into the water and drowns.

1-10 just give the knight a jetpack

You have got to try ceiling doppelganger. He just keeps making different things. It's really funny and totally crazy.

Is this possible?
YES! Now I can (shove) use Scribblenauts with two consoles!

"Your mom" produced a giggle from me, as did making a pregnant man and pregnant toast. The latter two freak out when a tiny version of themselves pops onto the screen. :)

Can I change background somehow? (at my own world, not level)

I made a 'super ray' and shot a flying bathtub and a starite came that i could hold.

Try putting an Arachnophobic spider in front of a mirror! it works haha

Winged potato. Nuffield said. Haha you can make any thing fly in this game, it's great.

How do you beat world 3 level 10? We have done every level and worlds up to 5, but cannot get blind guy across last part....ugh help for ipad

i am stuck on world 4 - 3. find a reason for specialist to see prisoners. i got them all but psychologist. a psych. can calm a panicked prisoner. omg been stuck for three weeks. can any one help ?? please

Ok. For level 4-3, type in snake in the notepad and drag it to the top left prisoner cell. the cell wall will lift up, and the psych will go over to calm the prisoner. I hope this works!

if you type in jeremiah slaczka (the creator of the game) and click on him he does a cool move!

if you spawn medusa and put her infront of a mirror she will turn to stone!

Haha! It appears not ALL sexual references are removed! Try creating a BIRTHDAY SUIT it almost works!

My favorite was doing battle with an evil telekinetic raisin.

If you create an asteroid, you can destroy the world. It's actually pretty fun! You can also use atom bombs too! :)

There are lots of ways to destroy the world like

let me know if there's more

My favourite is a gentlemanly Haetae or a normal haetae. I've got a list of things you should try:

A harmless Cthulhu (if it's not harmless you can't ride it, you could make it a friendly instead)

Another way to blow up the work is a nuclear missile

Be warned though the potato may steal your bazooka

if you make a gentlemanly top hat, you can wear it!

I'd play this if it was online, I really think I'd like it because I own both the orignal scribblenauts and super scribblenanuts.

Has anyone tried maxwell's notebook? Try it!