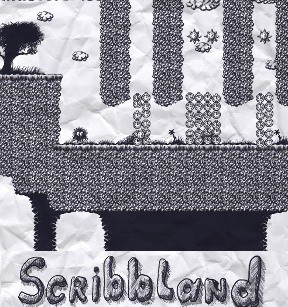 In a sketchy, notepad world, a doodled character moves with ninja-like precision over the landscape and deadly terrain. Under birds, over spikes, avoiding pitfalls and collecting floating clocks en route to the exit is a lot more difficult than it seems in this one-button platformer.

Yes, the hero of Scribbland is in for a rough time as he traverses the obstacle laden courses ahead of him, specifically because all of his movements are controlled by using just the right-mouse-click button on its own. The interesting controls work like this: Holding down the mouse button moves the character to the right. Releasing the button causes the character to jump. If the button is pressed again before landing, the character moves through the air with the grace of a leaping gazelle.

Although the controls are fairly confusing on paper, in action they work rather well and boil down to jumping at the right time while running at the appropriate times. The design of the levels is also kept quite simple. Each of the twenty levels is a single-screen in length and you will only see four enemies; spikes, bouncy balls, birds and big holes in the ground. It's worth noting at this point that spikes are not dangerous if you walk horizontally into them, only if you drop on top of them, which... kinda makes sense when you think about it. The combination of the enemies and the precision you will develop when learning how to avoid them is constantly refreshing and always offers a new obstacle. 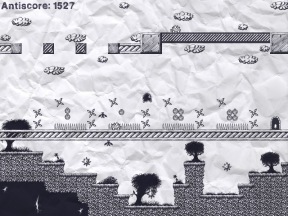 Analysis: The biggest challenge in the game is teaching yourself how to use the controls. As a standard platformer, the game would be easily completable within a short amount of time. However with the limitation imposed upon you, the difficulty increases as you learn to manage with what you have been given - a single mouse button which controls every move you make.

To increase the play time, the game can also be played on Hard Mode which is identical to the Easy Mode, except that running into walls kills you instantly (as dangerous as an enemy) and certain levels contain extra birds or spikes. The extra challenge is a welcome way to continue to flex the new movement and understanding of the interesting mechanic the game is designed with, as the levels are familiar, but the precision and split-second timing involved is far more advanced. Scribbland is about as accessible as you can get with its easy to pick up, but hard to master gameplay. While you can breeze through the game quite quickly, doing so with a high score is another matter entirely. As an experimental concept with a clever design, Scribbland is worth a look.

So, let me get this straight: I'm tasked with playing a platformer which, at times, requires precise control only I don't have those precise controls to begin with.

Talk about an exercise in frustration.

Neat! It reminds me of a stripped-down Megaman. The scoring is non-elegant, though--it took me a few levels to figure out whether I was supposed to be collecting or avoiding clocks.

I don't really like a precise-timing platformer at the best of times. The complicated one-button control doesn't save it.

Points for trying something different.

i can't get very far though

Having played the game that gave origin to this (Happy Runner, which was featured here a while ago, by the way), this version was a piece of cake, but fun anyway. I do miss the retro-style, though.

Level 20 is impossible. Past that, the game was fun.

Well, this is interesting. Takes some getting used to, but fun.

The main thing that makes this difficult is that you are essentially forced to jump every time you stop running. This makes timing a jump (over a moving obstacle) very very hard.

Unfortunatly, it didn't hold my attention for long. It's hard to get me hooked on a game, it has to be fun and addicting, and this was neither. Nice try, though.

I'm usually pretty bored by platformers, but this was a little challenging, if nothing else. They really shouldn't have gone with those pencil graphics though; It was an eyesore to play. There weren't enough levels. Getting a good score in Level 19 on hard mode is a pain. Interesting concept, but you die much to often. And am I crazy for having level 20 on Hard as my favorite level?

@capyash:
You can walk through the spikes (just don't fall on them).

I thought it was sub-par.
Even though the developer should be applauded for such a simple control scheme, it sort of falls flat on its face. I think it would work better in reverse, constantly running, and clicking to jump. Even though this might make it more difficult in a different way, it would at least make jumping more fluid and intuitive.

A non input game would ALMOST be as bad/fun.