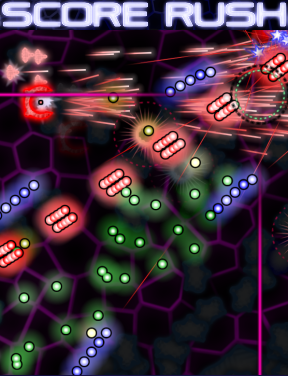 What do you get if you cross a rainbow with an overhead shooter? Now we know... it's Score Rush, bursting through your monitor in a glorious avalanche of colour and sound. Xona Games describe their game as a retro 'shmup', but a better name for the genre, at least based on this evidence, would be 'Bullet Candy'.

As is customary for overhead shooters on the PC, you navigate with the [WASD] keys, and aim and fire with the mouse. Eight bosses, plus minions, are out to destroy your little spaceship... or maybe you're out to destroy them. Either way, your sole aim is to blaze a path through the lot, using only your gun, 3 lives, and a limited selection of screen clearing bombs. Power-ups regularly appear to add to the torrent of bullets you can fire, and once maxed out, subsequent pickups trigger a small shockwave that clears bullets around you, giving you a much needed moment of respite. But that description doesn't do justice to the colorful assault on the senses that defines Score Rush. As the action intensifies, it feels more like a playable light show, accompanied by a fittingly guitar-heavy sound track, although you get barely a split second to take it all in before brightly coloured bullets begin raining down at you.

Score Rush requires registration before you can play, which may seem like an unnecessary frustration. It's also missing a preloader, so expect a blank screen here and there before the game starts. But it's a free port of a game that costs real money on the Xbox, and it's worth playing for the sights and sounds if nothing else. Shooter fans will find that behind the dazzling spectacle of the graphics there's a smooth, solid, and very playable game as well.

Doesn't work under FireFox 12.0--gets through all the loading screens, the music starts up, gets through and logo splashpages until I see the game's logo, then it just sits there unresponsively. :-(

"Requires registration before you can play?" Unnecessary indeed. If it were an ever-growing MMORPG or something, I could see needing to register to play. But just a shooter? C'mon, that's just ridiculous. I'd be happy if there were just a stripped-down "crippled" version of the full game that you could play without registering just so you could see what it was like. Then if I did enjoy it, I could register and play the full game.

I use firefox 12 and it did offer you fair and square to download their engine or switch to chrome .. I switched to chrome and it worked fine.

As far as I could see it was a beta site and registration was painless.. far less painful than the heavy handed draconian tactics of Nitrome (who suck)

Does anyone else remember that game where you move around and shoot backwards only? There was also a bubble tank.

I've been looking for it but i can't remember it.

I'm the lead programmer of Score Rush. The registration is not for the game, it's for the social gaming platform that it is running within -- Turbulenz. It has to know your name -- who you are -- so you get all of the social benefits: the 30 leaderboards, 30 badges (achievements), friends lists, who's online, chatting, notifications of what friends are doing, etc. And you can log in with a single click via Facebook if you like, and it doesn't spam your wall or anything silly like that -- it's for convenience. Both Turbulenz and Score Rush are in beta. Give some of the badges a try, and I'm betting you'll enjoy it.

4,384 Views
7 Comments
chrpa— Jayisgames needs your help to continue providing quality content. Click for details We escapists got our first Christmas present, a new game from Masa - and it's great! You find yourself in front of an elevator, which you'll get...  ...