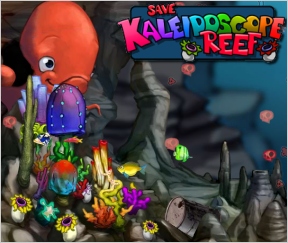 Save Kaleidoscope Reef, from the team that brought us Anika's Odyssey, is a new arcade game with an environmentally friendly message embedded beneath its gorgeous exterior. A tropical reef thriving with aquatic life is in danger of being destroyed by pollution. Rebuild the underwater sanctuary one screen at a time by grabbing floating polyps, placing them on rocks, and feeding them until they bloom into lush coral.

After a ship destroys a section of reef, a group of friendly fish decide to help it recover. The narrative in Save Kaleidoscope Reef is simple but charming and is told via wordless cutscenes between each stage. As the coral begins to fill the stones, fish will start swimming by, later joined by other grinning creatures of the sea. Once you've grown enough coral to fill the meter to the left, our fish friends return and set up the next scene.

But all life is not friendly under the sea. The plankton you grab and feed to the polyps is food for other critters too, and some want to take more than their fair share. Grumpy fish will appear from time to time, ready to chow down. A simple click sends them away. Later levels present you with bubbling toxic waste and other baddies that must similarly be disposed of.

It's a simple game idea, and Save Kaleidoscope Reef doesn't stray too far from the formula outlined above. Because of this, however, the game dips into the realm of tedium in later levels, and despite the amazing artwork and charming message, you won't be as motivated to play as you were when you first started. Regardless, it's an experience well worth, ahem, diving into.

Perhaps I am being foolish, but the fourth level (with the anchor) seems to be impossible - there are blue plankton, but only orange, red and yellow polyps....I'm sure I'm missing something here but I'll admit to being baffled.

You put the blue plankton into the orange flame thing that is at the bottom left corner...

If level 6 is the one with the sunken ship onscreen,

You do not need to kill the boss. (which is fortunate, because you can't.) Just keep dragging and feeding polyps and get rid of the parrotfish (with the beak) ASAP because they can destroy coral. Also clean up the oil when you can so it doesn't build up and block you. Just be patient and you'll get it.

Basic tips for any level:
Colors

Generally, the color of the polyp indicates what protein it needs, based on the color wheel/rainbow. Only the pale lavender polyps can consume all three colors.

To get several of the plankton at once, click a plankton and hold down the button. Any other plankton you roll your mouse over will follow your cursor as well.

Drag as many polyps as you can onto the rock and be sure to group your polyps by color so that you have a bunch together that need the same plankton. Then gather a bunch of only that color and drag it over. This will prevent damaging different-color polyps and goes a long way toward completing the level.

The lesser greedy fish you can ignore somewhat, especially in the early levels when food is plentiful and they don't go after anything but plankton. Click on them when they start to annoy you, but don't too far go out of your way for them.

Squid will go after the flying polyps as they float around. They're annoying, but easy to get rid of.

The whales can suck up a lot (if not all) of your plankton. You can drag poison to their open mouths, but it's easier to just spam-click on them.

Make sure to get rid of the parrotfish (with the beak) right away, because they can eat your grown coral and will usually continue to do so until stopped.

Fun until the processor won't slide faster than the different enemy elements which slows down the processor...

Thanks for the review! I really liked that game. Its pretty nice in the name of "casual".

Fantastic game - but then i am a sucker for smiling puffer fish!

Any tips for the level with the whale? Seems like the only way to get plankton is to click on the clams, which then spit out plankton at a high speed. And the whale is just getting on my nerves. :[

WOW, power of the post. Don't I feel silly.

If anyone else has trouble with that one,

Instead of trying to click the clams then catch the plankton, position the polyps so the correct color plankton will just float up to them.

best place the polyps first where the plankton will go to...

I like this game. The lion fish is funny.

I am so confused be the level with the anchor. All I'm getting are a bunch of blue proteins, and red orange and yellow polyps. That way I can't do anything! Help?

Drag the blue plankton to the orange opening in the lower left corner. Yellow ones will float out the top.

Aw, this was very pleasing and pretty. Wish it had been longer though.

I really liked the game but when it has too many moving things on the screen, it lags really bad :(

I can't even discover how to play.
I'm in the first level, and I can't figure out the way to feed my unic plant.
Help please!

There are some good basic instructions posted on this page by Jen on September 18. Try checking them to see if it helps you get started.

this game was sweet!
they shoulda made it longer though

Yo, here's the solution for level 4:

Just because it's called aquarium mode doesn't mean it doesn't have enemies. Expect all enemies to be there except for the blob-boss himself.

to get rid of the whale just drag him out

i dont know how to pass the one with the really big fish.