Savant: Ascent is the most fun you can have for two dollars. It might even be the most fun I've had in any sort of arcade shooter in a long, long time. From D-Pad Studio (the creators of the hotly anticipated Owl Boy) and talented musical maestro SAVANT (Aleksander Vinter) comes a game that's both visually and aurally stunning and hard as b... nuts. Cast out of his tower by a magical reaction, a wizard must battle his way back to the top and collect funky beats along the way to unlock new abilities. Simple and challenging, yet oh so addictive, Savant: Ascent is what more arcade games should be. (Mac, Linux, iOS and Android versions are on the way!) 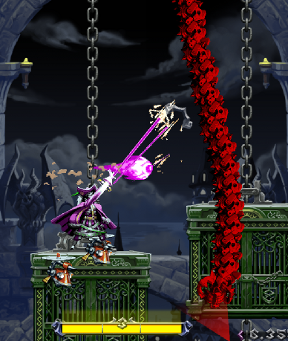 Use the mouse to aim and shoot, holding down the left mouse button to fire, and [A] and [D] to bounce between the two places you can stand in each stage, hitting [W] to jump. Enemies will begin to flood the screen, and it's your job to blast them all, dodging and jumping between the two standing points on each stage. Get hit three times and it's game over, and you'll have to start from the beginning of the last stage the next time you play. Tricky? You bet, since you're outnumbered if not outgunned, and more enemies and enemy types will soon begin to appear. But gather four golden disc pieces (place your cursor over them and hit the [spacebar]) and you'll unlock not only a new music track to play alongside, but new abilities too. Charge and unleash powerful attacks, blast five things at once, and more, but above all else... stay on your toes! (Note that if you close the game, the next time you play all your abilities will still be unlocked, but you'll have to start from stage one.)

For a game made in just five weeks, Savant: Ascent is almost criminally enjoyable. It's fast-paced addictive fun, thanks in no small part to its relentlessly catchy and danceable soundtrack, and the sort of thing that would have left your wallet weak and depleted on the arcade floor years ago. With just a few unlockable abilities, the emphasis is more on skill and reflex than grinding away for upgrades, making for breakneck action. The way the enemy movement changes based on your chosen soundtrack is a lovely touch, On the downside, being unable to see the whole screen at once means it's easy, even with the onscreen warning, to get swarmed, and the complete lack of health drops means one wrong move can force you to restart an entire stage you were only barely about to squeak through.

It's easy for gamer entitlement to rear its head in cases like this, however, and some may find themselves falling into the trap of complaining that it's "only" a simple arcade game and "not worth" two dollars. Don't. Savant: Ascent is "only" pure entertainment, a lovingly crafting homage to shooter classics with a gorgeous design, and a professional look and feel. It's more than worth a few dollars, and trust me when I say you'll get a lot of value for your money.

To defeat the last boss (Vario):

You have to attack the broken orb with power shots. Vario is invulnerable; shooting the cubes doesn't damage the boss but increases your energy.

I'll tell you right now, I was one of those people who though it wouldn't be worth 2 dollars (mainly because I suck at the type of game Ascent is) I only go it because I saw that it had some awesome music (never heard of Savant before) and I had some trading cards lying around needing to be sold.

I will say this about this game, it is quite possibly the best 2 dollars I have ever spent, I can see me loosing myself in the game for quite a while, and considering that I just finished playing it for 3 hours strait, I have no doubt that it will be a great time.

Buy this, it's great, fun, and once you beat it you can ride the elevator forever in Endless Mode, now if you don't mind, I've spent way too much time here, see you at the top!