Sarah Maribu and
the Lost World

Strange, uncharted jungle islands, where would hidden object/adventure hybrids be without them? Short of stories, is where. So yet another mysterious island in the pacific is the setting for the new hybrid, Sarah Maribu and the Lost World. Created by ERS G-Studio, Sarah Maribu is an adventure to one of those lush, mysterious places.

Our story begins with Sarah and her husband Michael being flown to the aforementioned island by dear Uncle John — who rather resembles Frank, the helicopter pilot from Lost. They are flying to the island on information from Sarah's grandfather, in search of adventure. As they are flying into the teeth of an erupting volcano, it looks like they're going to find it. Once Sarah and Michael set off, trouble soon finds them (doesn't it always?). Before you know it, Michael is kidnapped and Sarah must find her way around an island with strange, hostile natives and lots of dinosaurs. Yep, dinosaurs. Animated, living, breathing dinosaurs. Guess Grandpa was right about that, too.

The bulk of the gameplay is hidden object-oriented, and there's a lot of it about. At the beginning of each scene pictures of the objects to be found appear at the left of the screen, along with a running count of how many objects need to be found. As you're working with pictures rather than lists, only a certain number of the objects are revealed at one time. Some of the items will go into the tool box for use later in opening or manipulating various places in the scene.

A handy changing cursor and the occasional sparkle indicate areas of interest, places that can be investigated more closely, objects that can be manipulated, or mini-games. Most scenes take place in one fixed area, but there are a few where the gamer will have to navigate back and forth between two different locations to find all the items needed to move on. A handy map in-between the hidden object scenes lets the player know where they are on the island, and how much is left to go.

Clicking on an "area of interest" will often get you a clue as to what needs to be done there, and of course there's a refilling hint timer when the hidden objects are a little too well-hidden. Mini-games are on a skip timer as well, wait long enough and you will be able to move on if you have problems solving. There's nothing new in the mini-games, you've probably seen them all before, but they are beautifully presented in some unique ways, such as a basic jumping peg puzzle involving colorful, feathered, flying dinosaurs. 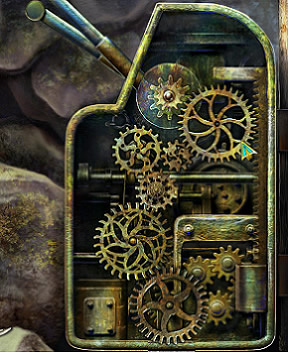 Analysis: ERS G-Studio, creator of games like Murders in the Rue Morgue, and PuppetShow: The Mystery of Joyville, have a reputation for beautiful games, and Sarah Maribu is no exception. The backgrounds are stunningly beautiful, the animated dinosaurs and other creatures are very life-like (or, in the case of the dinosaurs, as life-like as we can guess they looked).

There's really not much of a story in Sarah Maribu. We never find out why Sarah and Michael came to the island in the first place, and most of the game is simply Sarah trying to find Michael. This seems a bit of a let-down considering that Murders and PuppetShow were very story-heavy. The music is also a bit incongruous, short, repetitive loops that have a lot of upbeat calypso rhythms involved. The mini-games, although beautifully presented, are extremely easy as well.

Perhaps we shouldn't compare Sarah Maribu to the other hidden object games produced by ERS, but to one of their contributions to the time management/village sim field, Many Years Ago, which played like both a village sim and a parody of a village sim at the same time. Sarah Maribu and the Lost World also seems to walk that strange line. Despite the obvious flaws there's something seriously enjoyable about playing a hidden object game that is this much goofy fun. Idiot husband (seriously, he gets kidnapped in like the first 5 minutes)? Check. Hostile natives who worship both dinosaurs and statues of Sleestaks (that's the original Land of the Lost, not the odious movie remake)? Check. Uncle John (who looks like Jimmy Buffet after a 3-day bender) being sacrificed to the dinosaurs by the hostile natives? Check. Having to find 20 hidden items before you can find the water that will put out the fire that poor Uncle John is being roasted over? Check. It's all silly, over the top entertainment.

This is not, perhaps, the game for serious adventure enthusiasts. It's more of an hidden object/adventure hybrid light, casual gameplay that the younger set might appreciate (cool dinosaurs!); novices to the genre might find nice as an introduction; and the older generation perhaps appreciating the calm, non-timed and beautiful ride. Who needs a story, anyway, since you're too busy brewing herbal concoctions that will knock out the native guards, feeding helpful dinosaurs to open gates, or rescuing all the idiot menfolk before everyone is caught by the natives, the dinosaurs, or both?

Despite the flaws there's a lot of hidden object fun to be had with Sarah Maribu and the Lost World. Just sit back and enjoy the wild, illogical, yet dazzling adventure through the island of misfit dinosaurs. Just tell them Grandpa sent you.