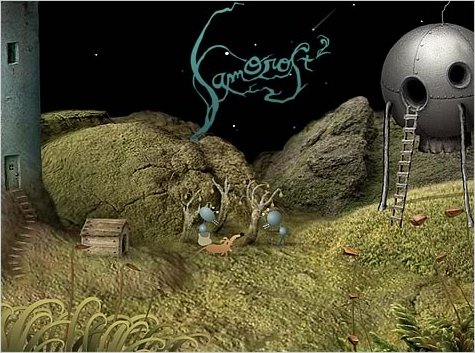 It's finally here, the sequel to the game that proved to me that fantastic, immersive, interactive experiences can be achieved in any browser with Flash. The original Samorost is undeniably one of the greatest casual games ever to have graced the Web.

And now, there are two (2) brand new chapters to play in the Samorost universe! In the first, the main character from the original game—the one you helped save his planet from collision with another—has lost his dog, which was kidnapped by aliens. Your mission is to help him rescue his puppy.

The second chapter you must pay for, and is a way for the game author, Jakub Dvorský of Amanita Design, to reap some reward for the fabulous experiences he has created and that so many have enjoyed. I am most certainly going to support him and purchase the game, and I will be back sometime later this weekend with another update, including a full review of both chapters. In the meantime, drop everything and go play the new Samorost 2 ...do it now. Click.

Update: For anyone who paid for and downloaded the full version, Amanita Design just sent out word that they discovered a bug in the first version and a have made available a repaired version for immediate download. Check your email for the links (for both PC and Mac versions).

The discussion of Samorost 2 has been moved to the Samorost 2 review page.