Sam & Max: The Devil's
Playhouse - The City That
Dares Not Sleep

If you have been following the most recent episodic season of Telltale's licensed heroes Sam & Max, adventure gaming's favorite sociopathic justice-dispensers, you have learned many things. You've learned that aggressively-armed space apes promising gifts of peace are not to be trusted. You've learned that astrally projecting yourself into the past bodies of your deceased relatives should not be undertaken without using the buddy system. You've learned that amateur brain transplants hurt everyone. But if life or finances have kept you from experiencing the latest antics of the anthropomorphic Freelance Police, fear not! Telltale Games has released the season finale of Sam & Max: The Devil's Playhouse titled "The City That Dares Not Sleep," and you can now grab the full season for less than ever before. 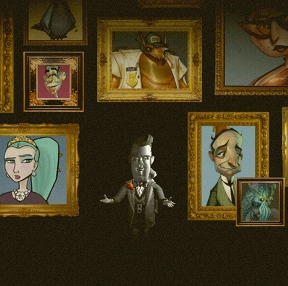 You can read our review of the first episode of The Devil's Playhouse to learn more about Sam & Max, but the basic ingredients are these: Sam is the stable, canine half of the Freelance Police, whom you control for most of the season. Max, his impulsive, naked, rabbity partner, has unaccountably been gifted with the ability to use the Toys of Power, deceptively playful-looking psychic artifacts from beyond the dawn of the universe. There are various other characters who are either recurring from previous seasons or new characters who are after the Toys of Power and Max's special brain for various reasons. Max's newfound powers are the upstart element in Sam & Max's twisted take on traditional adventure gaming, which involves items, interviews, and puzzles, forwarding the trademark wacky mayhem of a typical Sam & Max story.

Controls are essentially mouse-based. Click and drag Sam to move him (or use the [WASD] keys if you prefer), click on the hotspots to acquire things or talk to people (and occasionally things). You can also switch to Max's vantage point, which in most episodes allows you to use his powers (though the powers hardly ever come up in the finale). That's basically all you need to wage a battle of psychic power that is older than time, and maybe score some Fudgy Freezes while you're at it.

Analysis: The story is key to the specialness of The Devil's Playhouse. Previous seasons of Sam & Max have featured episodes which, while loosely connected, were essentially self-contained, so you could have small plots like Sam & Max vs. Abe Lincoln, or Sam & Max Save Christmas, and not have to worry about a larger storyline. Not so with The Devil's Playhouse, where each episode is more like a chapter in a connected story. The big plot is an opportunity to skewer all sorts of fun, cheesy, pulpy tropes of 20th-century popular culture. We've seen alien invasions, mystical archaeology, Lovecraftian horror, occult sorcery, weird science, zombie-like swarms, vampires, mummies, and giant city-crushing monsters; all tied together in a way that, while not exactly sensible ("sensible" being anathema to the Sam & Max milieu), is at least contiguous and clever. While the individual episodes of previous seasons could focus more on comedy and satirizing the episode's theme, this longer-form format lends itself more to a snowballing madcap intensity from episode to episode. 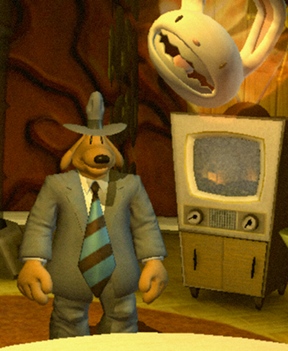 Arguably this makes for a less funny series of games, but the gags are still there, and the sheer escalating weirdness of the story is engrossing in a way entirely its own. Telltale does an excellent job of serving a twist at the end of each episode that sets up the next, and I think this might explain why the finale was a bit of a letdown for me. It's as though the season just kept building and building momentum, and there was no easy way to dissipate it without sputtering just a bit.

Similarly the puzzles from the finale are also a little disappointing. At the start of the season I was concerned how the introduction of Max's powers would affect the tone of the series, but their inclusion was very well done, and the power-based puzzles are some of the most rewarding and clever of the season. For story reasons, however, Max's powers are unavailable in the final episode, and falling back to a more standard adventuring game felt simplistic in comparison.

The finale to The Devil's Playhouse isn't as strong as the rest of the season, but it's not without its up side. There are interesting characters, bizarre sets, some clever uses of astral projection, and more weird plot developments than you can shake a corndog at. Taken as a whole, the Devil's Playhouse is a pretty radical treatment of the Sam & Max franchise. It's hard to call it the best Sam & Max season to date because it is so different from the previous two, but it is decidedly unique and a worthy entry to the Sam & Max oeuvre. Check out the entire season, if only to learn that even giant eldritch monsters and their soporific psychic spores have their good side.

Mac OS X:
Download the demo Get the full season

Have played to the end, this has been the biggest epic stand-alone Telltale episode ever released.
Just remember to play and watch until your game puts you back to the menu.

I found the ending of The City That Dares Not Sleep to be both patronising and very clever. (mild spoiler below)

Everything returned to normal (mostly) by a time travel paradox and a reference to a previous series.

All in all, I enjoyed the finally of the series despite the lack of any real drama (disappointing for a sam and max game) or boss puzzle and its low difficulty. The only things that slowed me down were the red herrings and that non descript building which turned out to be significant. (I found it by pure luck)

Until September 8th, you can buy the whole season for only $20! It's available on their website and Steam.

I just bought the season a couple days ago, and was gonna recommend it today. I'm only on the second episode, but so far it's been great. I would definitely recommend it to anyone who enjoys point-and-clicks.

I love the Sam and Max series :) I've played the other 2 seasons and they are awsome, and funny all the way through. Be sure to try as many combinations of actions as possible to get the entire experience.

Speaking of combinations, I found two different endings, I think I know what the factor is but I don't want to spoil it.

There are two different endings, dependent on...

...whether you answered "crimefighting" or "adventuring" when asked.