Little Giant World is normally known for adorable itty-bitty sim games, so Sacred Heroes, a (still adorable and itty-bitty) realtime strategy defense game is a bit of a surprise. In a world where an evil god has warped his followers into half-man, half-animal monsters to torture the land, you will lead a tribe of people constructing temples to raise the strength of a benevolent god trying to beat back the darkness. Enemies will swarm towards your temple in each stage, and you're given direct control over four different heroes to fight them off while the civilians build and repair. You'll direct your heroes around the battlefield by clicking on them, and then on where you want them to go, and you can even wield a little godlike power yourself by casting spells to aid them against enemies. It sounds simple, but with status effects, upgrades for all, items, special abilities, and more, you'll have your hands full. 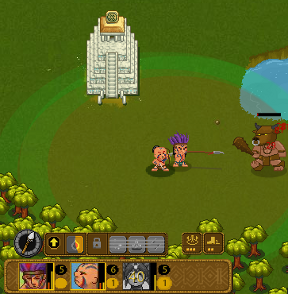 Though it feels a little unwieldy at first, Sacred Heroes is a surprisingly addictive little game despite its rough edges. The main problem is that the game plays very slowly in the beginning, and the tutorial only touches on the bare basics, so you'll either have to experiment or wait for the tool tips to be unlocked as you play. It makes for an experience that unfortunately feels like a slow uphill climb in the beginning, which means some players won't click with it right away, or even at all. The inability to pause the game and issue orders, or change the default speed in any fashion, can mean things get hectic in a hurry when you're trying to cover all sides of attack and upgrade your heroes and drop spells and gather items and gold and trigger combo attacks.

None of that makes Sacred Heroes a bad game, just not quite as accessible or effortlessly enjoyable as it should be, which is a shame because if you've got the patience to learn the ropes, Sacred Heroes is a lot of fun. You can draw the paths of your lightning spells, the piles of upgrades and achievements offer a lot to work with, the status effects and special attacks add depth, and the boss battles add a bit of challenge. Plus, it's adorable as all get-out, with enemies such as Rock Hippo and Thundra Wolf, which, F.Y.I., is going to be the name of the new thrash metal band I just decided to start with my husband when he gets home from work later. Surprise, honey! Sacred Heroes is a game that still feels like it needs some polishing and tweaking, but still offers plenty of charm and challenge for the persistent and the patient.

Great, challenging game! I like how the upgrades are nicely balanced as the difficulty increases - that's hard to do. My only suggestion would be to make the game a little shorter and/or movement speed a little faster. Not sure you need easy/medium/hard for each level - after the first couple levels I was just going directly to hard or med to accumulate upgrade points. I like the idea of the teamwork/combination moves with two players together, but the levels are designed such that towards the end, you aren't placing players next to each other, so that doesn't work well. I'd like to see more emphasis on learning combinations as the only way you can get past levels or situations. Lovely game - looking forward to the sequel. -M

Long, unskippable cutscenes on every level. Massive handholding through an overly complicated system with a poorly-designed UI, and occasional points where you are unable to do anything for unexplained reasons. HAVING TO KILL FURRIES! No thanks, not worth my time.