In Daily Magic Productions' hidden-object adventure Sable Maze: Soul Catcher, twenty years ago people went missing in the little town of Sullivan River, your brother being one of them. You've been having dreams of him "trying to tell you something" (pointing repeatedly at a big sign is actually pretty clear as far as Signs From Beyond go), and on the 20th anniversary of his disappearance, you've come back to town to fix up his memorial, though getting sucked into the Underworld probably wasn't on the itinerary. Either way, you've got nowhere else to go but forward, stumbling through an enormous maze in hopes of reaching the Tree of Life at the center, and hopefully finding your brother along the way. A mysterious but totally trustworthy stranger promises to help you, but an even mysterious-er stranger seems determined to thwart you at every turn. With stunning art design and top-notch production values all around, Sable Maze: Soul Catcher is one comely little adventure through strange lands, though chances are many will find it far too easy. 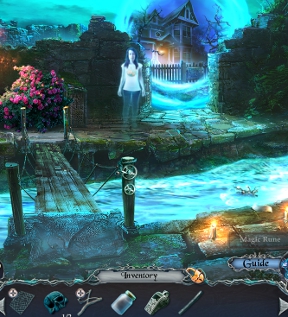 Sable Maze: Soul Catcher might be the prettiest casual game to come down the river of souls in a long time. Its visuals are extremely crisp, the colours are rich and vibrant, and each magical area is full of details to take in. As you bumble your way through the Underworld, you'll help a lot of souls along the way, and, yeah, chances are you'll likely spot the big plot twists before they hit, but it's all executed with such style that it keeps you hooked. While it does deal with some spooky elements, Soul Catcher isn't exactly scary, and in fact you'll be granted a magic rune on your hand that will allow you to banish pesky ghosts. Admittedly, I did snort pretty hard when I discovered you were wandering around the afterlife with a high-tech tablet, but I suppose the days of our hidden-object protagonists wandering around with folksy old notebooks are behind us. Geez, are we already at the point when we can "back in my day..." hidden-object adventure games? I need to go lie down for a while... 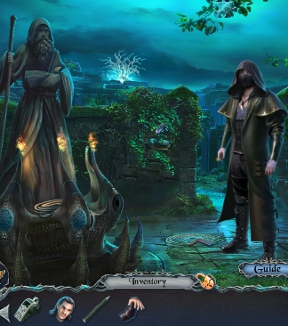 Where Soul Catcher falters is, unfortunately, its puzzles. Familiar puzzle types like scrambled images are used repeatedly, while others feel just sort of plopped in like they were on a checklist in odd locations. The otherworldly locations and concept don't really get integrated into the gameplay as much as they could, so the potential to have some really creative puzzles that make you think and play with the magical setting is underutilized. Why am I repairing gears on an old rope bridge across this glowing magic river instead of, I don't know, conjuring some sort of spirit to help me pass? Why am I looking for fridge magnets in some lady's house to repair a button? Why does she have some sort of bizarre mechanical puzzle just to give me a shard of glass? That's, like, basic Dana Knightstone stuff, not for when you're trapped between worlds by malevolent magic! The hidden-object scenes can be swapped out for match-3 sessions, which is a nice option since they tend to be a little simple. Issues like these are minor, sure, and there's nothing inherently bad about the gameplay, which serves up a satisfying chunk of content... it just could have been a lot more engaging than it is. If you're looking for a gorgeous casual adventure to really relax with, Sable Maze: Soul Catcher is still a great bet. Just try and find a WiFi password for that tablet, because I'm pretty sure the data roaming charges for the Underworld are horrifying.