Run, run, as fast as you can! You can't catch me, I'm A PICKLE. Whatever you are, don't stop running in Runner 2: Future Legend of Rhythm Alien, the next chapter in the BIT.TRIP saga by Gaijin Games. Each level in this rhythm-based platformer is designed to give your fingers and brain a good workout as you dodge every foe with rapid precision, all while soaking in an outlandishly chipper atmosphere. 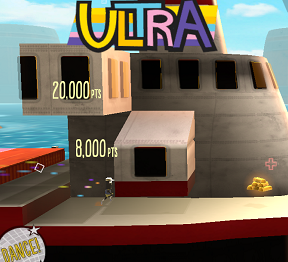 Like other perpetual running games, your goal is to travel from point A to point B while dodging obstacles C through Z (pronounced "zed"). What other running games don't give you is such a huge list of actions to perform en route! Jump over low obstacles, duck under high ones, and do both to squeeze through tight gaps. Use springboards to jump to higher platforms and split pathways. Perform a flying kick to bust through barricades, or block beats with your shield. If you bonk into any obstacle, you fly back to the start, so try to keep up with the rhythm. Above all else, don't forget to dance like there's no tomorrow!

There are plenty of gold bars scattered across the levels to be picked up by your sprightly runner which can unlock extra levels on the map. Collecting all of the gold in a level entitles you to a shot at the bonus target (literally) for a higher level ranking and bonus points. If you can find the alternate pathways in a level (try following the red or blue arrows when you meet a fork in the road), you can unlock hidden treasures and extra levels, as well as new characters and retro Runner minigames! Don't forget to beat the key vault levels which activate the keys on certain levels, allowing you to unlock those less-trodden paths.

Analysis: I should confess at this point that I didn't care too much for Runner2's predecessor, BIT.TRIP RUNNER. The levels that required precise button inputs for the better portion of three minutes straight (again, one misstep sends you allllllll the way back to the beginning, so what should be a short level adds up to a half hour quickly) were too difficult for me to handle. Runner2 generously fixes these issues, not only with the ability to easily switch the difficulty level at the level select screen (you're encouraged to try all three difficulty settings for a Triple Perfect+! ranking), but also with the addition of optional checkpoints mid-level; run through them for a free safe haven for future screw-ups, or jump over them for a huge score bonus, at the risk of flying back to the beginning from a mistake. 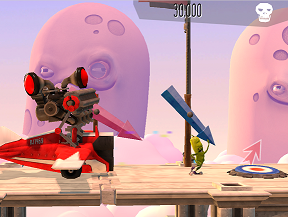 One of the hardest instincts to overcome when playing this game is to perform every action precisely on the beat. Unlike other rhythm games where you've got to stomp on the arrow right when it lines up with the target zone, Runner2 asks you to hit the jump button just before the obstacle you're leaping over and duck just before the low bridge. This slightly awkward syncopation is tricky to get the hang of (and seems to increase in difficulty proportionately to how many years you've been in marching bands), but it can conquered if you remember to play the game with what you're seeing, rather than hearing. If you're still having problems conquering a level, try muting the sound so you're playing by sight alone.

On the other hand, muting the audio deprives you of a fantastic soundtrack that is instantly catchy without being irritating. With each red plus picked up on the run, the background music shifts into a new mode with different instruments and rhythms. Even though much of the soundtrack is a handful of variations on a theme, it doesn't tire quickly, and is intelligently tuned to reflect the current state of play.

Couple the spectacular audio with the whimsical spectacle of a world "at the apex of light and matter" and you get a brilliant world that radiates silliness and rainbows from every inch of highway, quite a step up from the giant-pixel-based graphics of the first Runner game. The vibrant world can sometimes take away from the gameplay experience, such as certain enemies that tend to blend with the background if you don't know to look out for them. If your graphics card isn't up to snuff, you might also experience some jerkiness, which makes timing precise actions trickier than they need to be (I found that switching to a windowed mode instead of fullscreen greatly reduces this problem). Regardless of these issues, Runner2 is a great gaming experience chock-full of fast-paced action that will make your daily jog after work seem a lot duller than before. Grab a rainbow and go for the gold!

Linux:
Get the full version (via Steam)