In the grand scheme of things, match-3 puzzle games might be some of the simplest to make in their most basic incarnation, but taking that simple formula and making it feel fresh and fun takes a bit more ingenuity. Good thing Playcademy seems to have that in spades, with Runefall being one of the most relaxing and enjoyable additions to the genre to come along in a long time. In it, you find yourself in the tiny town of Riverfell, which has had difficulty making ends meet and finding enough to make their tribute to the kingdom ever since the war brought the trade routes to a screeching halt. But when you discover magical, valuable runes while out searching for the resources needed to pay tribute? Well, that's another matter entirely, and suddenly sleepy Riverfell isn't so sleepy at all. Despite some issues with repetition and variation, a genuinely likable cast and engaging story alongside addictive match-3 gameplay makes Runefall a rocksolid addition to the genre that's well worth checking out and losing a few hours to, as comforting and enjoyable as loading up your favourite light fantasy film while wearing your comfiest socks and sipping your favourite beverage. 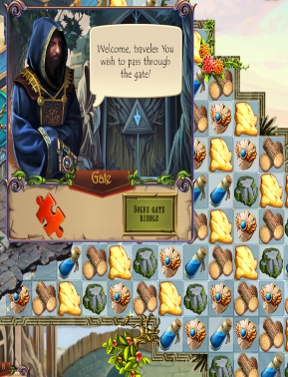 Runefall's gameplay combines match-3 puzzle solving with resource gathering, with the matches you make of three or more of the same icons both collecting that icon's corresponding element, and moving you around the "map" of each level in the direction of the match, which is important since levels are sprawling and don't fit on one screen. Wood, stone, and gold are used to buy upgrades for the town or pay the tribute, while blue potions refill your powerups, and enough shields will let you teleport anywhere on the map you've already been. In addition to the usual obstacles, like blocks or crates you'll need to make matches alongside to shatter to pass through, you'll also find locations you'll need special items to cross, such as a boat for a river, or an axe for a deadfall. The items can be hiding under tiles like grass or sand, so you'll want to search those when your cursor begins glowing. Later, you'll also discover additional items you can turn in to the people back in town to complete sidequests, and you'll even encounter puzzles of all kinds you'll need to solve before you can continue on through the map. While you can play under a time limit if you like a challenge, or relaxed mode without the timer if you like to take it easy, each level ends when you've found all the chronicle runes there are to find. 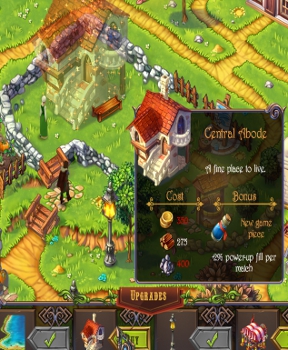 A large part of what makes Runefall great is how genuinely funny and entertaining its story is. The writing is great, with light humour and instantly likable characters... it feels like a traditional late '80s, early '90s fantasy movie, and I mean that in the fondest way possible. With its mostly lighthearted tone, the bratty princess who's more than she appears and learns to appreciate others, the doddering old knight who can't fix a fence and more, it doesn't exactly break new ground, but it provides a warm and engaging little world with a cast you want to see more of. (The little love story between two of the older characters? So cute.) The story and presentation make Runefall an easy recommendation for any casual fantasy fan looking for something light and engaging, and it's easy on the eyes to boot. Despite this, Runefall has a few things holding it back, chief among it the overall lack of variety that becomes apparent later in the game. Levels are big enough that moving around quickly becomes tiresome, and it just doesn't move fast enough, needing a little more oomph to sustain you when you're gathering the same resources over and over and over again, though thankfully you'll unlock other tile types as you go. The puzzles sprinkled throughout are a welcome enough respite that it's a shame there aren't move of, though the ability to skip some and not others is a little perplexing. Despite that, Runefall is just so darned pleasant and earnestly enjoyable that it deserves a lot more attention from fans of the genre. It's fun, cheerful, and a welcome breath of fresh air from all of the "serious" fantasy material, and definitely worth checking out.

What is the piano music being played during Runefall? It sounds very familiar, but I cannot remember what it is. Thanks