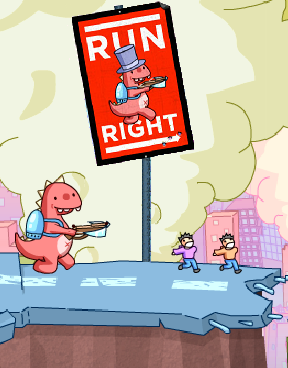 Y'know, one of these days the Earth-shattering apocalypse is going to start in the east. And then, boy howdy, all those left-averse building-leaping parkour free-runners are going to feel pretty foolish when they take off in the wrong direction. But the jetpack-wearing weapon-wielding dinosaur star of John Cooney and Jimp's new jump and run and gun action platformer knows that in the world of casual gaming, it's usually a good idea to Run Right.

Starting on the west coast of America and heading east, the goal is to run your dino through a variety of major metropolitan areas. Use the [WASD] or [arrow] keys to move your character, jumping to avoid spikes, meteors and pits. Holding [W] or [up] will fire up your jetpack, allowing for a little more air time. Question Mark circles will trigger a random consequence spun at the bottom of the screen. There are humans trying to run right alongside you. While they'll prove no obstacle for your dino feet, blasting them with a weapon by aiming and clicking with the mouse will explode them into a mass of coins. Collect them to purchase upgrades between levels, including speed-boosting vehicles, extra rocket fuel, and the most important upgrade of all: the jaunty top hat.

While definitely an innovator, Jmtb02 is also a master of casual gaming remixes, taking familiar premises and putting his unique spin on the concept. Run Right is no different. In some ways, it is a refined combination of the frenetic fun of both Canabalt and jmtb02's own Treadmillasaurus Rex. However, along with the always-welcome chance to squish a few puny humans, Run Right gives a palpable sense of progress that many games of its ilk lack. Ticking off each city as you travel from coast to coast makes for a minimal, but satisfying narrative arc. It would have been nice if the different cities were a little more distinct: After all, one should never miss an opportunity to depict a Triceratops chomping on the St. Louis Arch. Jimp's art is amazing, as always, though its cartoonish qualities highlight the wackier elements in a way that could be misconstrued as pandering to random internet humor. Dinosaurs may not be as overdone as zombies, pirates, ninjas and kitties, but the minute they jump on a penny-farthing bicycle, you have to figure someone's already selling that t-shirt. Kidding aside, Run Right is a solid running game with tight controls and charm aplenty. Run right to it, right now!

I pretty much know by now that if the game comes from jmtb02, I'm going to like it.

This one isn't a huge challenge, but it's an amusing diversion for a while.

Good controls, no grinding, and a few giggles along the way.

How do you get the "Reach 10,000 without collecting a coin" bonus? I've collected nothing for that distance multiple times with no luck...

I found a pretty major (but useful for the player) bug:

If you collect enough cash to skip some tiers in the upgrades, you'll still only pay the amount of the lowest one you don't have. I had the first couple of jump upgrades, then saved up for the $1000 level, but when I bought it I only lost $300 (same happened with the other upgrades).

Fun game, love that my city made the list! It's so pretty in its cartoon destruction.

@brianjthompson
Yeah, I tried and tried for that, but couldn't get it either.
There's a few glitches in the game:
-The mentioned 10,000 without getting a coin.
-Going back to other cities before finishing the game will make it think you've finished more and more levels.
-It'd be nice to select between the guns you own. Skipping an upgrade and then going back to it later will 'downgrade' you; until you buy a better gun, you're stuck. Also, I preferred some lower guns to the higher ones.

Hey, there's no autosave... if you quit the game you lose all your progress.

Yeah, glitchy game. I was able to crash it somehow. I started theDallas level and the floor was there for the first 4 steps and the game started before the sign went away. If you tired to fly, you would get 3/4 of the way to the edge of the screen and you fall no mater how much fuel you had. So I tried to refresh the game and yep, no save like mentioned before.

@bluegriffin18 It seems the motorcycle is bugged...

Another bug, When you finish a level pass, a little chance will make a progress on the stage...

Laser gun and chain gun is the gun I have only buy...