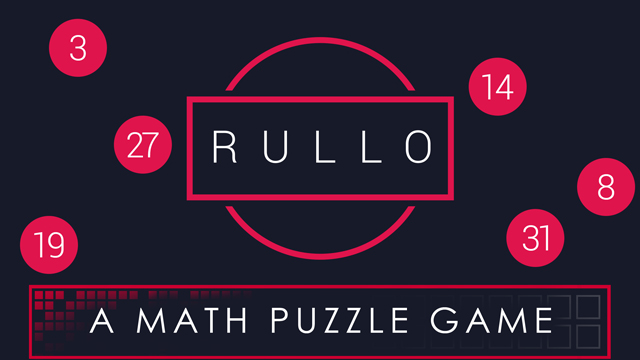 While making my way through the net, looking for flash games to play, I've found this little gem. The game Rullo by Elihu Gideon and developed by Crescentyr, is one of those games that follow the concept of simple rules, but challenging game.

Note: this game has been reviewed in August. One week ago, the developer and Akkad published an iOS and android version of the game with more features.

In this game you have a board full of numbers, and your goal is to make the sum of every row and column equal to the number in the box next to it. And how do you do it? By turning off numbers in the board, and excluding them from the sum. Clicking on a number in the board will toggle it on and off. A long click on a number can lock it, so it won't turn off. When a row or column is solved, the box next to it will glow, and it can be locked by clicking the box.

The game comes in four board sizes, from 5x5 to 8x8, and three number ranges for the numbers on the board: 1-9, 2-4 and 1-19. Now first of all, I must confess - I really like number puzzles, mainly those that have simple rules but can get really complicated, like Sudoku and such. This game fits exactly to this category. It has simple rules, and after the short tutorial in the game everyone would manage to play it. But it tends to be really hard (I found myself banging my head on the keyboard trying to solve a 7x7 2-4 game).

The game's graphics are minimalistic and flowing, thus creating a relaxing atmosphere. They are very polished and well made, and make the game very playable and easy to handle. The game features a layout of similar to a mobile app, with a small pop-up toolbar at the bottom, which can be opened for options. It looks like the Android/iOS version will follow soon.

The game's sound comes along with the graphics - flowing, relaxing tunes that contribute to a relaxing atmosphere. All in all, it's a very nice game, which I'd like to take me with to pass the time and relax my mind.

Nice. With almost every puzzle I try, I almost stop, thinking "This one is too hard", but then I think "Wait ...", and find the one clue that unlocks it.

While this is re-frontpaged, I'd like to point out that the developers have added a very important feature in the mobile (and Kongregate) versions of the game:

Tapping on a sum clue box now shows the current sum next to it.

The mobile app (I tried the Google Play app) has an additional option to enable number flagging, and a button that just turns every number off. Depending on how you puzzle, these may be big features that sway you towards the mobile versions.

When I click on the Google Play link it says it's not available in my country. I'm not running a VPN and am in the States.

The link is now available for any country. Two new features have been added: Undo button & the possibility to save and load a grid.