Asher Vollmer's Royals, a retro indie sim/rags-to-hopefully-riches story, stars you as a lowly, dirty serf who has aspirations of becoming royalty... easier said than done considering all you have is your puny farmland and no skills, followers, or other resources whatsoever. Your goal is to explore the surrounding lands and figure out how to gain the people, power, and everything else you need to eventually become a royal yourself. The game is turn-based, with each turn costing you a year of your life and a part of your remaining health. Use the [arrow] keys to move around the screen, [Z] to select and confirm, and [X] to cancel. The symbols at the bottom of the screen represent, from left to right, your health, might, charisma, resources, money, followers, and held lands. Various actions can change these statistics accordingly... meditating on a mountain, for example, can raise your charisma, which in turn raises your chances of potentially converting followers or otherwise swaying people to your following. Each game's map is randomly generated, and it's a matter of trial-and-error to figure out how things work and how to best go about your rise to power. Will you die in obscurity with your dreams unrealized? Be struck down for reaching too high above your station by the current rulers? Or maybe, just maybe... get a throne of your own? Be warned, there is no save function, and if you close the game and come back later, you'll start over with a new map! 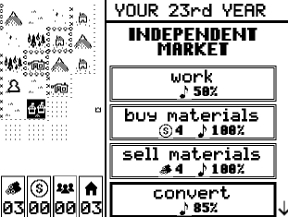 Perhaps unsurprisingly given Asher Vollmer is part of the team behind Threes!, Royals is both simple to pick up, and also surprisingly addictive. While you'll need to flounder a little in the beginning to learn the ropes, Royals is all about managing your skills and using them to their greatest effectiveness. You'll likely take a while to learn how to best balance increasing your abilities and land in ways that benefit you in the long term, while keeping your health up so you don't keel over before reaching greatness. For some, that's part of the appeal, and the little secrets you'll uncover as you schmooze, meditate, spelunk, and build your way to greatness add an appealing spark to the spartan design. For others, the trial-and-error might prove a little frustrating, since it's easy to dig yourself a hole you can't get out of by making the wrong choices early on, and managing your health feels like an uphill battle, especially if you find yourself struggling to find or recruit enough followers to help you with tasks. Still, Royals is one of those games that's a lot more complex than it initially seems, and a lot more rewarding, too. Its simple controls and randomly generated maps make it easy to pick up for a minute or thirty, and its old-school vibe, from the graphics to the gameplay, make it appealingly nostalgic to us old timers without feeling like nostalgia is all it has to offer. If you're looking for a game that combines strategy and simple simulation mechanics, Royals is well worth a download, and may keep you entertained for longer than you expect.

Windows:
Get the full version (Pay What You Want)

Wow. This is a hard game with great depth.

It takes a few tries to grasp the game mecanism, so prepare to horribly fail in your first few games.

But there are some very interresting mecanism, such as the aging system. It elegantly forces you to adopt very different play style depending on how old you are.

So far, I got one ending, but I suspect the game to contain 4 or 5 differents ways to win, each requiring very different strategies.

By I reckon, the game is hard. At least for a beginner like me.

If ever the developper reads this comment (Hello Dev !), a nice addition would be to let your followers keep doing the same action...

As Asher Vollmer states, you can't find the manual. It big part of the game is to figure out what is going on : how to survive, and eventually how to conquer the castle.

But for those who want some help, here is a quick guide detailling many concepts :

Your life is running away !

Each year (a turn), you are spending 1 life point. You start with 20 points, which means that if you don't find a way to restore some life, you won't be able to play more than 20 turns...

Resting is the way to restore life. Some places are better than others for that, and they also reduce your military power or your charisma. So choose visely where you want to stay.

Beware ! You are growing old...

As your character is growing older, it spends more life every year. At the beginning of the game, you only spend one life per turn, so it you can travel and do many things whithout much problem. But when you old enough to spend 3 life per turn, it is crucial to rest almost every turn, either in a mansion or a garrison...

Followers do stuff for you

To play long enough, you will need to rest. But every time you rest, you can't do any action. So, unless you have followers doing stuff for you, you won't go very far...

The question now is how to get followers ?

Each building contains a potential follower, and most buildings can be converted. Charisma increases the chance of success (up to 100% chance, so a garantied success). Of course some buildings are easier to convert that others : 4 in charisma will be enough to have 100% chance to convert an independant house. While it will not nearly be enough for others.
If you want to recover this building follower, you can rally or destroy the building.

You can also use military force to ransack buildings. Ransacking a building earns you one follower, plus some goods. But the building will be destroyed, and it will piss of the monarch...

Spelunking can be dangerous, but it also often grants some followers (on first exploration only. At least, I believe so...)

Things you wan't to do yourself

You can send followers do any action you would be able to do yourself (well, most...). And they will have the same Charisma / military strentght bonus as you. Which is extremelly useful.

However, there are some actions which impact the character doing it. oO, when they are done by a follower, you don't get any benefit from it...

Meditating in a mountain will increase your charisma. Hunting in the forest will increase your military strength.
But only if you do it yourself. Followers you send to these tasks will be delighted. But appart from that, you won't get much return...

Drinking in a tavern will also provide a great bonus to charisma, but only if you do it yourself.

However, there are ways to grow your stats using followers :

In Inns, followers can shmooze to improve your charisma, and followers working in forge can increase your military strenght. This will be important when you'll start aging and have to rest a lot.

Obviously,followers can't rest for you...

More ! More ! You wan't to possess everything !
Well, yes you can. But actually you can make use of most building even if you don't own them.

Basically, you can use any building, but it will be cheaper of free if you own it; and more expensive if it is owned by the monarch

You and your followers can work in buildings independantly on property (such as taverns, and markets). You can also exploit fields and mines whether they are yours or independant

The monarch makes it difficult !

However, even if you are alowed to used the building controlled by the monarch (and the can prove usefull for you), be aware that he will be displeased by most action not involving cash (such as resting in a field, hunting, and of course converting one of his buildings...)

Explore the world, but don't get mugged

You'll soon notice : the visible area is pretty limited (a 7x7 square tiles). You can't send followers nor do actions out of this area. So take into account when moving.

Armies arrives at the corner of the map. But they disappear if they get out of sitgh. So when they arrive from 1 or 2 sides only, it is easy to escape by moving one or 2 tiles away.

You can't move onto unrevealed tiles. But followers will reveal them when sent to a neightbouring tile. So, you can use them to speed exploration, and eventually travel quicker through unexplored territories.

Due to the resting mecanism consuming charisma OR military power, in mid games you'll probably have to specialise in one or the other stat.
Remember that most actions (recruiting / converting / wining...) can be executed both with charisma or military strenght. So two different path are possible.
However, once you've got a good economy going (usually in late game), it is possible raise both stats

Also, there are different path to victory : You can either grow on your side and build your own empire, almost without ever moving.
Or you can move around a lot and conquer whatever you find, including the monarch's properties. Both playstyle are perfectly viable.

Well, I realise that haven't mentionned ressources and gold production yet. But for now, I'll let you figure these things out...

I think I beat the game

Haha, not bad ! But there is still a secret ending to find. ;)

How do you get the secret ending?

I have no idea ! But it has something to do with some reptiles...

To get the sovereign snake warlock ending

Make a cross with a manor in the middle and 4 houses up, down, left, right of the manor