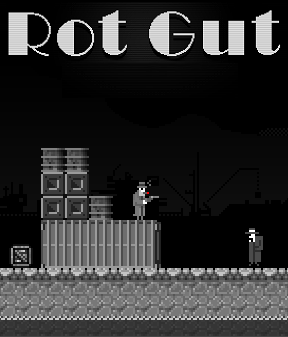 Your friend deserved a better end than this: Either asleep in his bed thirty years from now, or in a blaze of glory. Not at the end of the bottle of the tainted poison that the syndicate is trying to pass off as hooch. There's a reason why that drek was prohibited in the first place. You may be just one man, but one man with a gun in his hand is often all you need to find some answers. Rot Gut is an action platform shooter by test84, set in a pixelated depiction of 1920's big city gangland. It's as gritty as cigarette ash, and will hit you like a quick shot of whiskey.

Move with [WASD] or the [arrow keys], and jump/double jump with [up], [K] or [X]. [Spacebar], [L] or [C] will fire your weapon at the waves of henchthugs, and you change your weapon with [down] or [S]. Shooting baddies and bonus crates will spawn coins, used to purchase health and ammo for your more powerful weapons. Explore each level to find the exit, and stop these bootleggers once and for all! Rot Gut has style to spare, with a jazzy sort of atmosphere that's really unique in modern games. It's noir to be certain, but more the proto-noir of gangster movies like Little Ceaser and White Heat, rather than of hard-boiled private eyes. It's a stunning world for your senses to play around in, with a lot of cool details like the clink of shotgun shells as they bounce on the ground or how your fedora pops up from your head as you jump. Gameplay is solidly enjoyable enough, though the somewhat generic level design and play mechanics don't quite live up to the promise of the aesthetic. Still, Rot Gut is a romp-and-a-half to gun through, and its charms owe as much to the console games of the 80s as the speakeasies of the 20s.

Excellent little game. Quick, but the atmosphere was cool, and it presented enough of a challenge that it didn't get boring. :)

Short and sweet, my only little complaint is not being able to turn off the music and leave the sfx.