The woods are no place to be stranded in. You can lose your way; you can lose your mind; you can even lose yourself. Developed by Simulated Culture, Rootwork is a new strategic card game that drops you into the heart of the deepest, darkest forest and challenges you to make it out safely. However, a stray critter or a thorny bush are the least of your troubles here. These woods are full of dark forces and malevolent spirits, and at the center of the dark maelstrom is "She." Who is She? That's uncertain. But these are Her woods, and if She wants you to stay lost forever the odds are stacked against you. 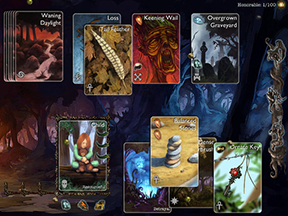 Luckily, you are not alone. A mysterious Hoodoo man and his son Lucas appear to guide you and protect you with the power of Rootwork. Rootwork refers to Hoodoo practices of using found objects — a feather, a key, some river stones, etc. — to weave together powerful spells. With these simple items at your side, you might just stand a chance of escaping. Maybe.

The game begins with a thorough tutorial explaining the mechanics of Rootwork. Your goal is to flee the forest by visiting three specific Milestones before the sun goes down. Each round, you draw up to five Survival Cards. These are the tools you will use to bypass the Threats that block your passage. You then draw two Threat Cards and one Site Card, which hopefully contains one of the Milestones you need. There are four suits: Fury, Corruption, Deceit and Loss. Every Threat Card and Site Card contains up to two curses in a given suit. In order to access the Milestone on the Site Card, you need to nullify the curses on all three cards by placing Survival Cards of the same suit upon them (by tapping and dragging). However, if you're short on suits, every Survival Card can be turned face down (via a quick double-tap) and placed on any card to remove half a curse of any suit.

There are also special cards such as the Dense Underbrush, which acts as a wild card, and Strange Cairn, which allows you to peek at the top card of any of the four Site Decks. You also have pocket space which can be used to hold extra cards, although only one pocketed card can be played at any given time. Should you fail to remove the curses of either of the Threat Cards, you wil incur their wrath. Menaces will burden you with fright (get frightened more than three times and it's game over) while Sticks will take up pocket space and become irremovable. 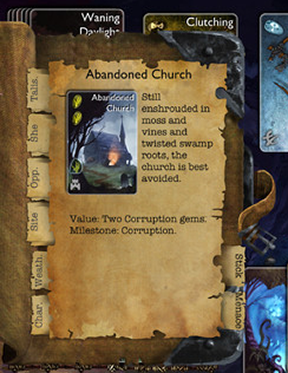 Of course, there are a few more intricacies to the game, and it takes a minute or two to get the hang of, but Rootwork is by no means overly complex. Once you grasp the basic mechanics, jumping in is actually quite simple, and a game only takes a couple of minutes to complete. And once you've got the hang of one character, you can switch to another, which changes how many cards you can carry in your hand and/or pocket.

Analysis: It's always refreshing to see a card game that isn't based around battling a series of increasingly redundant monsters. Even if the backbone of Rootwork is a simple suit matching game, the idea is conceptually pleasing and has clearly been given plenty of thought. By escaping the forest multiple times you can unlock extra cards, characters and videos explaining the origin of the four great menaces, Ruin, Blight, Snare and Mourne, and the dark force controlling them all. There's certainly plenty of atmosphere and intrigue to be had here, which is something you don't often get with a card game that is this easy to play.

If there's one downside, it's that the unlockable cards and different characters don't add a tremendous deal of strategic variety to the mix. And since all of the unlockables and achievements basically require you playing through the game a bunch of times (and we do mean a bunch — one achievement requires over 1,000 wins) tedium can set in quickly if you're just playing game after game after game. You can unlock all the cards via an in-app purchase, but if you do so, Lucas will berate you for cheating. (You can't buy your way to victory!)

But like the old standby Solitaire, Rootwork is a game you just find yourself coming back to for a quick round or seven. And unlike Solitaire, Rootwork is atmospheric, aesthetically pleasing and full of mystique. If you're looking for an interesting and unique card game, you could do far worse than to get lost in the woods of Rootwork.

Thanks very much for this review! I would like to quote part of it in our App Store description if that is ok with you.

Oh great, thanks a LOT...just what I need, a new game addiction.

But seriously, this is one heck of a good game IMO: very well thought out, and nicely balanced between simplicity for new players and positive reinforcement for those who wish to master its subtleties. Five shrooms, no question.