So it has happened again, has it? You have ended up trapped in a strange room. Obvious methods to escape from this room elude you. No keys, crowbars or climbing out the window will work. On hand instead: various puzzles to be solved, done by searching the room for essential objects and various clues, using your ingenuity to decipher the riddles throughout. What's that you ask? Why not just break down the door with your brute force? Because this door is not simply locked, it's guarded by a secret code that, should you fail, threatens to dismantle the entire room—you right along with it. Which is just one of the reasons Gam.eBB's mobile game Room Escape [Secret Code] is such a kick to play! 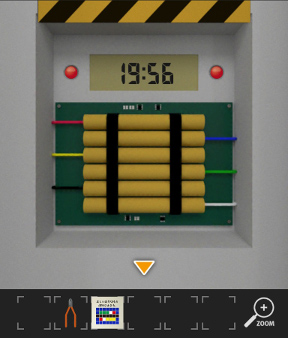 Play by tapping around the scene to zoom in on active areas or pick-up objects. Navigate by tapping the arrows along the bottom. Inventory is easily accessed by a tap as well: Tap to select then tap again to try using the highlighted item where you think it might work. This can lead to a little trial-and-error as there's not much to distinguish one key from the next. Fortunately, even without a changing cursor, active spots are large enough to prevent pixel hunts. Nevertheless, your observation skills will be well-tested here; keep eyes sharp and look closely at every angle. Room Escape [Secret Code] is as enjoyable as you'd expect from the developer of the Dismantlement series. In fact, it does feel a bit like dismantling the room as you go about unlocking the uniquely shaped safes and opening a series of locked cupboards and drawers. Clues are often too straight-forward too offer much challenge but it's the design that makes the game interesting. Its presentation is creatively clever enough to engage your brain and make a successful escape come well-earned. It also doesn't hurt that this minimally-dressed little room is so pretty; the serene setting boosts plenty to explore and do, keeping you well occupied for about an hour, give or take. The point is, Room Escape [Secret Code] is fun! This is the type of escape game we all crave, perfectly suited for playing on the go.