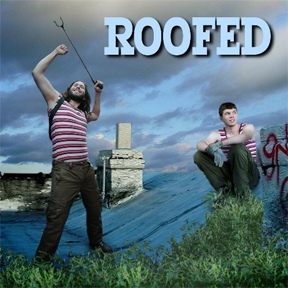 Roofed starts out with you in a precarious position: you're dangling from a chimney on a rooftop six stories above ground, looking for spider silk. Your brother's making sure the door to the stairs back down stays open. When he appears below you looking nonchalant, you get a deep sinking feeling.

Like other entries in Casual Gameplay Design Competition #7, Jim Munroe's Roofed is a work of interactive fiction in which you enter commands after a prompt to examine your environment and solve puzzles, moving the story forward. For old hands at interactive fiction, it'll be easy to pick up, but for people playing IF for the first time, it might have a bit of a learning curve. Anton, your brother, provides a simple help system in the form of the verbs and syntax you'll need to complete the story, but the logic of the puzzles isn't always immediately clear.

Analysis: In terms of the writing, Roofed really stands out. The far-future setting comes across clearly just through casual mentions and Anton's quips. He's a compelling character, and an excellent example of a well-implemented NPC sidekick: although he doesn't interact with the environment in any permanent way, his bits of stage business feel authentic and in-character. Unlike some NPCs in other IF games who stand passively and wait for you to do something, Anton wanders around the rooftop, yells for help to no avail, and stares off into the distance, lost in his own head. He feels real, which is impressive considering the limited scope and timeframe of the CGDC.

Sometimes, though, he falls down. Although Anton prompts you to ask him about things, there are very few working topics for him to answer, and his 'I don't understand what you mean' message is actually 'I don't think you're ready to know about that yet.' It fits Anton's character, because he's trying to look like he knows what he's doing, but it comes across more harshly and can make an already frustrated player feel like they're being mocked. I also ran across some other implementation problems when I examined the containment unit: the dynamic description had broken somehow, so it ended mid-sentence. Aside from that, the implementation of the puzzles is solid, and the solutions are creative and reward lateral thinking.

Overall, my only real problem with this game is that I didn't want it to end. I want to know more about Anton and his brother and about the world that they live in. If you're a pro at IF, then it's a nice coffee break diversion; if you're new to the world of text adventures, then it'll take a bit of effort to get used to the interface, but it's well worth it to check out the writing. Roofed is a taste of quality IF that will get you hungry for more.

First, you need to get down.

examine the chimney, and the graffiti (for later)

Now, you need to get to the top of the chimney. There's no handholds!

Go to the garden..

go back to the chimney and climb halfway up..

throw the cucumber at the chimney.

now, go up, look inside the chimney..

.. and get the silk with the claw.

and look at the top of the cube.

get large silk with claw..

How to I get out?

look west of the cube..

hmm. too far to jump. Try the door?

nope, although doing that unlocks the next scene. go to the empty corner.

Oh, those silly boys, messign with you. That made anton mad!

go to the garden..

what a wimpy plank!

go to the cube.

anton needs to be calm..

First, you need to get down.

examine the chimney, and the graffiti (for later)

Now, you need to get to the top of the chimney. There's no handholds!

Go to the garden..

go back to the chimney and climb halfway up..

throw the cucumber at the chimney.

now, go up, look inside the chimney..

.. and get the silk with the claw.

and look at the top of the cube.

get large silk with claw..

How to I get out?

look west of the cube..

hmm. too far to jump. Try the door?

nope, although doing that unlocks the next scene. go to the empty corner.

Oh, those silly boys, messign with you. That made anton mad!

go to the garden..

what a wimpy plank!

go to the cube.

anton needs to be calm..

the games seems to load ok the picture comes up with the brothers on the roof and when i click on there the wording comes up ok. I read and then click more and nothing happens. how do i proceed with the game?

[Roofed is a work of interactive fiction, and it's all text (apart from the opening screen). All interaction is handled through the keyboard. -Jay]

Anton died! Some guys came upstairs with guns and tell me that I can undo, but it keeps putting me right back to his death scene, even if I try typing undo more than once.

Any idea how to fix this?

I hit undo, then east, and the guy shot me. (I thought I had undone my turn and was back on the roof with Anton. Now I'm quite confused.)

I hadn't saved anywhere, so looks like I'm starting over later on tonight.

Sorry for the double post, I often see people extol the power of posting here, I think it worked backwards for me. :(

How to get across the plank

Before you put it to down
clean plank

Stuck at "try the door". I have gotten the silk on top of the exit cube and looked across determining that I cannot jump. It says that isn't a command. What am I supposed to do?

You've got the right idea with undo, you're just not going far enough with it...

"open door" would be a more straightforward command, but that door isn't going to get you anywhere anyway.

"Anton appears to be negotiating with the door, but it doesn't seem to be going well." LOL! Great line.
This game was fun, though there was no way I could have done it without the walkthrough. :)

Great game. Haven't done any IF in a while so this was good to get back into it.

I actually almost teared up when Anton died my first play-through..

This was one of my favorite entries from the competition, the writers should definitely produce more stories of these two brothers!

When I played through this

Anton never died. How did that happen for you guys?

Got through it this time. It helped that I knew where I went wrong. What happened was

I didn't clean the mess off the plank, or warn Anton, and he slipped to his death. I agree with Andrew, it really got to me, especially because it was so well written. Then the Matrix-esque scene that followed threw me. An excellent incorporation of the undo feature and it fit beautifully into the future setting, but the entire premise terrifies me like very few things manage to do.

I loved this game. I play every IF game that I can find, but still often end up resorting to walkthroughs or hints at least once or twice. Even after my troubles the first time around, I got everything just fine my second time around, which can't be said for all IF games(Varicella, anyone?) I absolutely hope to see more from these developers in the future. The writing was very believable and Anton added a great bit of comic relief to my day. Bravo!

Hey guys -- wow, thanks for the responses! It's really encouraging to hear. I didn't know if that dual ending thing was going to work or not. As far as seeing more from the "developers" (ie me *grin*) you might want to check out another game I made Everybody Dies. And in terms of seeing Anton and Toph specifically, they're characters from a movie I wrote that's coming out later this year.

Xavea/Jim: I think the problem is that

Parchment only supports a single "undo," so if you're playing in Parchment by the time you get to the modders it's too late. Don't know about the other online interpreter.

I did appreciate the appearance of the Bad Seeds.

Good catch Matt W., I didn't know that. That's the case with the Flash interpreter too.

However, even with one undo it's possible to win the game after Anton dies:

You have to TAKE BLOB after you UNDO.

Is there someplace I can download this? The white on black really messes with my eyes

[There's a download link below the game on the competition page along with other info about the entry. -Jay]

i can't get anton to die!
plz help? tell me how to get the death ending.
I didn't clean the plank or use silk on it. I don't know what kind of mess xavea was talking about. pleas help!

Xavea! How did you do that? Pleeease tell me how! I WANNA DO THAT!