Ah, Rome, the eternal city! The magnificent ruins, the seven hills, the street urchins stealing from the blind... well, perhaps the glory of ancient Rome wasn't all it cracked up to be. You can play Romance of Rome, however, and still get a taste of what it might be like to wander the ancient city. Presuming that the population of ancient imperial Rome spent a lot of time searching for lost and hidden objects, that is. Developed by Awem Studios, Romance of Rome is a beautiful point-and-click adventure/hidden object hybrid that takes you on a tour through the glorious city of history and myth. 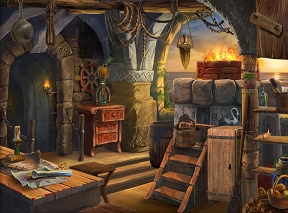 You play Marcus, a lowly wanderer who chances upon a lovely lady being attacked by wolves. Soon after you save her you find yourself tied to a tree, then rescued by a nice citizen by the name of Octavio. What a day. Follow Marcus as he attempts to become somebody in a city already chock-full of somebodies, finding lost objects, running errands for various citizens (some shady), solving mysteries, and attempting to find the coincidentally missing Imperial Relics. You know, as you do.

As you first enter Rome there are only a few locations hearkening back to Rome's distant past, before it became the city that it became. A map of the city shows the locations, with new places adding in as you progress through each section. Anyone who has played Awem's fantastic Cradle of Rome (a match-3 game) will recognize the dynamic. Each round builds up more locations until the ancient city sprawls in all its glory across the landscape.

Each location on the map lets you know how many objects there are to find, as well as how many puzzles there are to solve. Once you are in a location the objects you need to find appear not as a text list but as pictures of the items. Objects with a green background are things that will go into your inventory which will help you solve the many puzzles, usually in different locations. Travel back and forth between the scenes until all objects are found and you have completed the tasks requested of you. Every object found and every task completed earns you money and status as you quickly work your way up the social ladder. 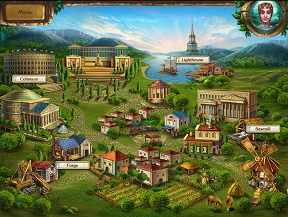 Marcus' climb from ragged wanderer to civic star is accomplished not only by finding items and solving puzzles but by outfitting himself by spending his hard-earned cash with the local merchants, dressing him up in the finest clothes and accoutrements available to the newly rich. Shop using the money earned (and extra coins that are hidden in each scene) to make Marcus look like the best dressed citizen of Rome, along with all the baubles and geegaws that benefit a man of his status. Because really, you aren't anyone in Rome until you own your own estate, or have your own private ship.

Analysis: What makes a game stand out from the glut of adventure/hidden object hybrids? Lots of attention to detail, not only in the gorgeous backgrounds of the locations but in the overall package: appropriate music and incidental sounds, voice acting to bring the characters to life, interesting puzzles to solve, and challenging hidden object goodness. Romance of Rome includes all of these and more. One interesting tactic is to jettison the mini-game concept all together and concentrating just on the hidden object and puzzle solving aspects of the game. 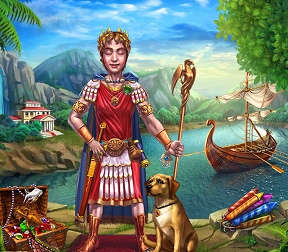 Another wonderful detail is that the hidden objects themselves are not anachronistic to the time period. Granted, you might not find all of these objects in ancient Rome (some are from other cultures), but they at least blend into the scenery and the time period. No searching for skateboards or rollerblades. This adds an immersive element lacking in many adventure/hidden object hybrids.

One of the nicest details is the attention to the continuity of the scenes. In the tavern scene you might end up having to crack an egg to solve a puzzle. When you return to the scene several levels later you will find the eggshell fragments still littering the table. This is true everywhere: bread once sliced remains sliced, cabinets and boxes once opened are still open later. Each cartoon sequence between the levels shows Marcus in his newer and ever increasing finery as he interacts with various citizens.

With seven levels, each level housing four or five separate scenes, the game is not as long as it could have been. Unfortunately, these shorter games appear to be here to stay, but what it lacks in length it makes up in quality. The hidden objects are extremely well hidden, blending so carefully with the background they can be very tricky to spot. Unfortunately, the game sometimes falls back on the tactic of reducing the object to a teensy size and placing it far in the background, making some items almost impossible to find unless you have very good eyesight. Fortunately, a refilling hint timer to helps alleviate that problem.

Romance of Rome is a fabulous, clever, immersive adventure/hidden object hybrid. The breakdown of the game into levels lends itself well to casual gameplay. Play a level at a time, or just immerse yourself and play through the whole thing in one shot. The best experience, however, is not to speed through the game but to take a leisurely stroll through ancient Rome. Slow down, relax, enjoy the sumptuous backgrounds and details, and explore the Romance of Rome!

CONGRATULATIONS! You fulfilled all tasks. Now lean back and enjoy the final!

Super awesome thanks to Kayleigh for putting together this fantastic walkthrough \o/.

CONGRATULATIONS! You fulfilled all tasks. Now lean back and enjoy the final!

Super awesome thanks to Kayleigh for putting together this fantastic walkthrough \o/.

I have to say, I'm undecided on how I feel about this game. I thought the graphics and storyline were very well done. I enjoy a game with a challenge, but in this case it seemed that the game would have been endless were it not for the hint button.

Some of the objects were nearly impossible to find. Some objects were different colors then the picture shown. Others were tucked away behind, under on within another graphic with only a small portion of the object being visible.

Since you have to collect objects to complete tasks in certain scenes before other objects are revealed, I did like the fact that a scene would warn you that there was nothing left to do in that location.

Overall, I really liked this game, and would recommend it to everyone. Still, if you play these games as a time killer or in a more casual way, this might not be the game for you.

monkeymynd - note about all tasks done
- When ever you finished all tasks in a certain location, there is a pop up window telling you that.
- A pop up window shows up also to tell you, that there is nothing left to do until you find tools in other locations.
- That you are done with finding all objects you can see because your list is empty.
- When all tasks in a certain location are done, you also have a mark on the map to show that everything is done.