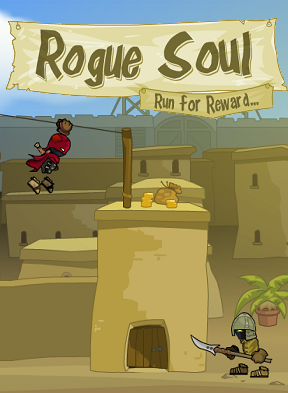 For months, Rogue Soul has prided himself on being the most lovable rogue in the city. After all, he antagonizes those jerks in the city watch, woos fair damsels, parkours his way through the market-place nearly every morning, and robs from the rich to give to the... Well, robs from the rich in any case. So when he sees that this "Borin Hood" has come to town and instantly commands a 5000 soulon reward, Rogue knows that he'll have to step things up and raise his profile the only way he knows how. Rogue Soul is a jump and run action game by Soul Game Studio that puts players through a free-running paradise where Aladdin, Altair, and Faith would feel equally at home.

Use the [arrow] keys to move, jump and drop your way across the cityscape, grabbing as much coin as you can. Naturally there are obstacles to avoid, starting with pits you need to jump over and low hanging walls to slide under with a press of the [F] key. Then there are the guards of the city: spearmen, soldiers, archers, axemen, assassins. You'll attack them automatically as you run into them, but be sure to time yourself so you don't end up skewered. Various pick-ups will aid your free-running. Parachutes, activated with [D] will grant you extra hang time in the air. Daggers, usually found in barrels or attached to wanted posters, can attack enemies from a distance when thrown with [G], and armor will allow you to survive a single hit. If you can pick up a flower and successfully grant it to Souly, your main squeeze, she'll lift your spirits and give you a supply of double jumps. Treasure chests, and other secret bonuses litter the landscape for those with sharp eyes. Get your reward above 5000 soulons, and the game is won!

Rogue Soul fully understands what many of the genre do not: it's not speed that makes jumping and running fun, but flow... the feeling you get when your reflexes are perfectly in tuned with the game mechanics. As you slide down a clothing line, bounce off a market stall, swipe a goblet, throw a knife at of those pesky archers, and deliver a flower to a pretty girl, before parachuting into a convenient hay stack, all without breaking your stride, Rogue Soul will give you the feeling of being unstoppable... Until you get an ax upside the head three seconds later. It takes practice to become perfect, of course, since Rogue Soul is not a forgiving game. But with its host of unlockable treasures and missions, it is a very rewarding one. Combing the cuteness of Wink, with the intensity of the Prince of Persia, Rogue Soul is sure to keep your keyboard pounding as you stay one swing ahead of the sword, stealing only what you can't afford. (Which is everything!)

how to do broken tibia?? that is only loot i cant get

All you have to do is tackle 100 enemies which basically means you slide "d key" into the enemies, do this on archers, soldiers, brutes, and captains, this will not work on spearmen or the Black Knight due to their attacks

is there a way to beat the black captain?
or am i just doing something wrong?

how to double jump

Fun game except for two things:
1. I can't resize the game by zooming in and out. Not a major problem; this happens with a lot of games.
2. This one's big. If I come to a wall I need to slide under, and my reflexes aren't fast enough to slide before I reach it, he latches onto the wall trying to push it and I have to back up (which doesn't happen right away, because he's trying to push the giant wall) and try again. By that time, the screen's moved past me and the run ends. This happens nearly every time and makes the game really hard to play.