Just because you saved some guy from a cage in the forest doesn't mean you're turning into Robin Hood. Because you're just in it for the loot, right? Well, maybe not. In Rogue Soul 2, the second installment of the jump and run action series by Soul Studio Games, you want treasure and lots of it. But just maybe you'll become a hero along the way. Use the [arrow] keys to move and jump, [Z] to slide, and [X] to throw collected projectiles at your enemies. Your goal is to make it to the end of each level alive. You need fast reflexes to dodge, jump, or attack what's coming, so if you stay too close to the front of the screen, you could be dead before you know what happened. Collect cash, called soulons, and other treasures throughout the levels to purchase upgrades for your character to make survival easier. These include such things as starting with projectiles, better armor, and a chance to dodge enemy attacks. Different goals are listed before each stage. Accomplish these and you'll be awarded stars which can be used to buy skins to change your look. Get all these in the shops from the map screen, where you can also check out the soulbook which has information on your enemies. 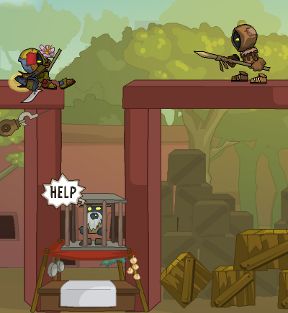 You can play levels as many times as you like to achieve stars or to grind for cash if you need an upgrade. The levels are somewhat randomized, making replaying them more than just memorizing the layout. Also keep an eye out for flowers. If you can deliver a flower to the fair maiden, she'll reward you with a power-up to help you on your way. As if all of this plus a variety of enemies, boss fights, and some great art and music isn't enough, Rogue Soul 2 also offers challenge levels. These consist of differing goals, mostly involving collecting things, or killing enemies, and are a great way to earn extra soulons and stars. As with the first game, when you get into the flow, you really feel unstoppable. This second installment is more fleshed out, and offers a lot more replayability. And though you'll have the levels where it seems like you fall into the same pit 50 times before you pass it, when you do finally go all Ezio across the screen, it's immensely satisfying.

Pretty fun! Not quite the same as it's predecessor, the split into definite levels means that there's more of a save system than a continue system, which is good. It's a bit easier in my opinions, since double jumps and parachutes can be used as much as you'd like now, but I like the fact that you can now buy power ups that last. The boss battles feel a little unintuitive, the sudden jump from running to fighting is hard to get the hang of. I wish that the boss battles were separate levels on their own though, because I've had to replay certain levels lots of times because the boss battle at the end is hard and you only get three goes at the boss battle before completely failing the level

Got 61 today YES!!! slope game of slopex is hard

Forgotten Hill The Wardrobe - Chapter 3 - Together Once More

5,930 Views
5 Comments
chrpa— Jayisgames needs your help to continue providing quality content. Click for details FM Studios is back with the third chapter of spin-off series from Forgotten Hill...at a different time in a different place, the wardrobe showed up again. In a...  ...