On the surface, Cellar Door Games' indie action roguelike game Rogue Legacy is simple. You control a hero trying to navigate a deadly, ever-changing castle with the [arrow] keys, jumping with [S] and slashing with [D], and try not to die. But the twist isn't that you will die, although that's definitely a certainty. The twist is that when you do, you'll be able to keep playing as the child of that hero in an effort to best the castle for good... and those children might be born with a variety of real life conditions. Color blindness, dwarfism, even irritable bowel syndrome are just the tip of the iceberg. Some do nothing other than change the way you view the world, while others may have a big impact on how you play. But who decides what's a disadvantage anyway, and who says anyone can't be a hero? 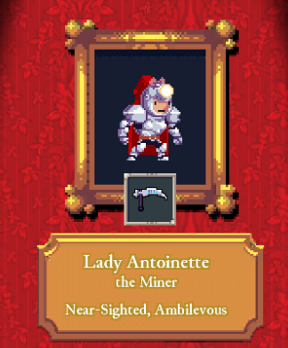 The majority of your time will be spent adventuring through the castle, trying to uncover its secrets and get past its many bosses. Once you die, that's that, and you'll be given the opportunity to pick from one of three potential heirs to resume playing... though the castle's interior will be completely different. Initially, you can expect to die. A lot. But as you gather coins, you can begin expanding your manor in a variety of ways to help you. You can pay for upgrades to strength and class abilities, or even entirely new classes, and new characters like the blacksmith or architect, whose abilities can make you even stronger.

Naturally, paying for all this beneficial interior decorating is expensive. As a result, you can expect to do a lot of grinding, which here means dying a whole bunch since you can only spend gold after you're dead (who says you can't take it with you?) and any gold your new heir tries to carry back into the castle will be confiscated by its ghostly gatekeeper. 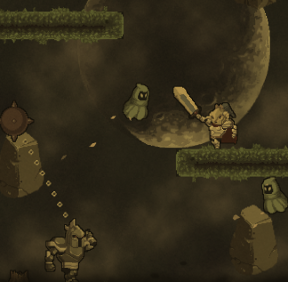 Analysis: With its demand for reflexes and sadistic room design, Rogue Legacy isn't the game for people who like their roguelikes slow and turnbased. You're going to die a lot, and that sort of forced failure before glory won't sit well with everyone. Luckily, the castle's ever-changing interior means you'll rarely feel like you're trudging back through the same thing twice, and the simple control scheme is something anyone can pick up... though mastering it is a different matter. Though the game will allow you to customise your keys, it won't allow you to use any controller other than an Xbox one, which is a bit of a bummer. Almost as big of a bummer as those frustrating pads that have to be opened with a downward sword-strike in midair that are often used as platforms.

It's a game that demands a lot from you, and the myriad of enemies, obstacles, and traps crammed in most rooms feels punishing to say the least. Recovery items are hard to come by, and you'll need to do a lot of grinding to beef up your characters to be able to handle most of what the game throws at them. Certain character traits can also dramatically change how you play. It could be as simple as the charming sepia-toned hue the nostalgia trait paints everything, but it could also be the frustratingly large target having Gigantism turns you into. Oh, and don't think you can just avoid choosing any differently-abled heirs, since before long everyone has something, and speaking of which... 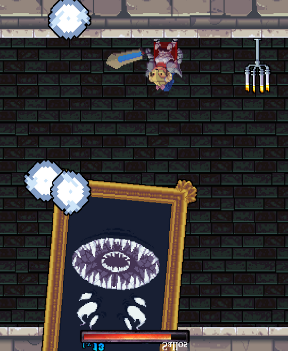 Ultimately, Rogue Legacy's approach to genetic differences is going to be something you'll have to make up your own mind how to feel about, and different life experiences and perspectives means everyone has the right to feel their own way. In a lot of ways, however, its inclusion of characters like this feels important, since how often do "disabled" people ever feature in games at all, much less in the starring role? How do you decide what's more insensitive... implementing a disability in a game, or ignoring that they exist altogether? The screenshot here, for example, is not a mistake but what happens when you get a character who suffers from vertigo. Is that offensive? What about when the game mimics the same near-sightedness I suffer from by making everything around your character nauseatingly blurry?

That, of course, is purely a matter of personal choice and opinion. As far as its gameplay goes, however, Rogue Legacy is at the same time both exceedingly difficult in the way that makes me wonder if I insulted the developer in a former life, and yet also exceedingly addicting. It's filled with surprises and challenges that will keep you coming back for more no matter how hard it knocks you down. It looks beautiful too, with detailed and vibrant pixel art that changes in new and unexpected ways depending on who you're playing as, and the whole presentation, gameplay included, makes me feel like I'm playing something from the SNES-era... with teeth. Though certain aspects of it are bound to be polarising, any action fan with a fondness for challenge will still want to make a date with the demo at the very least. Rogue Legacy is brutal, but clever, and however you feel they handled the inclusion of everything from physical disabilities to tongue-in-cheek sexuality, I'd hope we can all agree that inclusion in general for players of all types is something we could use a bit more of from games in the future.

Windows:
Download the demo Order the full version (via GOG)

Good review :)
I got addicted to the demo a few weeks ago, bought everything I could, maximized everything etc. I still haven't bought the full version yet though.

I just bought this game, and I must say I'm fairly disappointed. The game is not so much difficult as it is tedious. My biggest beef is your ability to attack: it is insanely hard to hit something above or below you. Likewise, turning to strike something immediately behind you causes you to turn into the enemy and take damage. Maybe half of the damage I take is from moving (or dodging) into an enemy I can't hit.

All this game has really successfully done is make me appreciate certain aspects of other games.

Sorry, Brian. Maybe you should have checked out the demo first to make sure it was your taste. :) Personally, I feel the classic approach to gameplay mechanics is the whole point of it, and spells and knowing when to duck and run meant I could handle enemies from any angle.

@BrianZuro, The game is supposed to be unfair. It's a throwback to the classic rpgs and adventures.