Rogue Horse! Rogue Horse! Rogue Horse! He's Rogue! And while he may not lead the Evil League of Evil, he is the titular star of this procedurally-generated, chess-based puzzle game by RatoLibre1, a semi-sequel to his well-received Horse Jump. Rogue Horse moves like a knight on the grid of each procedurally-generated level. Which is to say two spaces forward and one over, or vice-versa (an "L"), with the ability to "leap" other pieces. Every time you make a move the blue circle by clicking the mouse, the enemy "locks" on the board will move in the direction they're pointing, or, if they are facing a wall, stay on the same square as they turn around. They will not travel forward if another piece blocks their way. 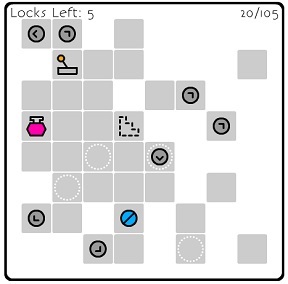 Each level requires you to "capture" a certain number of the locks to open up the door to the next one. Some levels will also require you to land on switch-spaces to open the door. In the upper-right corner is your maximum number of moves. The game ends when you reach that amount, but each level also contains a potion which will add moves to your total. Beat the higher number of levels in the fewest moves to get a high score. For something based around a game with such codified rules, Rogue Horse could use a better explanation of its own. Many players will probably need a practice run. Still, the minimalist graphics are inviting for a game with such originality, and improving one's strategy over time is quite enjoyable (Note that this claim is dependent on me ever actually making it through seven levels in one round. Gah.) Would fans of chess or spatial logic be able to forgive themselves for giving Rogue Horse a pass? In a word: neigh!