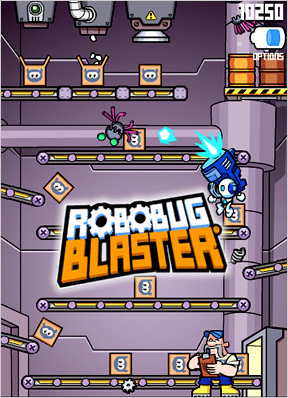 Word of the Best of 2005 compilation is spreading around the world, far and wide, with the voting page receiving a tremendous influx of visitors from Europe—particularly Brussels, Belgium and Amsterdam, The Netherlands. And probably due to this new traffic, I have received word from Karel of inslag.com, maker of fine Web games and Web sites from North Holland in The Netherlands, about a brand new Flash game they created for Demion Online.

Robobug Blaster is a gorgeous platform shooter with an unusal vertical orientation. The object of the game is to protect the cargo boxes, as they travel from top to bottom along the conveyor belts, from the cargo-hungry robobugs. The robobugs will latch onto a box and damage it quickly, so fast action is required to navigate the entire system and keep the path clear.

Control is with the keyboard: use the arrow keys to navigate Roboi left, right, up (jump) and down. Double-jump by pressing the up arrow twice in succession. Press the space bar to fire your extremely large pulse cannon. The weapon will automatically target the little buggers very nicely, thus making firing simple as facing or jumping in the general direction of a bug and pressing the space bar.

Each level sends a set number of cargo boxes down the belts for you to protect. A target goal is given at the start of each level indicating the percentage of boxes that must be saved. If you fail to meet the goal, or if you lose all your 'health juice', the game ends.

Points are scored for each bug killed and for the extra chips and bolts they leave behind. Sometimes the bugs will leave behind valuable cans of health juice; get those while you can, because they disappear and they don't come often.

Analysis: The game possesses a very appealing commercial feel due to the exceptional artistic talents of Vincent van de Wetering (a.k.a. VinzEnd). The graphics are cute and the animations of each character are simple and yet expressive, and very well-done. I especially liked the detail of the quality control man that checks each box for damage.

The idea of protecting the cargo from the bugs is engaging from the start and helps to create a frantic mood that is well-suited to the fast-action of the game. The auto-targeting of the oversized weapon is the single most important feature that makes the gameplay here lots of fun. Click.

hey, nice game, except i suck at these kinds of games though :(

Nice game, nice gaming feeling into it. The drawing are cool

Its nice how many things can be blown up. And also how the stuff you shoot does not simply disappear, but leave pieces flying everywhere.

Neat game!! Quite hard though... I can't go further than the 3rd level. The "blow up everything" barrel is extremely useful. I just love these sort of games.
Keep up the good work jay!

Nice little game.
Not much of a fan of shooters but this one was actually a fun one.

Ow,and I just found this blog a couple of days ago...Awesome work you do here jay!
/bookmarked

Yes, I agree, Tonypa. The effects are very gratifying. I should have mentioned that in the review.

Frankrod - the game is very challenging. I don't think I even made it to the 3rd level(!) The authors told me that if I hold down V and I at the title screen while clicking play, I can see the end credits without having to finish. =D

I figured there already are enough English sites that offer freeware reviews so I do'nt think that will be happening any time soon. =)

And except for the header, the design is from BrokenKode .

my best score so far has been 40250 after having one too many boxes destroyed on the 3rd level. :(

"Frankrod - the game is very challenging. I don't think I even made it to the 3rd level(!) The authors told me that if I hold down V and I at the title screen while clicking play, I can see the end credits without having to finish. =D"

HUSH JAY! That was suppossed to be a secret! ;-)

Well, I got to level 4, so I guess that's some kind of achievement :)

FYI the delivery guy on the bottom platform chucks wrenches at the bugs, so you don't need to guard that platform as much. And I found that holding space for rapidfire can be very helpful. I got about 75 000. Awesome site Jay, BTW I love the donation puzzle.

Wow! what a pretty game! i actually got to level 6! but it was really hard and i gave up. still fun though. happy new year jay!

You can get a cute kiddyphone there though!

KT - I fixed the link that changed, and it does indeed work, try it for yourself and see. I imagine they were just moving things around and it took a little time for the digital dust to settle. ;) Cheers for the heads-up about it, though. =)

Now how did you do that? :) I tried everything in my power to get to a working link, but nada. Well, nevermind, I got there now.
Too bad it's not my kind of game after all this trouble. ;)

Good to know us dutchies are being appreciated! =)

The links weren't working for me, but I did find it at http://www.inslag.com/robobug/robobug.php. Interesting game!

Thanks! I've updated the links accordingly. =)

Has anyone ever player Vector Man for the Sega Genisis? The controls, weapons, jumps, and even some sound effects were directly from that game. Because I was used to that game I managed level 23 (or higher, I stopped paying attention at 23).

Also if you want faster control press down to automaticly fall through conveyer belts.

Also Also if the bug is on the bottom conveyer the manager will deliver a swift blow that will "wrench" away all their life in one hit.