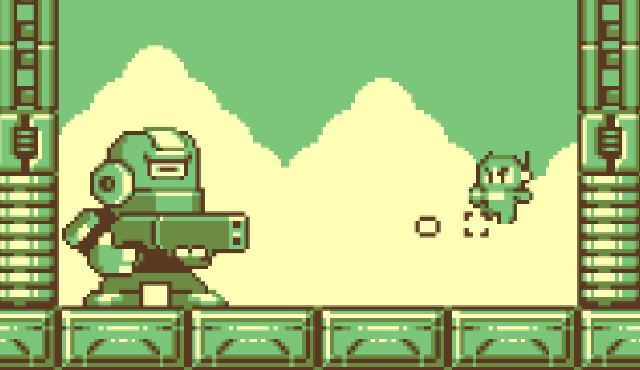 Made for the GBJAM 6 by Daniel Moreno, RoboBlaster is a very bit tribute to the GameBoy version of MegaMan. The little RoboBlaster acts, handles and shoot exactly like MegaMan which, in my opnion, makes it very familiar and very cute. The game acts like a very solid MegaMan clone, and I honestly think that when the dev puts more time in this project (this game was made in 4 days) he would have a solid full game upon his hands.

You move with the arrow keys, shoot your blaster with S and jump with A, and these controls handle very smooth and very well. If you want to dash (which I never needed to do), you can press Down + A. Overall, the themening, soundtrack and platformer are done very well. The game itself seems like it could've actually be a game found on a 50 in 1 game cartridge you had in the 90's, not a fully licensed game by Nintendo, but surely a great mockup of a fan.

But Poofy, aren't there any flaws on this nostalgia tickling platformer you like so much? Yes, there's one. Well.. actually 3, since there's 3 bosses in this game. The bosses, even thought working perfectly well for a game made in 4 days, lack any difficulty at all. Once you've pinpointed the pattern, stand in a corner, and occasionally move to the other one, the bosses are very easily defeated without loss of health, or any requirement of skill needed. If you look past that flaw, the game is a very entertaining but short timewaster, which I really enjoyed playing. I hope the developer will continue working on games like this, since he might be able to get a wonderful future in the games industry if he does.