You've probably heard that "all roads lead to Rome". What you didn't count on is that you'd have to build them all! In Roads of Rome III, a building-centric time management simulation from Whiterra, you take orders from the Caesar himself and set out to repair damage to the empire caused by barbarians. It's no easy task, and you're not really in the mood to do it, but it's your duty, and one never questions the Caesar! 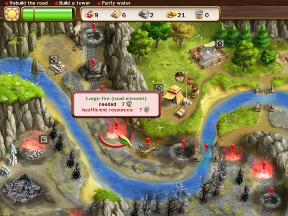 Following in the footsteps of previous Roads of Rome games and sticking firmly to the road building genre (which includes titles like My Kingdom for the Princess), Roads of Rome III puts you in charge of a small band of workers who must collect resources and complete tasks in order to reach the goal of each level. Harvesting wood and gathering food are the two most basic jobs you'll undertake, and you get the former from trees and the latter from berry bushes. Each choice you make both brings in resources and costs resources, though, so you have to choose your moves wisely or else you'll be stuck sitting waiting for berry bushes to regenerate!

After a few levels, you get to upgrade your resources to more civilized structures. Farms provide food, sawmills timber, quarries stone, and so on. In order to get them up and running, you'll need to spend a hefty amount of resources, but then all you need to do is pick up the product whenever it appears. In Roads of Rome III, pumping stations provide buckets of water that allow you to put out fires, useful for clearing the road as well as dousing buildings you need to repair.

Speaking of roads, opening the way to the next level is always your most basic goal, but there are plenty of other tasks you must undertake along the way. Levels last between five and ten minutes on average, with a timer slowly ticking down, just waiting to take away that expert bonus score for a quick completion. Keep your calm, work logically, and before you know it, the road will be clear, your workers fed, and your pockets stuffed with resources. 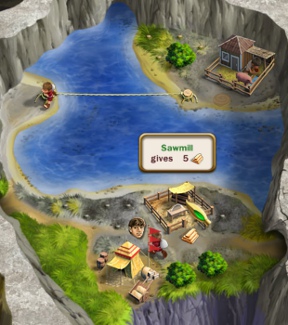 Analysis: The formula in Roads of Rome III is basically the same as the other time management/building games, keeping the balance of resource needs and resource gains carefully tuned to make sure you're never twiddling your thumbs. As mentioned, there are plenty of things to do in each level of the game, some of which you won't need to accomplish in order to complete the level. You'll want to, of course, as this is the sort of game that compels you to be a completionist!

The same frustration you'll have with most building games is still present in Roads of Rome III: no queueing system. You can't assign workers jobs until they've completed their current task, which is a minor annoyance when you're trying to, you know, put out fires, frighten away barbarians, and harvest the stone you need to fix potholes. It doesn't seem to be as much of an issue in this game as others, however, so for the most part, you're safe! Also, Roads of Rome III doesn't reinvent the building genre, so don't expect too many surprises in your journey to rebuild the empire.

No real surprises for the series or for the genre, but then again, when you've got something right, you probably shouldn't mess with it too much. Roads of Rome III provides a smart, addictive, challenging experience with multiple levels of difficulty and plenty of stages to keep you busy for days on end, more if you're hooked enough to try for expert scores!

having some trouble getting expert score on ep.2 level 10. Any suggestions?