Rise of the Blobs

Rise of the Blobs is a colorful, creative, and fruity puzzle matching game from Robot Invader, the studio behind Wind-up Knight. In a world where marshmallows talk and pieces of fruit are weapons, you have the honor of saving the corn syrupy folk in an endless arcade game that isn't afraid to crank up the speed. In a welcome change from the norm, you must manage a three dimensional puzzle board that rotates at the touch of your finger, meaning you won't always be able to see what those pesky blobs are up to! 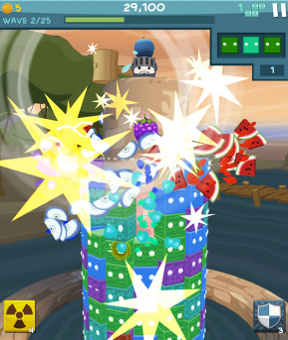 As Marsh Mal the marshmallow helpfully informs you at the beginning of the game, the world is being overrun with Blobs. They're pretty easy to stop, though, since they have an uncanny affection for fruit. Mal stands atop a pillar you can rotate by dragging left or right on the screen. Blobs slowly rise up and threaten Mal's safety, but he's armed with a variety of colored fruits he tosses down one by one. By rotating the pillar you can line up groups of like-colored blobs and, as soon as they eat a fruit, pop them by the bunch with a quick tap. It all sounds pretty simple, but when you factor in the rapidly increasing speeds and the fact that you can't see the entire arrangement of blobs at once, you've got quite the game on your hands.

Rounds in Rise of the Blobs last until the blobs pile high enough to reach Mal. Afterwards, you get to take inventory of the missions you were charged with to see if you get a bonus prize, tally up the coins you earned, and head into the in-game store to do some shopping. Power-ups can be earned or bought via in-app purchases and range from simple coconut bombs and time bonuses to skull smashers, coin doublers and panic buttons. Enough to let you survive just a little bit longer the next time you play.

With four unique modes at the time of review (another one is coming soon!), Rise of the Blobs definitely has something for everyone.The difficulty can be a little high, what with dozens of blobs frantically spawning out of the goop and Mal throwing fruit down like some sort of crazed Donkey Kong. But you quickly acclimate to the challenge and, thanks in part to the gorgeous graphics, fall in love with each time you fire it up.

Rise of the Blobs
(Android)