Okay, let's cut to the chase: Ripple Dot Zero is an action-platformer by Swedish developers Pixeltruss, and it is the objective opinion of this reviewer that it is totally friggin' sweet. First of all, it stars a penguin with a sword, and he uses that sword to blow up all these Cthulhus and ED-209s. Sometimes he also has a jetpack and a crazy exploding yo-yo thing that would make even Ness blush. There's all sorts of dystopia happening, and you have to rescue your penguin friends from each level, and seriously, if you saw an ad for this thing in one of the issues of GamePro that you got a subscription for as a birthday present, you'd have been begging to plunk down the cash for it. Grab some Ecto-Cooler and Cheetos Paws and get ready to dive into a game like it's due back to Hollywood Video the next day. 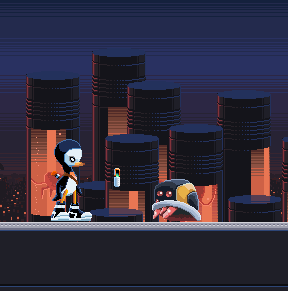 Once wakened from your cryogenic sleep, use the [arrow keys] to look and move around and [X] or the [spacebar] to jump or use your jetpack once you find it. You will come across data-tablets that can be read by hitting [Enter]. Smash boxes and enemies with your sword with [Z] or [Ctrl]. You will use these same keys when you pick up other weapons. The goal of each level is to make it to the exit teleporter, while avoiding enemies and collecting penguin power pills. Collect enough pills in a level (as shown by the gauge on the lower right), and you will unlock the bonus round where you'll have a chance to rescue one of your fellow penguin buddies. Complete all twenty levels and bonus rounds, beat the bosses, and show the world that penguins can fly!

Analysis: Ripple Dot Zero evokes that time, that glorious time, in the mid-90s where any anthropomorphic-mascot-with-an-attitude could get themselves a half-decent platform game filled to the brim with all manner of Blast Processing. Of course, Ripple Dot Zero is much more than half-decent. It's not quite Sonic the Hedgehog 2, but it's ahead of Socket, Aero, and that Bubsy the Bobcat punk. Let's just call it even with Jazz Jackrabbit and move on. Admittedly, the penguin protagonist of Ripple Dark Zero doesn't even have that much attitude, and his design is a little bland. Still, the most important aspects of the genre are taken care of. If you've played any of those aforementioned works, you probably know what you're in for: wide expansive levels to explore, secrets galore to uncover, some killer sprite work, and an awesome chiptune soundtrack that will probably be remixed a dozen times over before all is said and done. 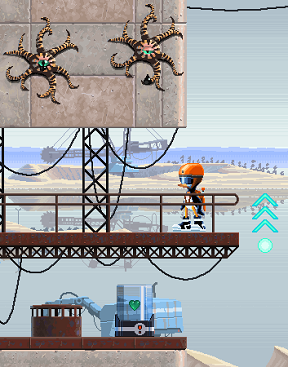 Much like the Cactus McCoy series, Ripple Dot Zero has a certain heft to it that is very satisfying. The plot is intriguing but only minimal: the real star of the show is the world the developer has created, and it's just the thing to happily sink into, one half-hour at a time. Indeed, the main drawbacks of the game have more to do with its presentation than content: a downloadable version with gamepad support and a high steady frame-rate would be just the thing to make an A into an A+. Of course, it's really hard to believe that this won't be a jumping off point for a stellar new penguin-based franchise... Pretty please?

One hates to build it up too much, as no work is without its flaws, but Ripple Dot Zero is really the kind of game that amazes you enough at the start that the nitpicks won't crawl into your mind until you finally take a break. It does something new with something familiar, and that is a hard balance to achieve indeed. Highly recommended.

Hate to break it to you, Tricky: They don't make Ecto-Cooler anymore...

I can't give an opinion just yet as I started playing now (and it crashed chrome too) but so far looks awesome! I am absolutely in love with the music.

I can't enjoy it though because I'm all depressed now. After a quick Google search I have only just learned what Ecto-cooler is and now I feel robbed. ROBBED! Curse you Australian country town upbringing!!! And Cheetos paws? Why have I only just heard of these? Stupid America and it's artificially coloured , sugar-coated, sodium rich, chocolate dipped, powdered cheesey, diabetes giving, stroke inducing magical yummy goodness.

Bonus level .04 is killing me. I've played it at least half a dozen times now and lost every time. On principle I refuse to proceed any further in the game until I've rescued that penguin!

Great game, but bug found:
In lab area .02, if you slice through the honeycomb boxes as you are encouraged to do, about halfway through under the platforms you just fall straight through the ground and die. :(

Love this game! Yes, flashbacks of sugary 90's gaming goodness is coursing through me now.

What gets it for me is the music. Simply amazing.

What's up with the weird secret tentacle monster in crater lake 1 that you can't actually get access to?

The music is brilliant. I finally managed to play this and I'm really happy with two particular features: full screen and control settings. I mention full screen because so many good browser games are less than what they can be because they are constrained to a small portion of a window.

I like the 'hedgehogs' reference at the beginning of the game.

Did I mention the music is brilliant? it is.

how do you get to the bonus levels?

I've got the full bonus meter on the second level but i dunno how to activate the meter. it just says when full will be teleported.

Ashiel:
When you finish the level you'll play the bonus before the next level :)

I'm so worried for this penguin with all these pills he's collecting. I just hope he gets help soon.

My biggest complaint is that the levels feel too big and open. I would have preferred some design a little closer to Sonic the Hedgehog where there are a couple of clear paths that reward the player for staying on the high road. As it stands, I wind up climbing up and down again looking for pills and powerups instead of focusing steadily on reaching the goal. Once you get a jetpack it gets worse, because you can backtrack and should in order to unlock the bonus stage. Perhaps the later levels change the design a bit more so there's more variety to the layout.

The powerup containers could also be more prominently marked. The tiny hearts and pills aren't really obvious unless you stop and look. Huge icons or eye-catching colors would really be the name of the game here. The goal might have been to keep it from looking to much like monitor boxes from Sonic, though.

The star rating at the end of the levels throws me off, but only because it really doesn't fit the 90's vibe the rest of the game has going. The whole stars thing seems like more of a late 2000's browser game convention and takes me out of the illusion. The game is also unclear regarding how it grades you, but since the focus is on rescuing those penguins I find myself ignoring the ratings anyway.

In every other way the game really does manage to achieve that feeling of a forgotten 90's classic.

I just love the 90s nostalgia. I'd like to see more 16-bit retro games. Everyone's all about the 8-bit these days.

What I like about this is that even though it clings to the 90s nostalgia thing, it's not imposing on itself the same restrictions. I see this happening over and over again with games, like using 16 bit music and low res graphics. I like these too but I don't see why not make a game with the technology that we have today and only use the actual game design from before, like this one did. It shows how a successful design style doesn't get old.

I am just getting an empty black box on this one today. I was playing allright a few days ago. Is anyone else having the same problem.

I am wondering if it is something to do with the Firefox update.

Should have checked first, yes it is running on Chrome - but of course no saved game.

The heart containers I collect carry over into other levels, but they go away when I close the game and come back. That's really annoying.

Also, hitting the key for full-screen mode does nothing for me, and the "new game" option doesn't change to "continue game" when I come back, even though it does continue to old game. Those are just quibbles though.

Can someone help me find all secrets in The Oxygen Plant Area2?

I cannot, for the life of me, rescue Ripple 03 (Crater Lake Area 1). Is there a jetpack somewhere in the bonus level? And if so, where is it?

Somebody can post how many pills are in each level? I can't complete the secund level at 100%, though I found all the secrets and look everywhere. I got 428 pills. (If you have an idea of what I have forgot, tell me).
The first level has 193 pills.

So, just found out something really cool.

Don't worry about not rescuing Ripples. You won't have to go through the entire level again just to get to the bonus level, and here's why.

There's a secret exit in Terrarium 2 that leads to a strange hidden level. It has nothing to collect and is just a series of rising platforms, with teleporters on each side. Each of these will lead you to a Bonus Level. If one is inactive, it's because you completed it and rescued that Ripple. This saves you a LOT of time when rescuing Ripples, and believe me when I say it's worth it because:

Rescuing all 8 Ripples gives you the option of a permanent flight suit. It's a black recolor of the orange invincible flight suit, but it doesn't offer the same protection. You will still take damage. but it makes getting secrets a LOT easier.

And one more thing.

This is about that permanent flight suit I mentioned.

You sure you wanna know now instead of finding out yourself?

IT NEVER RUNS OUT OF FUEL! Ever! You can keep flying with this thing! Also, if you get the invincible suit, it doesn't change to orange, but you will still sparkle like you just touched a Starman.

Somebody knows how get past the ending at the terrarium zone 2? I see pills but didn't find a way to get there.

Hey, you forgot the "Badlands" hidden level, there are 382 pills.