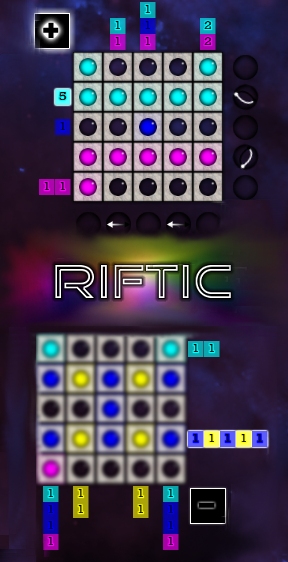 Each stage in Riftic is solved by filling in two picross-like grids at the same time, such that each grids' conditions are filled. If you're not familiar with color picross puzzles (see Conceptis Puzzles and Griddlers for examples), here's a quick rundown of how they work: In some of the rows and colums of the grid, you'll notice a series of numbers on the outside border. Each number tells you how many consecutive spaces are to be filled with that color. Two differently-colored fields in the same row can be filled in next to each other, but two similarly-colored fields have to have at least one empty space between them. By using the clues in the rows and columns together, the solution to the puzzle can be found, usually a picture. The main difference in this game is that if a row or column has no numbers attached to it, it's not necessarily empty; it simply means you have to use other clues to figure out what goes in those spaces.

As mentioned before, you're solving two grids at once (a "positive" grid and a "negative" grid), but the clues suggest that you'll be creating two different grids. This is where a bit of a twist comes in (and surprisingly, this "twist" actually does involve rotation). In the top-right corner, you'll find "portal agents", which, when applied to a row or column, can change the colors in it to one space clockwise on the given color wheel, one space counter-clockwise, or on the opposite side. By setting portal agents, one grid can be manipulated to look like the other, as well as help you figure out where you need to put the next colored box.

Analysis: If you're already a picross fan, Riftic is a clever variation on the puzzle you enjoy. Working back and forth between both grids to solve each puzzle is a challenging twist. If you're not familiar with picross already, this game might be a bit more of a challenge to pick up, but then again, the in-game tutorial does a much better job of summarizing basic rules of picross puzzles than I can. Regardless of your experience level, the smaller levels you start out with are good for getting you into the feel of this game, and as you start to figure out more strategies for solving puzzles, the difficulty increases just the right amount to match.

One of the confusing bits about this game is solving using both grids. It's wholly possible to solve every grid in this game without switching the controls back and forth between grids, although it'll take a bit of mental agility to remember some markings until you're able to work with them. If you do prefer to switch back and forth, keep in mind that when placing portal agents, the portals will change the contents of the opposite grid, even if you've made all of the portal switches in the other direction so far.

Once you get the hang of how the puzzles work, Riftic is a clever challenge that's a fun way to kill off a lazy afternoon. With 36 double-grids to solve, it won't be long before you're a master of poking an alien on the other side of the universe in the head.

I loved this. I'm not very good at picross but I found that I could do this pretty easily.

It's a nice riff on picross.

If you don't get the solution they are looking for it doesn't seem to count. Or maybe I am misunderstanding the rules.

Nice puzzles just my kind of logic. But I'm stuck on puzzle 2-1. Could someone put up a solution to it. thanks.

Pete, you are probably misunderstanding the rules in the same way I did at first. They declare that it doesn't matter what goes in squares that aren't specifically defined, but that's not entirely true. It doesn't matter what goes in squares whose *row or column* is undefined. ie, if you have a column with a purple 1 and a green 2, then it *is* wrong to have a blue dot anywhere on that column - and that's information you can and should use to your advantage. In fact, it becomes *very* useful to fill in your "blank" spots with X's when you can.

Oh, I also just discovered this (and maybe it's what you're running into): it actually won't recognize that the positive half is complete if you've found a way to complete it without having your dots in the right places for the negative half. And presumably vice versa. There might be other situations where it doesn't recognize a partial victory, but so far I haven't seen any situations where there are multiple possible solutions for both sides, so I don't know for sure if it would recognize alternate solutions or not. (Level 4-2 has such a situation: if you've got everything filled out but the top left 2x2, then you can solve the positive without having it recognized).

I loved this. I'm not very good at picross but I found that I could do this pretty easily.

I'd really be into this game if I wasn't colourblind. The trouble is with yellow/green and blue/purple.

It'd really help if, for example, the yellow balls have a square in them, the green balls a circle, the blue balls a triangle, the purple balls an upside-down triangle, and think of some neat shape for the other two colours. Same for the clues. Or something with patterns. Polka-dots, horizontal stripes, vertical stripes, checkered, whatever.

Thanks Pete, the way you made the solution it was sill a bit of a challenge, placing the portal agendas.

This game is excellent! I misunderstood the rules Parmeisan did when I started, but once I read their clarification, it clicked and I'm having a blast with it now. I'm about 2/3 through and already wish there were more levels.

If there is a sequel (and I hope there is, and I hope the game designers are reading this), I have one suggestion: I would LOVE a way of marking "This will need a color, but I don't know what yet." Using the X to eliminate positions is essential, but I also often wanted a gray/white button to mark that I'd determined a spot needed to be filled, but had not yet figured out which color to put there.

But other than that, great game and five Jayshrooms from me!

I used to be able to play Riftic in Chrome on my Mac, but now it crashes the tab.