Warning: This game contains flashing elements which may trigger photosensitive seizures in people with epilepsy. Also, certain game events may cause the volume to suddenly increase for short periods of time.

What happens when you combine a classic arcade game like Pac-Man with a modern smash hit like Flappy Bird? You get fatal errors out the wazoo, that's what. As a mustachioed Blinky attempts to take advantage of the mishap and monetize your mashup with paywalls, you've got to do all you can to stay alive in Ridiculous Glitching by Firepunchd. In this glitch-style clone (a la Rom Check Fail) made for Flappyjam (and a smidge late for Candyjam), you only need the [W] key to give your bir—erm, Pac-Man a bit of upward acceleration to fly through the paywall obstacles, but there's more to this game than meets the eye. 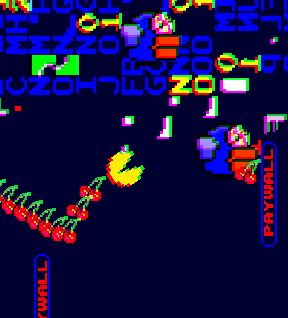 You gain one point for each floating fruit you snag, but grabbing a power pellet turns some of the Blinkies on the top and bottom edges into vulnerable Flappy Birds. Each of those that you grab are worth three points, but you also run the risk of hitting an untransformed Blinky or the edge of the game field (which isn't clearly defined). This scoring twist turns the simple (well, "simple") avoidance game into a clever collection challenge. Survival is still a tricky task in any case, especially when you pass through fields that distort the screen and when the barriers start moving!

If you're looking for some multiplayer action, up to four players can battle for high score domination simultaneously, using [up], [G], and [K] for additional players, and they can still attack each other from the edges even after they've been eliminated from play. If you play long enough, you might discover how to unlock a faster hardcore mode (there are at least two ways!). One downside is that the turnaround from losing one game to starting the next could stand to be a hair shorter, but if a major complaint of a game is "I want more, NAO," the devs are doing something right. While Ridiculous Glitching is as basic as its high-difficulty flappy predecessor, it presents enough quirks through scoring and gameplay variations to keep you twitching for just one more play.

Ugh I wish this were a manually controlled avoidance game or anything other than another flappy bird clone. The concept and glitchiness is a pretty neat aesthetic but the flappy bird gameplay is so tiresome and unfun that it ruins it.

Agree 100%. Interesting graphics, but I'm not sure the world needs yet another flappy bird clone. (I'm not sure it needed the first one, actually.)

This is a terrible game made out of great ideas. If the control didn't completely suck as a result of being copied from another game where the control sucks, I think it would've been a pretty good game.

“Created for Flappyjam” - it's the reason why the game is a flappy bird clone.

The game itself is pretty fun and isn't exactly a flappy clone :) but I don't like one thing about it. After few plays it doesn't let me come back to the game and just stays at the glitched screen.