The magic boots in Reverse Boots, Denis Vasilev's new platform game, are a wee bit more utilitarian than the last magic problem-solving footwear I've encountered. Your goal is to collect the key (and bonus stars, if you're daring) and then get to the door on each level of the dragon's tower. Use the [arrow] keys to move, and [up] to jump. The trick of the boots is that whenever you jump, the world changes around you. Blocks move and rotate, spikes and fire-breathing totems change direction. Oh, and this happens every time you jump, whether you want it to or not. 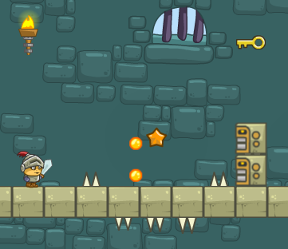 Reverse Boots is an interesting take on the "run and jump and avoid fireballs" genre of platformer. In this case, you don't neutralize threats so much as you move them. The challenge isn't always making that perfectly-timed leap, but making sure you'll be safe when you get there. The first few levels are straightforward enough, but just when I thought I had the spikes and moving platforms figured out, there were spikes on moving platforms and I had to rethink my strategy. The new challenges are introduced at a decent rate, so there's always something new to figure out without being overwhelmed. The deaths are a bit grisly in an over-the-top cartoony sort of way (though not overly explicit), and it would be nice to control the height of my jumps, but in the end, Reverse Boots is an engaging set of puzzles. Do avoid the lava, though: these boots might be magical, but they're not that magical.

Oh thank the Gods brave Knight! You saved my life! I owe you a debt of gratitude for plucking me from the jaws of death. Those wolves would surely have made a fine meal of me. What's that? Your Princess girlfriend has been kidnapped by a dragon? That's awful! Please... take these magic boots to help you in your quest. What do they do you ask? Well...

THEY SCREW WITH YOUR LIFE AND MAKE EVERYTHING MORE DIFFICULT!

Expect a lot of jumping on the spot and dying. Yeah... turns out they don't help at all. I'm not a wizard, I'm an ungrateful douche nozzle.

Game wasn't really that difficult until the later levels, but then it was just about timing a couple jumps. At least the star rating worked....