As someone with a deep and abiding terror of large bodies of water and a healthy fear of the dark, playing Lazy Monday Games' indie horror puzzle platformer Reveal the Deep, also available on Android with iOS coming soon, was maybe not the best idea. You control a little deep sea diver, exploring a creaking, groaning, sunken hulk, with your only illumination coming from your diving helmet. If you're playing on Android, as I was, then you swipe left or right to start moving in that direction, tap anywhere to stop, and swipe down and up to crouch and jump, respectively. Double-tapping anywhere turns your light on and off, which is not just unnerving, but a key mechanic. See, some areas don't just look different with your light off... they are different, and swapping back and forth between the two can help you move forward. Deeper... 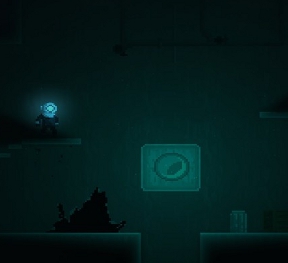 Reveal the Deep bills itself as a short game, and it sort of is, though for the princely sum of a dollar ($1.49USD on Android), completing the three nicely sized levels in an hour or so hardly seems unfair. The emphasis here is on exploration and immersing yourself in the excellent gloomy atmosphere, figuring out how to get past obstacles and learning the story of the ship as you go. The whole experience is a tense one, shrouded in a surreal sort of mystery, and you'll find journal entries left behind by the passengers if you explore. The light mechanic is a little clunky on Android, since it seems picky about what it accepts as a double-tap, but in gameplay it works well both as a way to solve puzzles by changing parts of the terrain, and by making you question everything you see. Most of the puzzles revolve around pushing crates (or activating floating ones!) to help you reach places or knowing where to use your light mechanic, and the backtracking can get a little tedious given that your character moves juuuuuuust slowly enough to be annoying when you're trying to cover long distances... especially since the game only saves between levels. The controls on Android are simple, but the stop-and-start movement in lieu of a control pad can make it easy to overshoot platforms. You're never given any real instruction or direction beyond the basic controls, so often you need to experiment with your environment to see what works. At times, this adds a great sense of wonder as you discover the way different objects or creatures can be used to your advantage, especially in later chapters, but at other times when you're left to wander aimlessly or resort to trial and error, you may wish the game wasn't quite so silent on the matter. Help me, game! I'm lost, what do I do? The game looks back, smiles smugly, strokes its chin... mysteriously. 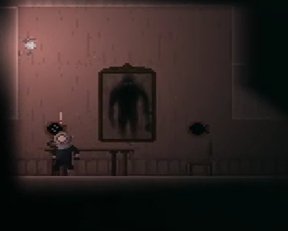 Still, Reveal the Deep makes the most of its setting and tools to suck you in, rewarding players who really explore everywhere with a plethora of notes that fill in the history of its ship and its passengers. While a lot of this is fairly standard ("We're on a voyage! We're exploring things! What could possibly go wrong? Aieeee!"), the game's fantastic pixel presentation doesn't skimp on the spooks. Reveal the Deep recommends playing with headphones, and the ambient sounds make it a perfect, nerve-wracking fit, while the play of light and shadow in the murky green depths paints a wonderfully decaying environment. The ending just sort of... happens... but Reveal the Deep doesn't overstay its welcome, making it the perfect size for spooking up part of your evening. As Lazy Monday Games' debut title, it's a stellar showing, and more than worth the itty-bitty price of admission for any fan of oppressive horror.