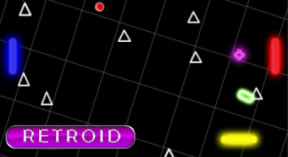 Trying to describe a game using splendiferous prose just seems so... right-brained-centric. How discriminatory! Thus, as a public service to all you left-brainers out there, I hereby present the mathematical description of Retroid, by developer Harrah:

Yes, you'll see flashes of your old buddy Pong, at least inasmuch as you use paddles to keep a ball from exiting the screen. Did I say ball? Sorry, I meant balltangle. Yep, it's got corners. Plus, you have to also worry about your balltangle falling off the bottom of the screen as well as the sides. Did I mention you have to do all of this while using Bob – that's your little purple atom – to scurry around collecting point boosters and powerdowns and avoiding trienemies? Yeesh! It's a multitasker's dreamworld!

There are four different modes of play, each with its own quirks, including soundtracks appropriate to each mode's specific level of freneticism. You start off with access to two Classic modes: Easy and Normal. Easy mode is a great place to start, as it will get you used to the controls and the scoring objectives without quite so many opportunities to die. The balltangle will drop onto a white forcefield that serves as a floor and start bouncing from side to side. Use the mouse to move the side paddles up and down to prevent the balltangle from exiting the screen. Eventually, the floor will fade away, and you'll have to control a third paddle to prevent the balltangle from dropping to the floor (except for Easy mode where the floor never disappears). That's one part of the game. The other part resembles any number of avoidance games – you have to keep Bob clear of the trienemies that soon begin to crowd the screen, while collecting point boosters and powerdowns. Tying both of these tasks to the movement of the mouse adds a unique dimension to the gameplay: often, these two tasks will be at odds with each other and you'll either have to let Bob take a hit or suffer the loss of your balltangle. It's almost always better to save the balltangle and leave Bob to the mercy of the trienemies. They only cause 7 damage each, whereas you lose 25 life for each lost balltangle.

Earning a B- or better on the Classic Normal mode unlocks Defusal mode. In the place of the trienemies are bombs that must be clicked before they explode – again, while continuing to keep the balltangle in play. Speed mode (unlocked with a B- or better in Defusal mode) gets rid of enemies altogether, but ramps up the balltangle velocity pretty quickly and also makes the balltangle cause damage when it hits Bob. As if that weren't enough, you also die instantly upon the loss of your balltangle!

Except for Speed mode, scoring for the different modes is basically the same – each time you hit the balltangle or collect a blue point booster, you get points and your points per hit increase. Having an active powerdown (red dot) in Classic mode gives you a temporary score multiplier at the expense of added difficulty. In Defuse mode, the multiplier increases automatically with time. For Speed mode, you simply accumulate points for surviving, and the longer you survive, the more quickly you accumulate them.

Analysis: Like Lt. Fly and the Spiders From Above last week, Retroid successfully merges two tasks so that you must pay attention to both simultaneously. However, rather than using scarcity of ammunition, Retroid links the controls for both tasks so they cannot act independently of each other, ensuring that they are both kept at the front of your concentration. Another nice balance is struck by the powerdown scoring multipliers – they make the game more difficult, but can greatly increase your scoring rate.

As for the production values, Retroid scores both hits and misses. The neo-arcade style graphics themselves look pretty sharp for the most part, but the overall design is a bit shoddy – a misaligned button, a too-busy end-game screen, etc. The musical selections reflect each mode's pace pretty nicely, but after a couple of times through Normal mode it dawned on me exactly which mid-90s alternative rock song I was hearing remade in an easy-listening style. I know that in the world of Flash games, original music is not always made a priority, and I did get a kick out of hearing this version of the song, but overall I think it added a sense of novelty that really was not needed and only detracted from an otherwise solid game.

A bit rough around the edges, (misaligned text on buttons, overly long endgame screen when you just want to try again) But still smooth play.

Graphics are cute and simple, I don't know about the sound, I wasn't listening to it..

I do have an older PC, and was warned, but a few times las gresulted in me missing the ball. Also moving the mouse off of the screen can be disastrous.

in my opinion the paddles could be a bit more forgiving, but... Still a good game overall.

this game looks like it COULD be fun, but it sucks if youre using a touchpad. i would definitely recommend using a mouse.

Sloth - I managed to unlock all the modes using my touchpad. Granted, it may have been easier to use a mouse, but it's not completely unplayable with just the pad.

...and the background just has to spin around because it's not hard enough already, I suppose?

once you get about 6000 points on normal protecting bob just gets impossible. Whats that actionscript button for?

oh god this game made me sick. That rotating background gave me a headache at about 2000 points, and made me want to hurl after 2500. Otherwise, it's a fairly good game, if only it wasn't sickness inducing.

The rotating background has got to go. Some people are most sensitive to this than others, but in those, it can really make them feel ill. The music in "Classic Mode" was cloying, and early on.

Other than that, the game is nice. I improved each retry, getting a B on my 5th (or was it 4th?) attempt, then B+ in the consequently unlocked "Defusal Mode", so the difficulty is probably well suited for casual gaming.

This game is really not very good. In fact, this is a bad game. It gets monotonous after 10 seconds on easy mode, the graphics are tiresome, the music atrocious... In fact, I can't believe anyone went back for a second play.

Okay, there is WAY too much introductory content in this game. I timed it from the first "Loading" message, until I was actually PLAYING the game, and it took a minute and a half. And this is on a blazing fast computer on a high speed connection.

WAY too much *stuff* for a casual game.

Okay, now this is weird. I just finished defuse mode with a score of around 8700 and got this: _level0.endgamemenu.yourrankmc.grade
I assume this means I ranked, which is cool, but there was no way of seeing said rank, or my actual grade which was probably around C-ish.

Good game, made me re-evaluate my pong abilities, still haven't gotten to speed mode, 4.5ish if I could. I guess I'm immune to the spinning background, the scvor thing got really annoying after 2 or 3 plays.

Yeah, I'm on a fairly new laptop with broadband and the game can't keep up with my mouse. *gameshow buzzer sound*