Having your city transformed into a retro video game doesn't sound so bad, if you ask us. Having multiple lives is a sweet deal, and you could recover from a sprained ankle just by eating a roast chicken! And for that matter, you could eat an entire roast chicken in a single sitting! But when there are alien invasions involved, things have a tendency to get less fun. So it's up to the heroes of Retroacan, by Pixcomp, to save their home turf from the alien army that's pixellated their world. With an arsenal of corn chips, tamales, and even an NES Zapper, they'll have a platform-hopping, monster-exploding adventure inspired by classic shooter games such as Contra. Choose from one of two characters to start, with four more waiting to be unlocked. You'll move with the [arrow] keys, and just like in a proper retro game, you only need two other buttons: [X] or [S] to jump, and [Z] or [A] to shoot. But how many of those classic games can say they contain rabbits that turn into helicopters, top hat-wearing frogs, and wacky inflatable arm-flailing tubemen? Retroacan bills itself as 80's-game pastiche, sure. But it's also a joyously weird, whimsical, and surreal little platform adventure that looks and plays like an explosion in a third grader's imagination. In a good way. 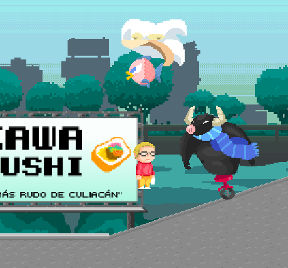 Okay, so the bright and cheerful color palette this game uses isn't precisely 8-bit standard. But it's hard to criticize the art for not being purely "retro" when its character and enemy designs are so awesomely wacky. Creatures such as mutant giraffes, and playable characters like a ham-chucking martial artist, perfectly capture the unfettered, cartoony spirit of early video games. Not surprisingly, Retroacan also makes use of several old-fashioned gameplay elements as well, such as not starting each stage with full health and only having three lives. Thankfully, these are blended with more modern sensibilities; running out of lives only sends you back to the start of the level, your continues are infinite, and there's a level map that lets you jump to any stage you've unlocked at any time. It's a surprisingly short little game; it's only fifteen levels long, with every fifth level being a boss fight.

The stages themselves also tend to be fairly brief. The platforming challenges within them are pared-down, and sometimes, they're too simple. Thee biggest challenge most jumps will pose is that it's not always clear what you can and cannot land on. But in shooters, the real star is the enemies. Retroacan is no exception. Not only do they look cool, they have a wide variety of attacks, behaviors, and weak spots, and require both reflexes and a decent amount of precision to take down. The later levels end up decently challenging because of the baddies, although sometimes you'll get pummeled by off-screen enemies firing projectiles. The three bosses are all big, dramatic, tricky, and defeating each leaves you with a sense of satisfaction. The game even has an optional challenge, to beat every boss with every playable character, and since every character has their own style of jump and projectile, it's harder than it sounds. It may not stick around for long, but Retroacan is a loving tribute to early home console games... and it's a gleeful exercise in silliness in its own right.

?? The same thing happened to the Ghostbusters fanfiction game. I wonder if they are connected at all.....

The game page encountered an error when it tried to save and publish alongside the review. All should be well now. :)

And of course, the devil of it is, it was working just fine when I previewed the article. Sheesh! :P

Key lay out is TERRIBLE!
ZXAS are too close together, I keep pressing jump when I want to jump and vice versa!