Troubleopolis! City of Action! And Adventure! And Driving! And Shooting! And, uh, Dating Sims! It's a real multi-genre kind of place in Retro City Rampage, a humorous open-world sandbox adventure game by VBlank Entertainment that sends up just about about every bit of 80s and 90s game culture you could hope to bring to your nostalgia-addled mind. It bears more than a passing resemblance to the early Grand Theft Auto releases (it actually began its decade of development under the name Grandtheftendo), but this wholly new and wholly comical experience stands on its own as a mad, mad parody with plenty of in-jokes to absorb! 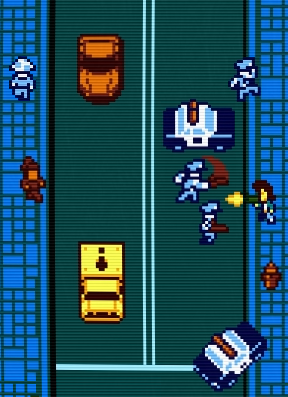 A mullet-topped Player could really make a name for himself in this town. And while that first heist with The Jester didn't go so well, at least you were able to beat up those two dweebs and steal their phone booth time machine thingy. And then break it. Good thing that Doc Choc guy believes you're some kind of chosen one. He says he'll fix that booth right up for you, if you can just find the right parts. And yeah, that's definitely on the to-do list. But there are cars to "borrow", weapons to fire, haircuts to unlock, and cheat codes to memorize. The only question is, are you a bad enough dude to handle it?

Retro City Rampage generally takes place in two modes: on foot, and while driving. While on foot, use the [arrow] keys to move around the city, and [spacebar] to jump over obstacles. Should you wish to cause a little chaos, you can use your current weapon to fire at the nearest enemy by hitting [shift], and cycle through your munition supply with [PgUp] and [PgDn]. Pick up and chuck various items, set-pieces, and citizenry with [ctrl]. If next to a vehicle, hit [enter] to "borrow" it. Once in the car, use the [arrow] keys to drive around, [spacebar] to break, [shift] to fire the car's weapon (if their is one), and [PgUp] and [PgDn] to change the radio station.

Locations labeled with an "M" icon will have story missions for you to accomplish. Travel there, get your instructions and complete tasks to get cash and unlock new bonuses, weapons and power-ups. Arcade-styled Rampage missions, based around causing as much havoc as possible with various weapons, are unlocked as story missions are completed. Various shops offer different products and character customization options for purchase. Moving down civilians will earn you cash, but do it in the eyes of the TCPD and your wanted meter will rise. Wreck enough stuff and the five-oh will be dogging your every move... at least until get your car to a Spray for Pay, or start a mission. Look out for collectible loot bags, invisible walls, cheat codes, and gosh knows what else. 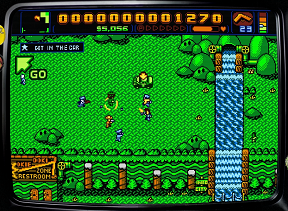 Analysis: As a game, Retro City Rampage is packed. Packed with content. Packed with customization. Packed with parodies. Just packed to the brim. From the chiptune blarings upon start-up, to the sweeping 8-bit cityscape of the title screen, to the host of faux-monitors and retro color schemes available in the options menu, Retro City Rampage might win you over before you think of hitting the play button. Don't wait too long admiring the prettiness though, because you'll be wanting much more than just to gawk at the demo mode.

Gameplay-wise, Retro City Rampage provides a nice open-world sandbox for gamers to play around in. The top down perspective is reminiscent of the earlier Grand Theft Auto games or, more accurately, the recent Grand Theft Auto: Chinatown Wars. The driving and combat is fast, loose and frenetic, and from time to time seems almost designed to overwhelm the senses. Despite the general portrayal in media, we all know that flashy retro games never actually turned anyone into a drooling pleasure zombies, but man, Retro City Rampage comes the closest. As in all sandbox games, it's ample fun just to ride around tossing trashcans at pedestrians, stealing hearses, and just generally causing mischief. (Personally, this reviewer always tended towards seeing how many people he could run down in a sirens-blaring ambulance. We're big on irony here at JayIsGames.) To be frank, though, if all you wanted was a city to wreak havoc in, there are a lot of games that already do that, and do it well. Most people looking to make a trip to this city are doing so because they want a game that references ''ALL'' the things. Rest assured, then, for when it comes to the funny, Retro City Rampage does not disappoint. 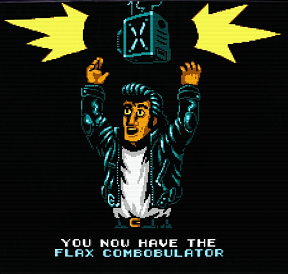 The parodies herein are a fun mix of clever, obvious, juvenile, and obscure. What really sets Retro City Rampage apart is the care with which the developers have crafted their set-pieces. In itself, Troubleopolis is practically Springfield-ian with all its humorous billboard, store names, and characters gadding about. However where the game really shines is in the levels. Most are pretty standard "Get Mission, Complete Mission, Receive Reward" yes, but Retro City Rampage leaves no chance for a gag on the table. You'll think to yourself "Wait, is this game really about to reference... YES! YES IT IS! AND IT'S AWESOME!" Or at least you will if you've got an encyclopedic knowledge of classic gaming. Another great aspect is how effortlessly the parodies transition from one to another. For instance, early in the game, main mission-giver Doc Choc will discover that his vehicle has been stolen by his rival, the evil Dr. Von Buttnik. You'll get it back eventually, but for now, he needs you to get him a bike as a temporary substitute. And where do we go? Well, to Louie, a googly-eyed former boxing-trainer who should be recognizable to any fan of Punch-Out as someone with the inside scoop on bike theft. He's happy to provide you with the bike, but in return, he'll want to to deliver some magazines for him. And so you start pedaling through a suburb, playing Paperboy to a neighborhood filled with break-dancers, remote-controlled cars, and construction workers just ready to block your path. And it continues at an break-neck pace. Admittedly, the plotting is a little shallow (and a few of the late game twists aren't presented with quite enough irony to avoid preaching to the choir), but no doubt this is a game for the NES generation, by NES generationeers, and it's done with much more love than venom. 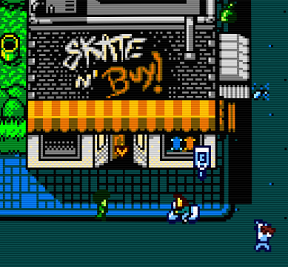 There are a few downsides, though they may end up being a matter of personal opinion. For instance, unlike Retro City Rampage's brother-in-arms Abobo's Big Adventure, the central conceit is not to perfectly emulate the gameplay of cartridges past. Instead, it is to recreate the general feel of the experience within the confines of a flexible engine. Most of the time, it works out great, but when it comes to taking on certain genres, like the mid-game Graphic Adventure parody or a late-game grueling platform section, the control scheme ends up making it a bit awkward. And, let's face it, just because a game takes the mickey out of vehicle-trailing, forced stealth missions or underwater bomb-defusing levels, doesn't make them any more enjoyable to go through. Likewise, the graphical style is not the gorgeous pixel art of today, but the totally radical retro art that only a limited color pallet can provide. It makes for a lot of jagged edges and garish neon which, while accurate, can become visually tiresome, especially as you speed around the screen.

That said, Retro City Rampage was a long time coming, but well worth the wait. It has all the little touches that show how committed the parody is (like the in-universe arcades packed with de-maked versions of modern hits like Super Meat Boy and Bit Trip Runner, or the game's hilarious adherence to old-school Nintendo of America censorship, where drinking "MILK" makes you woozy or attacking civilians will make them "GO TO SLEEP"!). It unabashedly exploits any scrap of nostalgia its audience has left in them, and the results are nothing short of exhilarating.